Indian interests in Afghanistan are the soft underbelly that the Taliban seeks out and, if these interests are systematically targeted, the results most desired by them may be achieved. 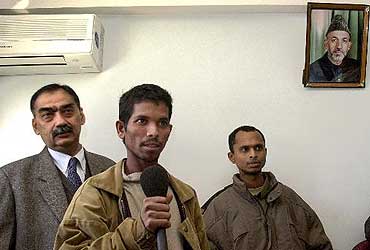 Finally the abduction drama of Indian highway technicians ended with both workers being released in exchange for 48 Taliban prisoners. The two Indians working on the Kabul-Kandahar highway, who had been abducted on December 6, 2003, from a village near Shahjoy, 280 kilometers southwest of Kabul, in the heart of the Zabul province, were freed on December 24, 2003. Sources close to the Taliban maintained that the strategy to target Indian interests in Afghanistan was evidently successful, and prevailed over the nerves of the Northern Alliance-dominated Kabul Government, which has very special relations with India.

The kidnapping was a very different kind of operation that took place in the South Eastern Afghan province of Zabul. Though Taliban spokesmen had called several news organizations claiming responsibility, Afghanistan's Interior Minister Ali Ahmed Jalali's claim that the kidnappers had no connection to the Taliban movement and that they were local people, was partly correct.

Sources across the Pak-Afghan borders maintained that local tribes, whose members were arrested by the Karzai administration, were the real element behind the abduction, which was intended to get their own relatives released. During and after the abduction, the local Zabul administration did not display any significant resistance, as it is itself heavily penetrated by sympathizers of the former Taliban regime.

The kidnappers were not members of the Taliban force, but local residents who conducted the operation to get their fellow tribesmen, who happened to be Taliban cadres, released. However, in later days they shifted their captives to the Taliban's safe sanctuaries in Zabul's mountainous terrain. Zabul is, in fact, an ideal place for such abduction operations.

The overwhelming majority in the province comprises Taliban sympathizers, including many in the local administration. The province is surrounded by the most difficult mountainous terrain and there is a network of Taliban safe havens as well as a widespread support base among local tribes. The support of the local tribesmen was critical in eventually ensuring that the 48 Taliban cadres were set free by the Afghan administration.

Strategically speaking, the Zabul province is the birthplace of the Taliban. It was the first province to be occupied by the student militia when they emerged against the warlordism of different Jehadi factions in the early 1990s. Even after the US toppled the Taliban Government, this is the place that has been occupied by the Taliban several times over the past weeks.

Before any attack, the Taliban leaders send warning messages to the administration not to resist, and this is taken seriously, with most administration officials fleeing before the Taliban arrive, and others offering little resistance. The Taliban then take over the offices for a few hours, hoist their white flag and then leave notes on the wall, declaring that they can take over Afghanistan 'any time'.

In most of the South Eastern Afghan belt, the Taliban resistance enjoys widespread support, since many of the Taliban leaders come from South Eastern areas of Zabul, Hilmand, Kandahar and Oruzgan provinces. According to tribal traditions, moreover, their safety is guaranteed by their tribes. If they seek refuge after a guerilla operation, they are given shelter; and if US troops come after them and conduct house-to-house search operation, they are easily transported over the mountainous terrain into neighboring Pakistan, where they hide until the danger is over.

At this point in time, the resistance against the US presence in Afghanistan and against the rule of Northern Alliance is in search of Kabul's vulnerable underbelly and soft targets. Besides western targets, including aid workers currently operating in the country, Indian interests are widely believed to be easy targets that can force concessions from the Afghan Government. Indeed, a strategy to target Indian interests in general has been widely developed among the resistance forces, for a number of specific reasons.

Most significantly, the Pakistani propaganda machinery has very effectively spread the information that 'all Indian outfits', whether NGOs or commercial organizations, are part and parcel of the Indian 'strategic community' which aims to help strengthen the Northern Alliance rule in Afghanistan. Most of the Northern Alliance leadership has very special and personal relations with New Delhi. Dr. Abdullah Abdullah, General Fahim, and several other ministers and leaders have had long periods of residence in Delhi. So if Indians are targeted it is natural that the Northern Alliance leadership would take this seriously and would try its level best to rescue them.

Strikes on Indian targets could also force Indian investors to pack their bags and go back home. This would create a serious mess in current development projects and efforts, and could ultimately make the situation more and more chaotic. Such chaos and anarchy helps the Taliban carry the resistance forward. The inevitable conclusion is that Indian interests in Afghanistan are the soft underbelly that the Taliban seeks out and, if these interests are systematically targeted, the results most desired by them may be achieved.