'Take The Fight Far Beyond'

'The Prime Minister and the Congress Party have exhibited unbelievable weakness in challenging the communal and criminal pressures of Gujarat politics ... Modi is all out to commit another heinous crime against humanity ... He is falsely projecting h 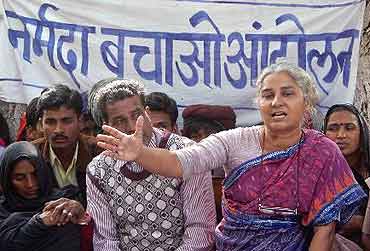 The Supreme Court has taken cognizance but has not stayed the on-going construction of the dam. It has, for the time being, permitted Modi and his coterie to commit another crime, this time 'jalhatya'. I feel shattered, but with some hope that the truth will prove itself within the next fifteen days, that is by May 1st.

The centre has exhibited utter disrespect for the facts on the ground and even the first-hand report of its own three Union Ministers, while falling prey to the pressures by Modi and Gujarat Congress as his ally. Modi is all out to commit another
heinous crime against humanity; his betrayal of Gujarat in this will also be proved. He is falsely projecting his own and the BJP's gain as Gujarat's victory.

The Prime Minister is, on one hand, saying that he is yet to study the Ministers' report, while the Additional Solicitor General of India has already made a statement that is illegal and baseless, even laughable. Who can believe that rehabilitation of thousands of families can be completed within three months, or before the monsoon flood, when the governments have not been able to locate agricultural land or adequate land for housing over the last 25 years?

The Prime Minister and the Congress Party have exhibited unbelievable weakness in challenging the communal and criminal pressures of Gujarat politics. The PM has not yet used his powers and authority vested in him by the Supreme Court judgement of 2000, nor has he acted on his own Ministers' report.

The case of Narmada has once again proved a total subversion of the system, from its democratic framework to rationality and scientificity, to honesty as well as integrity before ugly and selfish political motives.

The truth cannot be concealed beyond a limit. When it is revealed, the dam may then prove to be a tomb marking the death and devastation of lakhs of adivasis and farmers whose massacre, not suicide, will go down in history. But this dam will also become a death knell for future big dams and development that victimise the toiling masses and communities that are nature-based. We warn the Centre and all three state governments on this. The state has not responded favorably to the non-violent people's movement of adivasis, dalits, farmers who are supported strongly by civil society, and are committed to justice.

Instead the state has acted in favour of violence in the name of development. They seem to be under pressure from violent communal and corporate politics in Gujarat. Yet, they still have fifteen days to act with courage and conscience.

The UPA government has not chosen the right path, and if it doesn't do so even now it will be compromising on its integrity as a council of Ministers, its Common Minimum Programme as well as its so-called secular politics and the 'human face of development' argument. It should not any more prove to be toothless and truthless.

The people of the Narmada valley along with all victims of development will fight to the finish, for life. We will do everything to expose the barbaric game that is playing itself out across the country at the cost of 'oustees'.

The truth buried under the false and farcical hype will soon be known to the people of Gujarat as well, who understand the displacement faced due to the earthquake in Kutch in 2001.

We are now determined to take up the fight far beyond ... me and my two other comrades, Jamsinghbhai and Bhagwatibehen have to move from our 21-day long fast back to fight with the unprecedented challenge again.

We certainly feel pain and anguish over the state of our country, the constitutional rights being crushed underfoot by criminalised communal politics. We, however, will return to the valley, thanking and involving all those who are now an inseparable part of our 'National People's Movement for Just Development'. We call to the nation to join us to save the river valleys and also our country.