Swift Superstar Of The Week

His speed, jumping ability and awareness of the game combined with the technical skill that all top Italian players possess makes him 'the best pure defender in the world'. 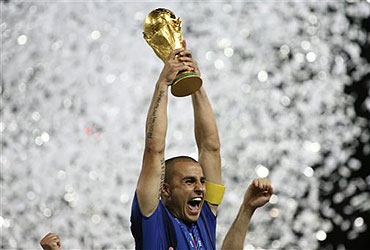 outlookindia.com
-0001-11-30T00:00:00+05:53
Many experts pick for the Golden Ball (the prize awarded for the best player of the tournament), especially in light of Zidane’s spectacular display of his volatile nature, Fabio Cannavaro certainly left his mark on World Cup 2006. Skipper of the first Italian side to claim the trophy since 1982 and by far the best centre back of the tournament, he carried his side to victory on the day he made his 100th appearance for the Azurri. Cannavaro is also the first defender to finish with the ‘Silver Ball’ since Lothar Matthaus led Germany to victory in 1990.

Apart from the pressure of captaincy, Cannavaro was forced to cope with the loss through injury of regular central defensive partner Alessandro Nesta, breaking up one of the finest defensive alliances in the world. The man who took Nesta’s spot, Marco Materazzi (goalscorer and head butt victim in the final), proved adept at grabbing the headlines but left Cannavaro with more than his share of defensive work. Cannavaro was able to compensate, using his unique positional sense and ability to read the game intelligently. It is these attributes that have made him a player coveted by almost every top club coach in the world. Recent rumours have linked him with a move from relegation-threatened Juventus to Real Madrid.

Earlier in his career Cannavaro was often considered too short to be a central defender, but he has revelled in the responsibility with glittering displays for both Italy and every club he has played for. His speed, jumping ability and awareness of the game allows him to make invaluable interceptions and combined with the technical skill that all top Italian players possess he is rightly regarded as "the best pure defender in the world."

Cannavaro made his international debut in January 1997 against Northern Ireland and has since been a mainstay of the Italian team, suffering disappointment in the last three World Cups and the final of Euro 2000. He is also considered something of a ladies man in Italy. As if being captain and star of the team that brought the Azurri the World Cup was not reward enough, he beat out the likes of Beckham and Totti to walk off with the Sexiest Player of the Tournament award.