Anthony Quinn, the screen Zorba, passes away at 86 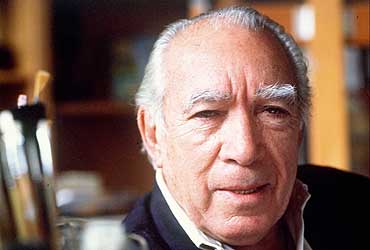 Anthony Quinn, the barrel-chested oscar winner remembered for his roles as the earthy hero of "Zorba the Greek" and the fierce Bedouin leader in "Lawrence of Aabia," has died. He was 86.

Quinn's death was reported by Povidence, Rode Island, Mayor Vincent "Buddy" Cianci, a friend of the actor. He said Quinn died of respiratory failure at a Boston hospital.

"He was larger than life," Cianci said. "I was proud to call him a friend."

Quinn was living in Bristol, near Providence.

Quinn, who appeared in more than 100 feature films, also won academy awards for best supporting actor in "Viva Zapata!" and "Lust for Life."

Born in Mexico and raised in poverty in east Los Angeles, Quinn went from stage and B-movie roles to become an international leading man renowned for his big-man sensitivity and honest acting style.

In a film career that spanned almost 30 years, Quinn portrayed characters ranging from kings to Indians, including a pope, a boxer and an artist.

"I never get the girl," Quinn once joked in an interview. "I wind up with a country instead."

He won his first Oscar for his work in the 1952 film "Viva Zapata!" as the brother of Mexican revolutionary leader Emiliano Zapata.

To many, Quinn's oscar-nominated characterization of the Greek peasant Zorba from the Nikos Kazantzakis novel remained his most memorable role.

The Ouzo-drinking and ouzouki-dancing Zorba was his favourite role, so much so that he returned to the stage in 1983 in a revival of the musical that inspired the 1965 film.

As a child, he shined shoes, sold papers and preached with Aimee Semple Mcpherson. After working as an movie extra, he met and married the adopted daughter of Cecil B. De mille, Katherine.

A real-life artist, sculptor and author, his role as painter Paul Gauguin in the 1956 film "Lust for Life" earned him his second Oscar.

He left Hollywood for Italy, as leading roles became lesser: "What could I play there? They only think of me as a Mexican, an Indian or a Mafia don," he told AP in 1977.

He was divorced from Katherine in 1965 after he fathered two children with Italian costume designer Yolanda Addolari.

In 1972, Quinn wrote his autobiography, "The Original Sin," which has been translated into more than 18 languages. He followed with a second volume titled "Suddenly Sunset."

The straightforward actor shunned the use of ghost writers, favouring blunt honesty over Hollywood image-making.

"I could either lie or tell the truth," he said. "I figured the only value in such a book would be to describe my life as I lived it."

Quinn said in a 1987 interview that he reached most of the goals he set for himself as a young boy.

"I never satisfied that kid but I think he and I have made a deal now," he said, referring to his younger self.

"It's like climbing a mountain: I didn't take him up Mount Everest, but I took him up Mount Whitney. And I think that's not bad." Who could disagree?