The recent Supreme Court judgement banning government employees from going on strike has, among others, the Attorney General of India terming it 'uncalled for' and 'beyond comprehension'. 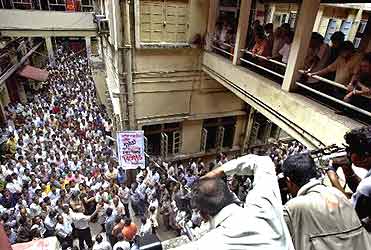 In a fresh bout of judicial activism, the Supreme Court of India, last week, banned government employees from going on strike. In a sweeping statement a two-judge bench declared that government servants had no fundamental, legal or moral right to strike work. An extremely provocative stand that led many legal minds and constitutional experts to declare that the Supreme Court this time had overstepped its brief and that the observation was most unfortunate and undemocratic.

For the trade unions, already grappling somewhat unsuccessfully with the harsh realities of globalisation, this judgememt came as a deadly blow. "This judgement hits at our core activity rendering us less effective,' says DL Sachdev, secretary, All India Trade Union Congress (AITUC). Adds Hasubhai Dave, all-India president of the Bharatiya Mazdoor Sangh (BMS), "The right of collective bargaining (which the SC recognises) has no meaning if the right to strike is taken away."

The constitution does not explicitly talk of the right to strike. It is not a fundamental right. But trade unionists argue that because the constitution provides the freedom of expression and since strikes are another form of expression, the Supreme Court order is in effect unconstitutional. And they are unwilling to accept that this "right" could be open to judicial interpretation.

The Supreme Court was forced to take up the issue of the right to strike when a petition challenging the dismissal of nearly two lakh employees of the Tamil Nadu government came up for hearing. The employees were protesting the withdrawal of certain pensionary benefits by the state government. But the latter responded by invoking the Essential Services Maintenance Act (ESMA) to dismiss the striking workers. Under ESMA, strikes are illegal. To the court's credit, it did offer practical relief by  asking the government to take back most of the striking workers, but the relief came with a rider - it also asked them to tender an unconditional apology and to promise not to go on strike in future. The court observed that the government employees cannot hold society to ransom by going on strike and that strike as a weapon was mostly misused and resulted in chaos and total maladminstration.

It is the Industrial Disputes Act (IDA) which gives workers the right to strike under certain conditions:  for example, if they are working under inhuman conditions. But they have to give a notice of 14 days. This notice is critical for the strike to be considered legal. While most government departments, including PSUs,  are covered under the IDA, the government can in almost all cases invoke ESMA when it wants to deal strongly with striking workers, as "essential services" are entirely defined by the state governments. Says labour expert Professor CS Venkataratnam, "By invoking ESMA, the government can ban strikes. It is considered a dark legislation, but as long as it is on the statute book, like POTA (Prevention of Terrorism Act), it can be used by the government."

But Ratnam adds that the judgement is not unconstitutional because he feels that there is no direct or automatic relationship between the freedom of association and right to strike. He says that neither in the Indian Constitution nor in the ILO (International Labour Organisation) standards have the two been equated. In fact, with regard to ILO standards, India has ratified neither Convention No 87 (Freedom of Association and Protection of the Right to Organise) nor Convention No. 98 (The Application of the Principles of the Right to Organise and to Bargain Collectively)

The trade unions on their part would like to wipe out this ambiguity. They are going to petition the Prime Minister to seek an amendment in the Constitution so that the right to strike gets a clear mention. "Today out of the four crore plus people employed with the government, only about 2.5 crore are covered under the Industrial Disputes Act. We would like the others who work in departments like electricity and transport (that are defined as essential services) to also be given the right to strike," Dave argues.

The trade unions have also planned to lobby against this order with the President of India and have planned a nation-wide demonstration. One trade union leader says, "Inspite of the court order, those who have to go on strike will, this is not going to work as a deterrent." The militant mood is evident, but trade unions might be fighting a losing battle. All over the world, trade unions have enjoyed power and strength only as long as state patronage continued. Once the state becomes neutral, their power is neutralised and when the state decides to defend employer interests, the unions get marginalised. And in an ecomomy trying to liberalise, like India's, stories about the growing marginalisation of trade unions and workers are bound to grow.

While even the Attorney General of India, Soli Sorabjee, agrees that strikes cause grave inconvenience to the public, he has come out strongly against the apex court's verdict, calling it "uncalled for" and "beyond comprehension". He has pointed out that the right of collective bargaining and the ancillary right to strike is an invaluable right of employees secured after years of struggle and that there could be "horrendous situations in which the employees have no effective mechanism for redressal of their grievances and are left with no option but to resort to strike".

Supreme Court lawyer, Prashant Bhushan is equally direct: "the Supreme Court order is contrary to the law and to earlier judgments. It is one thing to say that workers in essential services cannot strike, but quite another thing to club all government employees together." Another Supreme Court lawyer, Bina Madhavan, feels that the two-judge bench ought to have referred to all precedents before coming up with this directive.

In fact, the Supreme Court in its order has also stayed away from discussing the merits or demerits of the Tamil Nadu Government invoking ESMA by passing an ordinance overnight. Lawyers feel that the court should have discussed these issues before passing a statement that in fact reprimands workers.

Despite the heated debate over the issue, the harsh reality of our times is that the trade union movement which is at such a vulnerable state in the country, stands to be further decimated by this pill of judicial pro-activism.