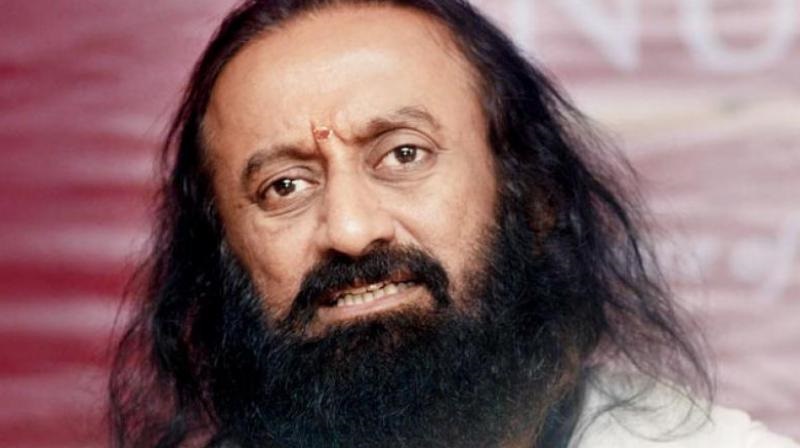 Art of Living founder Sri Sri Ravi Shankar on Tuesday renewed his appeal to the All India Muslim Personal Law Board (AIMPLB) to consider an out-of-court settlement to the Ram Janmabhoomi row, saying he feared a "large-scale" communal flare up if the case was settled by a court or through legislation.

In an open letter to the AIMPLB members, he said going through the court was a loss for both Hindus and Muslims and an out-of-court settlement would be a "win-win situation" for both the communities.

"I urge the leaders of both faiths to take this action seriously. Otherwise, we are pushing our country to the brink of a civil war," said Ravi Shankar, who has been making persistent mediation efforts, meeting Muslim and Hindu leaders, to find a solution to the dispute.

He gave four possible situations -- the court giving away the land to the Muslims, awarding the land to the Hindus, upholding the Allahabad High Court order that says there should be a mosque built on one acre whilst the remaining 60 acres be utilised to build the temple and Parliament passing a legislation.

"In all the four options, either through the court or through the government, the result will be devastating for the nation in general and the Muslim community in particular," he said.

Ravi Shankar said the best solution would be an out-of-court settlement, in which the Muslim bodies come forward and gift one acre of land to the Hindus, who, in turn, would gift five acres of land nearby to the Muslims to build a bigger mosque.

He also told the AIMPLB leaders that Islam permitted the shifting of the mosque to another location and that cleric Maulana Salman Nadvi and many other Muslim scholars had endorsed it.

Ravi Shankar, however, said, "Muslims are not surrendering this land to the people who demolished the Babri Masjid or to a particular organisation.

"On the contrary, they are gifting it to the people of India. They must keep this in their minds and spirit. It is only reconciliation and an expression of their broad- mindedness, benevolence, magnanimity and goodwill."