Sri Lanka's Chamari Atapattu smashed a quick-fire half-century as two-time champions Supernovas reached their third successive final with a narrow two-run win over Trailblazers in a last-ball thriller at the Women's T20 Challenge in Sharjah on Saturday.

After the final league game, all the three teams ended with two points each but Supernovas (-0.054) and Trailblazers (+2.109) qualified due to their better nett run-rate than Velocity (-1.869) in the three-team competition.

The Harmanpreet Kaur-led Supernovas will now take on Trailblazers captained by Smriti Mandhana in Monday's final.

Opting to bat, Chamari Atapattu laid the foundation with an aggressive 48-ball 67, which was studded with five fours and four sixes. Harmanpreet then played some big shots (31 off 29) to take the team to 146 for 6.

In reply, Deepti Sharma (43 not out) and Harleen Deol (27 off 15 balls) took the chase deep but Trailblazers could only manage 144 for 5 in the end, courtesy a superb last over by left-arm spinner Radha Yadav (2/30).

For Supernovas, the spinners did a fine job with Anuja Patil (1 for 18) and Radha drying up runs in the middle while medium-pacer Shakera Selman picked up two wickets.

Trailblazers were off to a good start to their chase with Deandra Dottin (27) and Mandhana (33) raising 43 for no loss in the first six overs.

But Shakera Selman struck twice in the seventh over, first trapping Dottin LBW and then cleaning up Richa Ghosh (4).

Deepti and Mandhana tried to repair the innings but Anuja, who came in for Pooja Vastrakar, caught and bowled the skipper in the 13th over to reduce Trailblazers to 83 for 3. Deepti then kept them in the hunt but Trailblazers could only score seven out of the 10 runs required in the last over.

Earlier, Atapattu notched up the first fifty of the Women's T20 Challenge and added 87 for the opening wicket with Priya Punia (30 off 37).

However, Trailblazers spinners Harleen (1/34) and Salma Khatun (1/25) pulled things back after 10 overs, giving away just 23 runs in next five overs.

Atapattu amassed 14 runs in the 16th over with a four and six, while Harmanpreet exploded in the 19th over, smashing a four and a six to pile up 15 runs to swell the total. 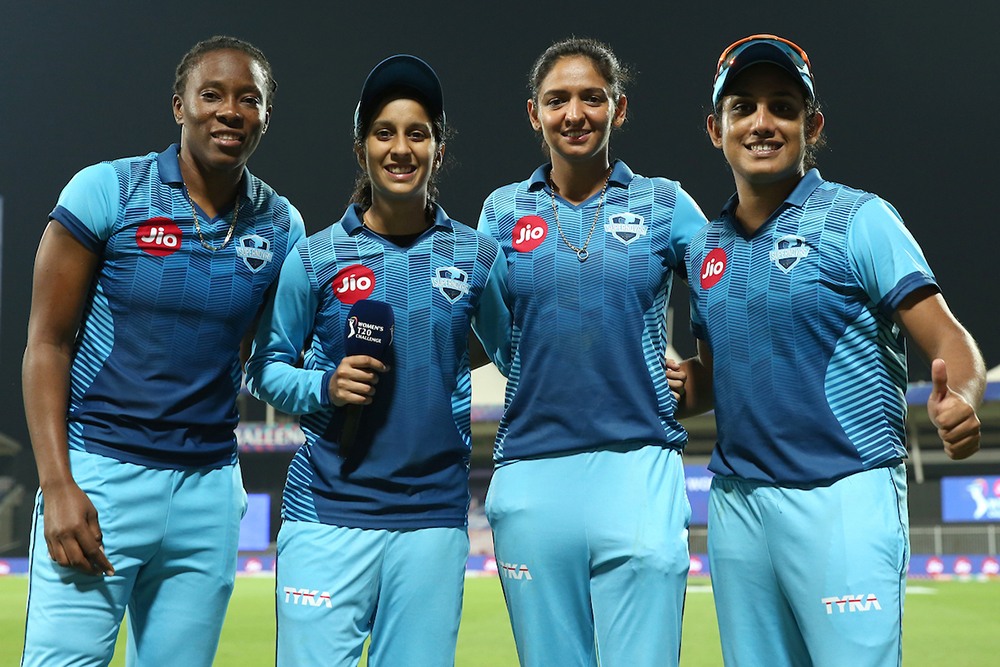 (From left) Shakera Selman, Jemimah Rodrigues, Harmanpreet Kaur and Chamari Atapattu of Supernovas after the win against Trailblazers in Sharjah on Saturday. Photo: BCCI

Left-handed opener Atapattu looked for runs from the word go and made her intentions clear with two boundaries in the second over of the innings bowled by Deepti Sharma.

Later in the fourth over, the Sri Lankan nonchalantly hoisted one over mid-off for a six and then swept Deepti for a boundary as Supernovas amassed 15 runs.

Atapattu's opening partner Priya Punia, who got off the mark in her ninth ball, played second fiddle as the duo scored fifty in the powerplay.

Priya, on 17, got a reprieve when Dottin dropped a catch off Rajeshwari Gaikwad's bowling.

The two kept scoring at a brisk rate with Atapattu not afraid to go for lofted shots, while Priya too rotated the strike and also picked up three boundaries.

Priya fell when her attempt to clear the fence saw Deepti pull off a superb catch running forward off Khatun. She added 89 runs for the first wicket with Atapattu.

Atapattu reached her fifty from 37 deliveries with a powerful sweep off Harleen. The Sri Lankan was holed out by Hemalatha off Harleen's tossed up delivery in the 17th over.

For Trailblazers, experienced Jhulan Goswami was the best bowler with figures of one for 17 from 4 overs, while Harleen and Khatun picked up a wicket each. There were also three run-outs in Supernovas' innings.