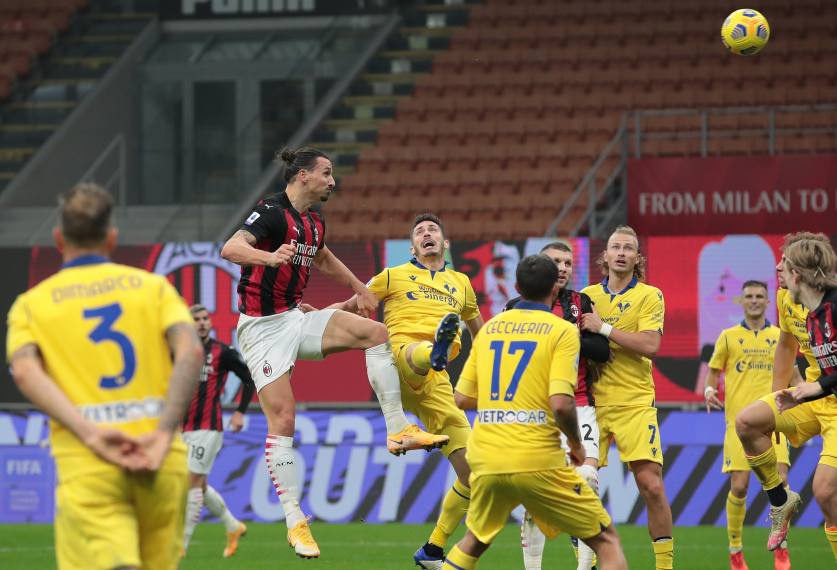 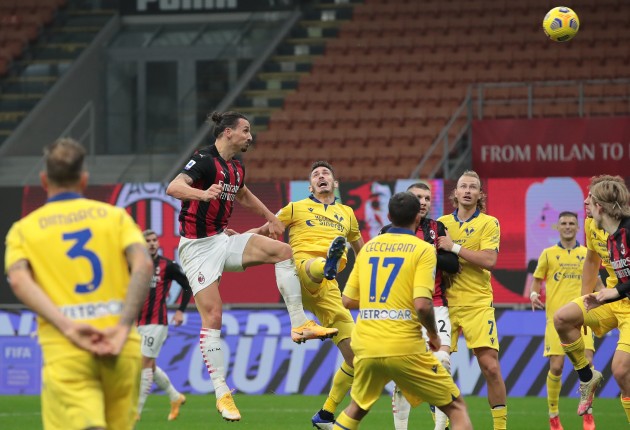 Milan: Last week it was an acrobatic overhead winner that belied his 39 years. This week it was a towering header in stoppage time that secured AC Milan a 2-2 draw with Hellas Verona on Sunday and a two-point lead atop Serie A entering the international break.

Game after game, Zlatan Ibrahimovic keeps showing that his markers are defenseless against him inside the penalty area.

So much so that Ibrahimovic was asked if he thought that Italian defenders had dropped in level in the eight years between his first and second stints with Milan.

"Or maybe Ibra is stronger," was his reply, with a laugh.

The Swedish great scored braces against Bologna, bitter rival Inter Milan in the derby, and Roma this season. His eight goals in five matches -- he missed two games after testing positive for the coronavirus -- top the Italian league's scoring chart.

"I think he can play until he's 45 in our league," retired Italy defender Giuseppe Bergomi said last weekend.

"I really mean that."

Having lost 3-0 at home to Lille in the Europa League on Thursday to end a 24-match unbeaten run in all competitions, Milan fell behind 2-0 to Verona before Franck Kessie — whose flicked shot was deflected in off a defender — and Ibrahimovic rallied the Rossoneri.

It wasn't all easy for Ibrahimovic this time, though. He missed a penalty with a miserable effort high over the bar at his first chance to equalize, then ruined a potential equaliser from Davide Calabria with a handball before finally finding the target three minutes into added time by leaping over a defender.

"Fortunately the break for international duty is here, because I need rest," Ibrahimovic said. "I didn't have the sharpness and usual determination I have in front of goal. I just felt like I wasn't all there."

Milan are two points ahead of Sassuolo, three ahead of Napoli and Roma and four ahead of Juventus and Atalanta.

Lazio scored another stoppage-time goal to rescue a 1-1 draw at home to Juventus.

Juventus appeared to be heading for a win and into second spot after Cristiano Ronaldo's first-half goal but substitute Felipe Caicedo pounced deep in stoppage time.

Caicedo had netted a stoppage-time winner in Lazio's last league match — against Torino — and also scored late at Zenit St. Petersburg on Wednesday to salvage a 1-1 draw in the Champions League.

"We were convinced something would happen," Caicedo said.

"Juventus didn't play for the last 15 minutes. We never give up."

Lazio were missing a number of players, including European Golden Shoe winner Ciro Immobile, after conflicting results for tests for COVID-19.

Juventus took the lead in the 15th minute when Juan Cuadrado beat a couple of Lazio defenders on the right before sending in a low cross for an unmarked Ronaldo to tap in from point blank range.

It was Ronaldo's third goal in his two league matches since recovering from the coronavirus, which kept him out for three weeks.

Both Inter and Atalanta were looking to recover from midweek defeats in the Champions League against Real Madrid and Liverpool, respectively, and they also came away with a 1-1 draw.

Inter broke the deadlock in the 58th when Ashley Young crossed in from the left and, with his back to goal, Lautaro Martínez flicked a header into the far corner.

Substitute Aleksej Miranchuk leveled 11 minutes from time, drilling into the bottom right corner from the edge of the area.

Napoli moved up to third with a 1-0 win at Bologna, where Victor Osimhen scored with a header.

Genoa slipped into the relegation zone after Torino drew 0-0 with bottom-place Crotone to move above Genoa on goal difference.