Check match and telecast details of the winners take all, fifth and final T20 International cricket match between the West Indies and South Africa 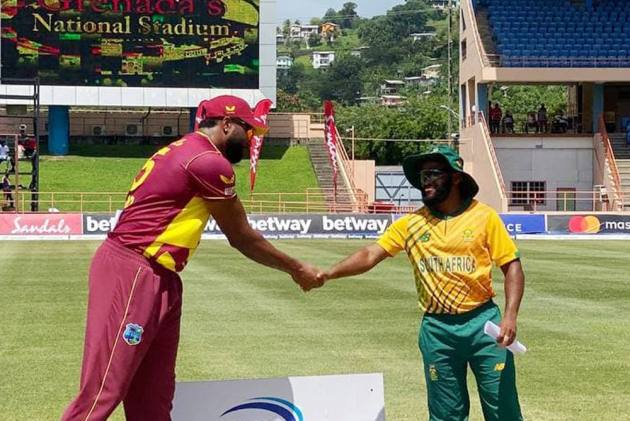 Four matches, two wins each and a mouth-watering prospect -- two star-studded teams fighting it out for a T20 series win in a World Cup year. Then there is hurricane Elsa. No matter what, the rain will be there in Grenada as the tropical storm continues to make its presence felt in the Lesser Antilles. But what the West Indies and South Africa need on Saturday is a window of some three hours to settle the series. (More Cricket News)

Windies, who lost the two-match Test series 0-2, started the T20Is on a rousing note, thrashing the Proteas by eight wickets with five overs to spare. After all, they are two-time T20 world champions. An ensemble cast, featuring some of the biggest names like Kieron Pollard, Chris Gayle, Andre Russell, Dwayne Bravo, etc fire in unison. It certainly looked intimidating. But they lost the next two, failing to chase down 160+ targets. Then, in the penultimate match skipper, Pollard first hit a 25-ball 51, then Dwayne Bravo claimed four wickets for 19 keep the series alive.

For South Africa, Quinton de Kock remained the key player, and the wicketkeeper-batsman found support from the likes of Reeza Hendricks and Rassie van der Dussen, even as skipper Temba Vabuma hit a classy 46 in the second match. But they still need a finisher, with David Miller so far failing to do his job.

De Kock, the lone batsman to breach to 200-run mark in the Test, leads th scoring charts with 195 runs, followed by Evin Lewis, on 126, from four innings each. Van der Dussen is third with 96.

Bravo leads the wickets chart with nine scalps, followed by Obed McCoy (8). South African spin duo Tabraiz Shamsi (6) and George Linde (5) are so miserly, and with the wicket slowing down, they can once again frustrate the Windies.

Windies are looking for back-to-back series wins, after beating Sri Lanka 2-1; while South Africa are chasing their first win in seven series. Their last series win was a 3-0 drubbing of Sri Lanka in 2019.