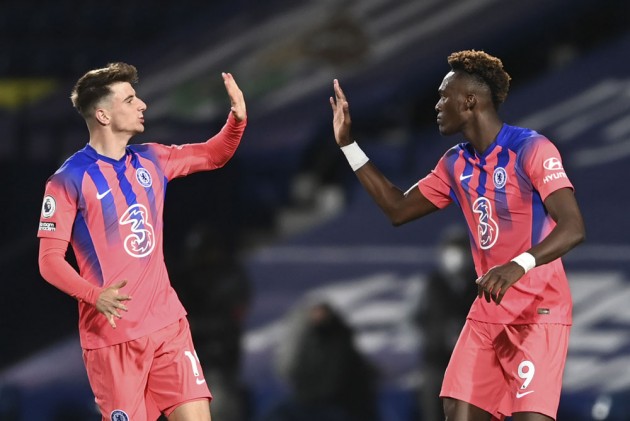 The Baggies were gifted three goals inside 27 minutes at The Hawthorns with Callum Robinson scoring twice after shoddy defending from Marcos Alonso and 36-year-old Premier League debutant Thiago Silva.

Kyle Bartley made it 3-0 after more poor work at a corner but Mason Mount's well-struck 55th-minute effort was backed up by substitute Callum Hudson-Odoi putting the finishing touch on a great Chelsea move.

West Brom then buckled under the sheer weight of pressure in five additional minutes as Abraham tapped in from close range after Sam Johnstone saved Mount's shot.

27 - Chelsea were 0-3 down after 27 minutes against West Brom - only against Manchester City in February 2019 (19 mins) have they been three goals down earlier in a Premier League match. Shock. pic.twitter.com/393NqERHu6

Abraham missed a sitter and Timo Werner wastefully crashed against the crossbar before another error, this time Silva's dallying and slip, allowed Robinson to slide under Caballero to double the lead.

Incredibly it was 3-0 when Bartley unerringly slotted in from Darnell Furlong's downward header at Pereira's corner with Chelsea's defending again suspect.

Alonso and Mateo Kovacic were sacrificed for Cesar Azpilicueta and Hudson-Odoi at the break and a high-tempo Chelsea reduced the arrears with a crisp long-ranger from Mount that left Sam Johnstone flat-footed.

A fine Chelsea move culminated in Hudson-Odoi linking brilliantly with Kai Havertz before coolly finding the bottom-right corner to really get West Brom nerves jangling with 20 minutes to go.

West Brom were penned further and further back as time wound down and Abraham earned Chelsea the point after reacting quickly when Johnstone could only parry Mount's effort.

What does it mean? Big-spending Blues must gel quickly

Chelsea may have just avoided defeat but after Lampard was backed by a spending spree in excess of £200million he will not have the luxury of the patience he was afford last season.

With new recruit Ben Chilwell to come in at left back and Edouard Mendy surely to take over in goal after arriving from Rennes – with Kepa Arrizabalaga again benched – you would expect Chelsea to shore up. They must do so quickly.

And here's to you Callum Robinson…

Robinson has three Premier League goals to his name, all against Chelsea (one was for Sheffield United). His first was, in truth, only a half chance despite Alonso's helping hand and he scored with both of his shots on target.

Lampard has no case for the defence

Silva was brought in on a free transfer to shore up a leaky backline as Chelsea spent big elsewhere. He was far from the only culpable party in a mind-boggling show of first-half ineptitude but he certainly did not help.

Chelsea have made three errors leading to goals this term, the same amount as the whole of last season. Throw in 42 away goals conceded since the start of last season, more than any other side, and there are still big defensive concerns for the Blues.

42 - Since the start of last season, Chelsea have conceded more away Premier League goals than any other side (42). Open. pic.twitter.com/Gvs4YhuWns

Chelsea switch focus to Tuesday's EFL Cup fourth-round tie at Tottenham, while West Brom are next in action at Southampton in the Premier League on October 4.