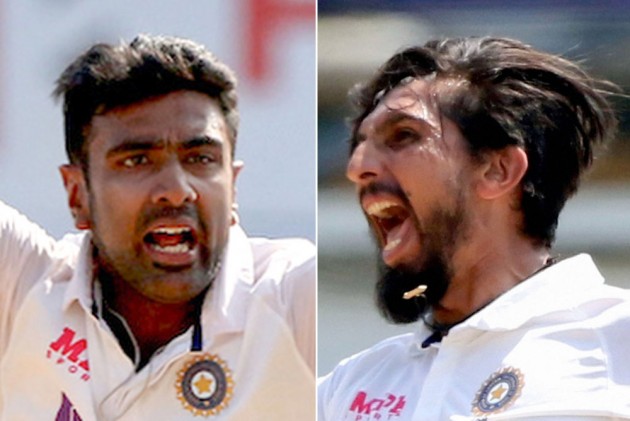 Ishant Sharma's work ethic has been exemplary over the last 14 years, feels Ravichandran Ashwin, who wishes to see his India teammate enter the 400-wicket club and set a bench mark for the emerging quicks of this country.

Ishant, the most-capped Test player in this current line-up, on Monday, became the third Indian pacer after Kapil Dev (434 wickets) and Zaheer Khan (311) to reach the 300-wicket milestone.

"Look, Ishant has been one of the most hard-working cricketers, that I have seen in that Indian team dressing room.

"He has worked extremely hard, for more than just one reason, because being that tall (6 ft 4 inch) itself requires a lot of facets to be managed through a career which is spanned out through almost 14 years now," said Ashwin, who himself, is 15 wickets short of the 400-mark.

Ishant is only two short of 100 Test appearances and will only be the second pace bowler from India to achieve that coveted landmark.

For Ashwin, that itself is a measure of his achievement.

"Ishant, who went to Australia and got Ricky Ponting out (in 2007-08), and then has gone through so many other tours, had his fair share of injuries, for a fast bowler to get close to 100 Tests in India is not a joke and it is fantastic fantastic achievement," said the wily off-spinner.

"I can keep going on and keep complimenting Ishant, but I really wish to see him get to 400 and probably 500 wickets, which should be sort of road map for a lot of Indian quicks going forward."

So what's it that makes Ishant Sharma special as a person?

"If I have to say something about Ishant, his biggest plus is the smile. He is ever smiling. Even if he is very tired, he is smiling.

"Today, I jokingly told him that you won't get a bowl. He (Ishant) said that's ok because he was really tired. He is a man with a funny streak," added Ashwin.