Kohli was surprised that Shardul, who took four wickets for 67 runs, and Bhuvneshwar, who took six wickets in the series at an economy rate of 4.65, didn't win any awards 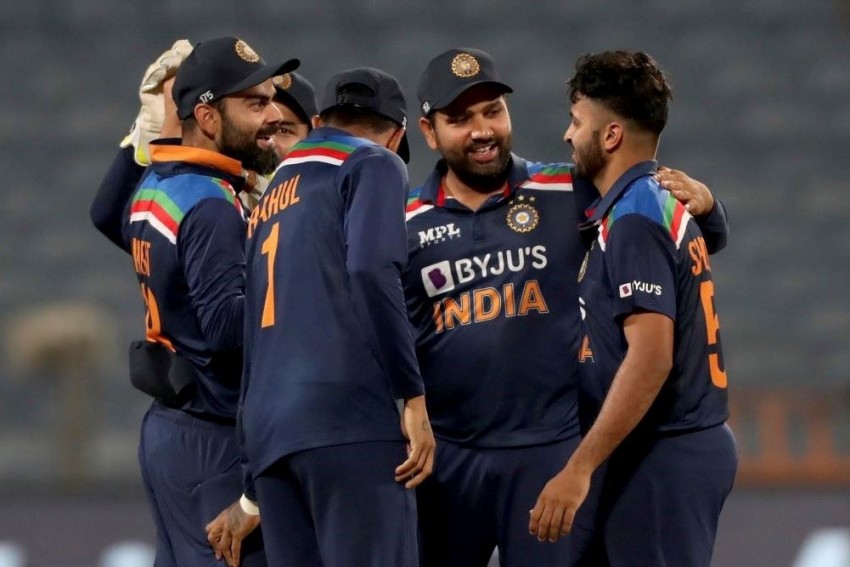 Virat Kohli, left, and Shardul Thakur, right celebrate with teammates the dismissal of England's Adil Rashid during the third One Day International match between India and England at Maharashtra Cricket Association Stadium in Pune, India on Sunday.
AP Photo/Rafiq Maqbool
PTI 2021-03-29T08:30:47+05:30 Virat Kohli Praises His Man Of The Match Shardul Thakur And Man Of The Series Bhuvneshwar Kumar 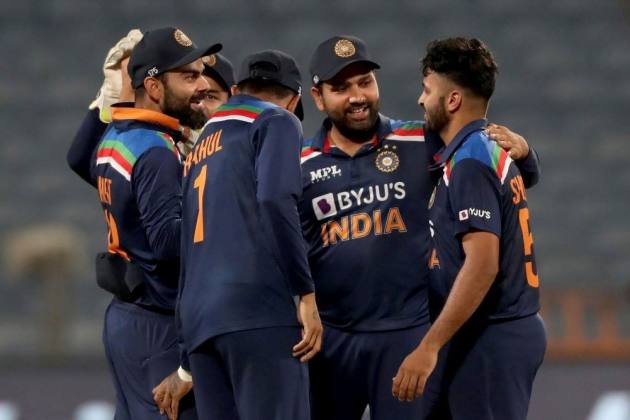 India captain Virat Kohli on Sunday said he was surprised that Shardul Thakur was not adjudged man-of-the-match for the third and final ODI against England and Bhuvneshwar Kumar missed the man-of-the-series honours despite strong performances.

Sam Curran was handed the man-of-the match award for his heroic 83-ball 95 not out in a lost cause as India won the third ODI by seven runs to clinch the three-match series 2-1. Shardul took four wickets for 67 runs but conceded 18 runs in the 47th over to give England a shot at victory.

England top-order batsman Jonny Bairstow got the man-of-the-series award for his 219 runs in the three games, including a hundred to top the run-scorers' chart. Bhuvneshwar took six wickets in the series at an economy rate of 4.65 and an average of 22.50.

India dropped at least four catches, including that of Curran, at crucial junctures to pile on the pressure but Kohli sought to play it down.

"It's most disappointing for the guy who drops the catch, but as much as you get disappointed, catches get put down and sometimes they cost you. That is a part of the game.

"There's no lack of intent, and our body language was outstanding. Eventually we got over the line," he said.

Asked about the intensity shown by both the teams in the white-ball leg, Kohli said, "When the top-two teams battle each other, we'll get exciting games. We knew England are not going to throw in the towel, and Sam played a really good innings to keep them in the hunt.

"However, our bowlers picked up wickets, and it moved from us finishing it off to them getting over the line before Hardik (Pandya) and Nattu (T Natarajan pulled it back. Prasidh (Krishna) and Krunal (Pandya) were impressive.

"But death overs batting was extremely good, despite the early wickets, and if the top three can get a hundred, then we can get 370s and 380s later.

"This win has been sweet because it's against the top team in the world, and we're looking forward to the IPL. It's been an amazing season, series, and this was a great way to finish it off."

Asked about two months inside a bio-secure bubble during this England tour, he said, "Scheduling needs to be looked at in future, since playing in bubbles will be difficult, and everyone can't have the same mental capacity all the time."

"But I'm looking forward to the IPL for now."

England captain Jos Buttler said his team was disappointed to lose the series but learnt a lot during the tour.

"A fantastic game, both sides made some mistakes but played some brilliant cricket. We witnessed an incredible knock from Curran to nearly get us over the line, but congratulations to India on winning," he said.

"We've learnt a lot as a side and seen many guys stand up and take the lead. The white-ball leg was incredibly competitive. These are the conditions we will face in the near future in the (T20) World Cup.

"It's a great experience for the young guys to play a top-class side like India and they will be better cricketers for it."

He admitted that his bowlers didn't bowl that well at the top and gave away easy boundaries.

"But our bowlers dragged it back only to be pegged back by Pant and Hardik Pandya, but we restricted them well enough. We didn't have those big partnerships to take us over the line."