McGregor (22-6) fell to the canvas and never got up after a punch by Poirier (28-6), who will get the UFC's next lightweight title shot 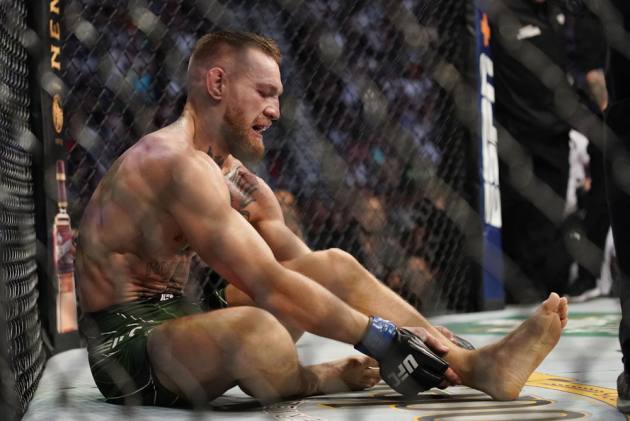 Conor McGregor sat and seethed with his back on the cage, a temporary cast around his left shin and foot. The biggest star in mixed martial arts was convinced he had just been robbed of revenge on Dustin Poirier by a broken leg. (More Sports News)

"This is not over! If we have to take this outside for him, we'll take it outside."

McGregor's animosity toward Poirier hasn't cooled, but this fight trilogy ended — for now, at least — with another victory for his more mild-mannered enemy.

Poirier beat McGregor for the second time in six months when McGregor was unable to continue after the first round at UFC 264 on Saturday night.

McGregor (22-6) fell to the canvas and never got up after a punch by Poirier (28-6), who will get the UFC's next lightweight title shot. McGregor's leg and ankle buckled when he stepped back from the blow, and Poirier finished the round raining blows down on the former two-division UFC champion.

"Just the thing had separated, and I bleedin' landed on the wonky leg like Anderson Silva that one time, something similar to that," McGregor said, referring to longtime middleweight champ Silva's infamously gruesome broken leg against Chris Weidman.

UFC President Dana White said he was told McGregor broke his shin near the ankle. McGregor will have surgery on Sunday morning.

Poirier said he thought McGregor's leg broke when he checked one of McGregor's kicks earlier in the fight. McGregor disagreed, saying there was "not one check."

"You never want to get a win that way, but what happened was the result of checking a kick," Poirier said.

"I'm more than sure of it. He got what he had coming to him. Karma is a mirror."

McGregor dropped to 1-3 in the cage since 2016, when he abdicated his UFC title reigns and accepted a wildly lucrative boxing match with Floyd Mayweather. McGregor has been unable to recapture his fearsome MMA form over the past half-decade — and despite his protestations, there was little in the first round at UFC 264 to suggest McGregor was back in elite form.

Poirier was largely in control of the opening round, parrying McGregor's kicks and landing several strikes before getting control over McGregor on the ground. After McGregor got up from a long stretch of punches and elbows, Poirier knocked him down one last time — and McGregor's ankle bent gruesomely as he fell.

"It (stinks), because I was going to beat the guy if his leg held up," Poirier said.

"I need to digest it all, because right now, it kind of feels weird. It's not a good feeling."

White confirmed Poirier will get the next shot at new lightweight champ Charles Oliveira. White also said he expects a fourth fight between McGregor and Poirier at some point after McGregor's leg heals.

"You can't have a fight finish that way. We'll see how this whole thing plays out. Who knows how long Conor is out? Poirier will do his thing until Conor is ready."

Poirier also said he intends to fight McGregor a fourth time — and it will be personal. McGregor returned to his verbose, mean-spirited promotional persona for this fight promotion, repeatedly insulting Poirier’s wife and vowing to kill Poirier.

"We are going to fight again, whether it's in the octagon or on the sidewalk," Poirier said.

"You don't say the stuff he said."

Poirier stopped McGregor in the second round when they met in Abu Dhabi last January, avenging his first-round knockout loss to McGregor in 2014.

Poirier's clear superiority in the fighters' second bout made a third showdown seem questionable just six months later, but McGregor demanded the chance to fix his mistakes and Poirier accepted the massive paycheck that comes from sharing a cage with McGregor.