Park Tae-Sang had worked a lot on Sindhu's defence and motion skills in the run-up to the Olympics and he said the hard work really paid off. 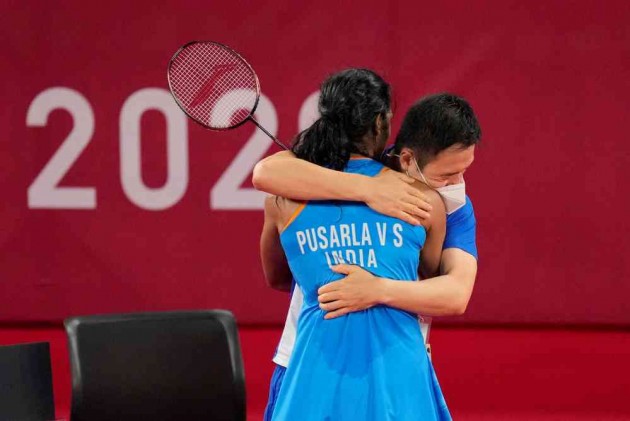 Sindhu, a 2016 Rio Olympics silver medallist, on Sunday beat world no.9 He Bing Jiao of China in the bronze play-off to become only the second Indian and the country's first woman to win two Olympic medals.

Park had worked a lot on Sindhu's defence and motion skills in the run-up to the Olympics and he said the hard work really paid off.

"For Sindhu defence has been a weakness, there is no problem with her attack. Every player, every coach knows that and today her defence was 200%. It was superb. In fact, the entire tournament, barring yesterday, she has been very good in defence," Park told PTI.

"We have been working every day on her net play and defence and I am happy it worked."

Sindhu, the reigning world champion, showed great mental fortitude to recover from her painful semifinal loss to world no. 1 Tai Tzu Ying and beat Bing Jiao in the third-place play-off.

Park said Sindhu was moved to tears following her loss to the Chinese Taipei shuttler in the semifinals.

"Actually Sindhu was very sad after yesterday's match, she was feeling very down and cried a little bit too," Park said.

"I told her she should not feel sad and we have to focus on the bronze medal and it turned out to be an amazing match. Amazing Sindhu did it for India."

Asked what was the strategy going into the match, Park said the idea was to be careful at the net.

"Today at the breakfast table, we were watching the other semifinal between Bing Jiao and Chen Yu Fei. We knew she smashes very well and her dribbles are also good so Sindhu will have to be careful of her net play," he said.

Park said the bronze medal won by Sindhu not only fulfilled the aspirations of India but also realised his own dream of claiming an Olympic medal.

"It is the first time that India badminton player has won two Olympic medals in badminton, so it is a great achievement not only for Sindhu but also a big moment for my teaching life," Park said.

"It is an important moment for my leadership career because as a player and coach I never won an Olympic medal. So it is a first for me too. I am very happy, can't express myself," the coach said.

The 42-year-old South Korean had claimed the Asian Games gold medal in 2002 during his international career as a player before turning to coaching in 2013.

He served as a national coach of the Korean badminton team for five years from 2013 to 2018 before being roped in for India's men's singles players but after the abrupt departure of women's coach Kim Ji Hyun, he took over the charge of training Sindhu in late 2019.

"I have been getting constant congratulatory messages and calls from my family, friends, my sister, all of them have been watching and supporting Sindhu."

With this medal, the 26-year-old Sindhu also became the fourth shuttler to win two consecutive medals in women's singles in Olympic history.