India had earlier lost 1-5 to world no.1 the Netherlands before slumping to a 0-2 defeat against Germany 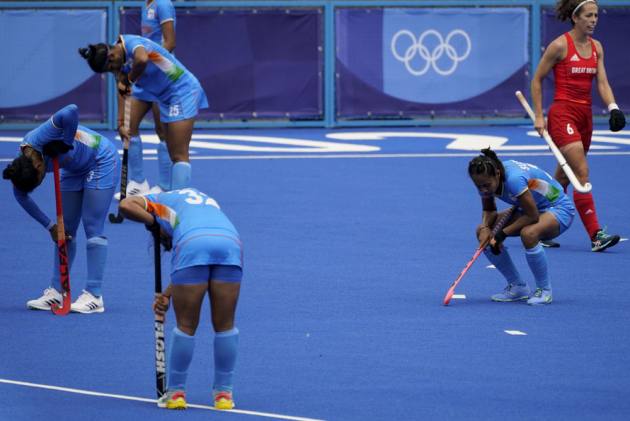 The Indian women's hockey team wasted chances galore to lose 1-4 against defending champions Great Britain in Tokyo on Wednesday, its third consecutive preliminary stage defeat which reduces the side's chances of qualifying for the quarterfinals.

The Indians were guilty of wasting opportunities in their first two games and the trend continued on Wednesday at the Oi Hockey Stadium as Great Britain punished them through strikes from Hannah Martin (2nd and 19th minute), Lily Owsley (41st minute) and Grace Balsdon (57th minute).

This Great Britain's second consecutive win in Pool A.

For India, Sharmila Devi scored the lone goal in the 23rd minute.

The Indians needed at least a point from this game to be safe but they now will have to win their remaining two matches to have any chance of qualifying for the knockout stage.

India had earlier lost 1-5 to world no.1 the Netherlands before slumping to a 0-2 defeat against Germany. Rani Rampal's side will next play Ireland on Friday.

Despite the score-line, it was a close match between world no.11 India and world no.5 Britain.

The difference between the two teams was that India had the better share of chances but Great Britain utilised more opportunities that came their way.

India secured as many as eight penalty corners in the match but converted just one. Great Britain too didn't have great success rate from set pieces as they found the net just once from the six they earned.

Great Britain started aggressively and put the Indian defence under pressure from the word go.

The title-holders didn't let the Indians settle down with a second minute goal by Martin, which caught the Indian defence off guard.

Great Britain kept up the pressure and had the first penalty corner in the 10th minute which was saved by India custodian Savita.

The Indians slowly settled down and penetrated the Great Britain circle on more than one occasion but, as has been the case, the forward-line lacked the finishing touch.

India earned their first real scoring chance in the 12th minute with back-to-back penalty corners but dragflicker Gurjit Kaur was not upto the mark.

The Indians were guilty of giving too much space to Great Britain inside their half and the defending champions capitalised on their opponents mistake four minutes into the second quarter when Martin scored her second goal with a reverse hit after Savita denied Sarah Jones with the initial try.

India too had their moments in the match and from their third penalty corner, Sharmila to pulled one back for her side.

Sharmila nicely deflected in Gurjit's flick as India executed a great routine to reduce the gap.

The goal pumped up the Indians as they mounted attacks in numbers thereafter and managed to secure another penalty corner minutes later but wasted the chance.

Seconds from half time, Sharmila was denied by Great Britain goalkeeper Madeleine Hinch as India went into the breather trailing 1-3.

The Indians came out attacking in the third quarter and enjoyed the better share of possession. They earned three more penalty corners in succession just a minute after resumption but wasted all.

A minute later, Great Britain got a penalty corner but Savita came to India's rescue.

India got another set piece in the third quarter but the result was same.

It was a contentious goal as India asked for referral citing a dangerous ball, which seemed to be the case in TV replays, but the TV umpire didn't find any justification to change the decision.

The third goal broke India's momentum as Great Britain enjoyed the lion's share of possession in the final quarter and in the process secured two more penalty corners, the second of which resulted in a stroke and Balsdon made no mistake in drawing the final nail in India's coffin.