By virtue of this win, India have consolidated their position in the second spot of Pool A with three wins and one loss out of four games, behind Australia 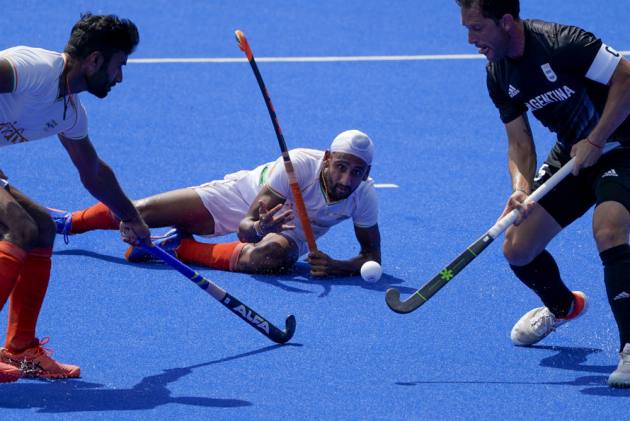 The Indian men's hockey team stormed into the quarterfinals of the Olympic Games with a comprehensive 3-1 victory over defending champions Argentina, scoring two goals in the final two minutes of its penultimate pool match in Tokyo on Thursday.

After goal-less first two quarters, India broke the deadlock in the 43rd minute through Varun Kumar before Vivek Sagar Prasad (58th) and Harmanpreet Singh (59th) struck in the closing minutes of the match to seal the contest.

It was India's third win in Pool A at the Oi Hockey Stadium.

Argentina's lone goal came from a penalty corner conversion by Schuth Casella in the 48th minute.

By virtue of this win, India have consolidated their position in the second spot of Pool A with three wins and one loss out of four games, behind Australia.

Argentina are struggling at the fifth spot in the six-team pool and need to beat New Zealand in their final preliminary match on Friday to stay in the hunt for a quarterfinal berth.

The top-four make the last-eight stage from each group.

India will take on Japan in their final pool match on Friday.

The Indians were aggressive and put pressure on the Argentine defence from the very beginning, attacking in numbers.

India completely dominated the first quarter, mounting attacks after attacks but the Argentines defended stoutly to frustrate their opponents.

The Indians nonetheless dominated possession and penetrated the Argentine circle on numerous occasions but the final pass was missing.

Manpreet Singh's men had their first shot at the goal in the third minute.

But Dilpreet Singh's hit from close range from a Simranjeet Singh pass was nicely saved by Argentina goalkeeper Juan Vivaldi.

The midfield, led by Manpreet, played a great game in the first half which was evident from the circle penetration statistics. India had 16 against Argentina's two.

India were almost rewarded in the 27th minute when a diving Simranjeet's effort sailed over.

Two minutes later, Argentina had the first real scoring opportunity but Nahuel Salis' powerful shot from right corner of the circle was padded away by P R Sreejesh's outstretched hands.

It was a frustrating first half as both the teams failed to secure a single penalty corner to head into the breather goal-less.

The script was similar in the third quarter as India continued to waste chances.

Soon the Indians had their hearts in their mouth when the defence was caught off guard by Argentina but Matias Rey couldn't beat Sreejesh from a one-on-one situation.

It took India 43 minutes to break the deadlock through Varun who scored from the team's third penalty corner.

It was even in the 48th minute when Casella scored Argentina's first penalty corner.

Argentina had two more chances -- one from a field effort from Lucas Villa which was saved by Sreejesh and another from a penalty corner which the Indians defended stoutly.

India chief coach Graham Reid lauded his players for their performances but said it definitely wasn't easy against Argentina despite the scoreline suggesting otherwise.

"Good performance today. This is what Argentina can do, they sit back in the game, and then all of a sudden they score a corner. You know these things can happen when you play a team like Argentina," he said about the goal conceded by his team.

Two minutes from the hooter, Vivek restored India's lead tapping in from a rebound after Dilpreet's attempt was saved by Vivaldi. Then, in the nick of time Harmanpreet drew the final nail in Argentina's coffin by converting India's eighth penalty corner.

Reid reminded his players about the missed opportunities but was happy that they adopted a patient approach and stuck to their game plan.

"We again put our opportunities away, we created enough. But what was good is that we didn't let that frustrates us, we stayed patient and stuck with the game plan. I'm very happy, it can be a bit stressful too for me," the Australian said.