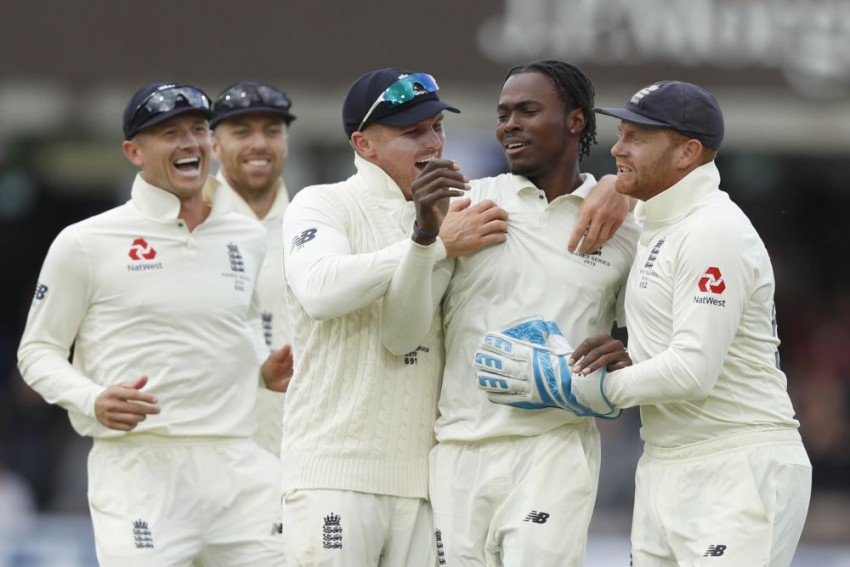 Jofra Archer, second right, celebrates with teammates the wicket of David Warner during the fifth day of the second Ashes Test between England and Australia at Lord's on Sunday.
AP
Omnisport August 19, 2019 00:00 IST The Ashes 2019: Australia Survive Jofra Archer Onslaught For Lord's Draw 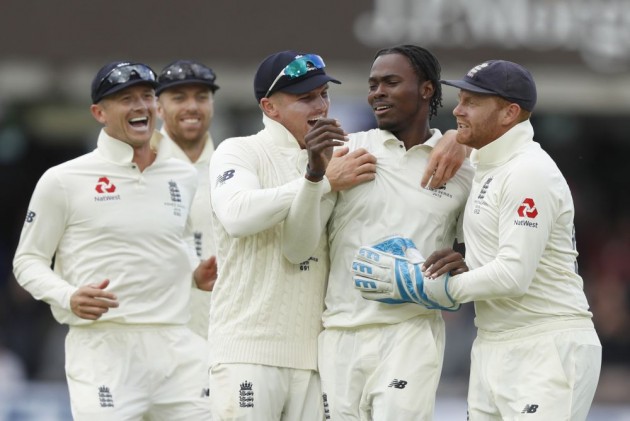 Australia overcame Steve Smith's absence and survived another venomous spell from Jofra Archer to draw the second Test with England and retain their slender advantage in the Ashes. (HIGHLIGHTS | SCORECARD)

An intriguing, rain-affected encounter at Lord's concluded with neither side able to forge a positive result, despite England bidding to force the issue when declaring on 258-5 in the second session after Ben Stokes (115 not out) had posted a century. (CRICKET NEWS)

Joe Root's attack had enough incentive with 48 overs remaining, while a target of 267 was also encouraging for the tourists, even if Smith was unavailable having displayed concussion symptoms on Sunday after copping an Archer bouncer on the third day.

Rain prevented play from starting for 70 minutes before Stokes and Jos Buttler (31) continued their fifth-wicket stand in the first session to increase England's lead to 165.

Buttler top-edged Pat Cummins (3-35) to Josh Hazlewood at long leg after lunch before Stokes, then on 55, survived a review following an lbw appeal from Nathan Lyon.

Alongside Jonny Bairstow (30 not out), Stokes pushed on, dispatching Lyon over the ropes from successive deliveries as the advantage increased past 200.

A single to square leg gave Stokes his seventh Test century and Root called his batsmen in at the end of the following over to give Archer and his bowling colleagues an opportunity to level the series.

Archer provided early optimism when he snared Warner (5), who prodded to Rory Burns at gully to continue his dreadful Ashes, and then drew the edge of Khawaja (2), bringing Labuschagne, the first concussion substitute in Test history, to the crease.

There was no gentle introduction to Archer's searing speed as Labuschagne was caught flush on the helmet grille from his second delivery, a 91.6mph rocket that knocked him off his feet before he bolted back up.

Cameron Bancroft (16) was trapped in front by Leach but Labuschagne and Travis Head put on 85, with second slip Jason Roy shelling a chance to remove the latter when the alliance was worth 49.

Labuschagne (59) eventually fell in controversial circumstances, Root diving forward at midwicket to take a catch and benefitting from a soft signal of out when replays proved inconclusive.

As he walked off, the batsman expressed his disapproval to England's captain, whose team were soon celebrating again when Matthew Wade picked out short leg from Leach's next ball.

That gave the spinner three wickets - and Archer matched that total when Denly produced a fantastic one-handed catch to remove Tim Paine - but Head (42 not out) and Cummins (1 not out) ensured Australia held on.

The home of cricket is quickly becoming Stokes' stage to shine.

At the venue where his heroics helped secure the Cricket World Cup last month, England's all-rounder made the only century of the contest, digging deep during a tricky spell on Saturday before opening up to give his side a chance, albeit slim, of victory on the final day.

MARVELLOUS MARNUS STANDS UP TO ARCHER

Having seen his team's talisman taken down by one vicious delivery, Smith's replacement Labuschagne was given a baptism of fire, only coming in to bat for the second innings and facing a fired-up Archer straight away.

He came back from being floored by a shorter ball himself to produce a crucial knock – one that helped to ensure Australia remain in front. Labuschagne may be needed at Headingley if Smith cannot return, and here he showed he is up for the fight