The Ashes 2019: Australia Seven Wickets From Retaining The Urn As Joe Root Digs In

England openers Rory Burns and Jason Roy were out cheaply, but Joe Root and Joe Denly stuck around as Australia sought a speedy Ashes victory. 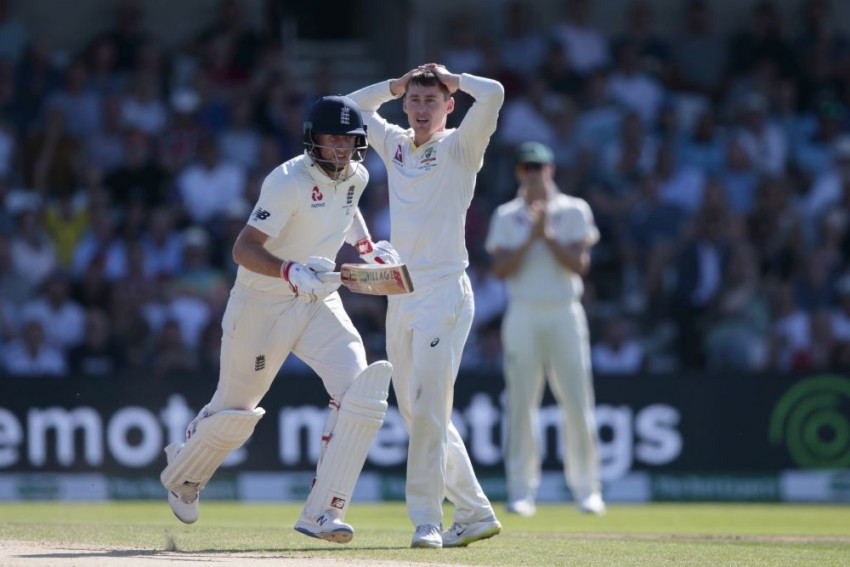 Joe Root, left, in action during the third Ashes Test between England and Australia at Headingley, Leeds on Saturday (August 24).
AP
Agencies August 24, 2019 00:00 IST The Ashes 2019: Australia Seven Wickets From Retaining The Urn As Joe Root Digs In

Chasing a target of 359 - which would be the highest successful Test chase for England - the hosts went some way to making amends for their first-innings debacle by ending the day at 156/3. (CRICKET NEWS)

Root, whose role as captain will be questioned should Australia emerge victorious, was unbeaten on 75.

Denly, England's top scorer in their paltry 67 first time around with 12, survived three wafts outside off stump and being struck flush on the helmet by a Pat Cummins bouncer to score 50. The duo stitched together a 126-run stand before Denly was removed by Josh Hazlewood.

Left-hander Burns edged a lifting Pat Cummins delivery to David Warner at first slip before Roy, yet to convince as a Test match opener, played down the wrong line to Hazlewood, who took 5/30 in the first innings, and was bowled.

Earlier, Marnus Labuschagne missed out on a maiden Test hundred as he top-scored with 80 in Australia's second-innings 246.

It was his third successive fifty since becoming world cricket's inaugural concussion substitute in place of star batsman Steve Smith during the drawn second Test at Lord's.

Australia resumed on 171/6 with Labuschagne 53 not out after making 74 -- seven more than England managed between them -- in the first innings.

Labuschagne drove Stuart Broad for a textbook four through extra cover to go to 60 only to be dropped next ball when diving wicketkeeper Jonny Bairstow floored a one-handed chance heading towards Root at first slip -- the third time Labuschagne was reprieved in his innings.

Labuschagne had moved on to 70 when, as happened with his second ball at Lord's, he was hit on the helmet grille by a Jofra Archer bouncer.

But after being examined by the Australia team doctor, Labuschagne uppercut an 88 mph (141 kph) Archer bouncer for four.

Labuschagne was 74 not out when Cummins's dismissal left Australia 226/8.

But rather than being denied a century in his seventh Test by a lack of partners, the South Africa-born batsman ran himself out.

Labuschagne ignored the old rule of 'never run on a misfield' when Denly fumbled at third man and then failed to beat a throw to Bairstow as his valuable 187-ball innings featuring eight fours came to an end.