Punjab first dismissed Karnataka for meagre 87 and then overhauled the target in 12.4 overs in what turned out to be a lopsided contest 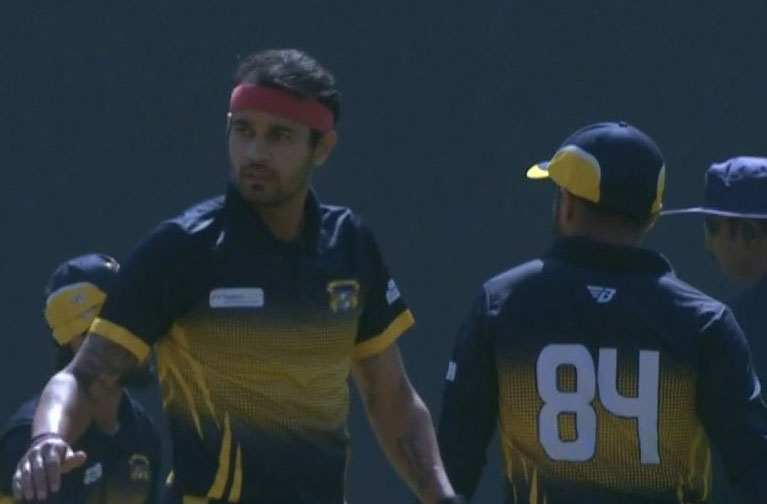 Punjab knocked defending champions Karnataka out from the Syed Mushtaq Ali Trophy with their bowlers setting up a comfortable nine-wicket win in the first quarter-final, in Ahmedabad on Tuesday. (More Cricket News)

Punjab first dismissed Karnataka for meagre 87 and then overhauled the target in 12.4 overs in what turned out to be a lopsided contest at the Sardar Patel stadium.

Pacers Siddharth Kaul (3/15) and Sandeep Sharma (2/17) ran through the Karnataka top-order after they were sent in to bat.

Karnataka was reeling at 26 for three, after openers Karun Nair (12) and Devdutt Padikkal (11) fell cheaply.

Pavan Deshpande (0) was dismissed off his second ball, as Mayank Markande took a diving catch.

Kaul dismissed both Padikkal and Deshpande in the fourth over.

It soon became 26 for four, as young left-arm pacer Arshdeep Singh (2/16) dismissed B R Sharath (2), who was caught in the slip cordon.

All-rounder Shreyas Gopal (13), who has often come to Karnataka's rescue too could not convert his start as he edged to wicket-keeper Prabhsimran Singh off pacer Ramandeep Singh (2/22) as Karnataka lost its half side for 51.

Ramandeep got his second wicket when he sent back J Suchith (8) to leave Karnataka at 72 for six.

Leggie Mayank Markande (1/12) then got into the act as he cleaned up a well-set Anirudh Joshi (27). Punjab continued their dominance over their opposition and ran through their lower order.

In reply, Punjab lost opener Abhishek Sharma (4) early but Prabhsimran Singh (49 not out off 37 balls) and Mandeep Singh (35 not out) ensured that the chase was walk in the park with their 85-run unbeaten stand for the second wicket.

Prabhsimran, who took on the listless Karnataka attack, fittingly finished the game with a six.

In the evening game, put into bat, Tamil Nadu first restricted Himachal Pradesh to 135/9 and then rode on Baba Aparajith’s unbeaten 52 to overhaul the target in 17.5 overs.

Tamil Nadu kept on taking wickets at regular intervals as they did not allow opposition batsmen to settle down.

While chasing, Tamil Nadu lost openers Narayan Jagadeesan (7), C Hari Nishanth (17) and Arun Karthik (0) early and were 25 for 3 at one stage.

Tamil Nadu were in a spot of bother when they slipped to 66 for 5 but Aparajith, who struck three fours and two sixes, and Shahrukh Khan (40 not out off 19 balls; 5x4, 2x6) conjured an unbeaten 75-run match-winning sixth wicket stand to take the side home.