Inter extended their lead at the Serie A summit to 10 points but could only draw 1-1 with Spezia after coming from behind on Wednesday. 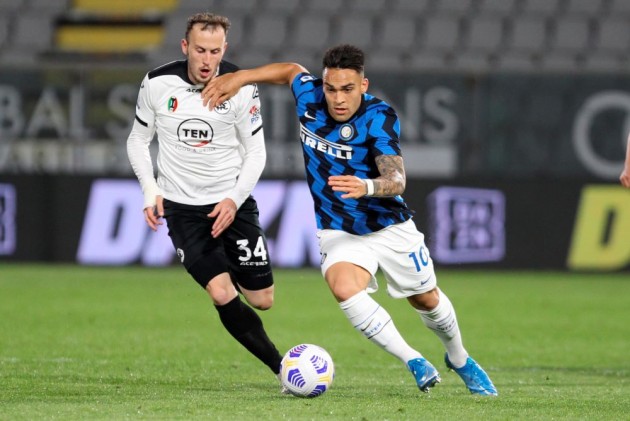 Inter extended their lead at the Serie A summit to 10 points but could only draw 1-1 with Spezia following another Samir Handanovic error on Wednesday. (More Football News)

In their first match since joining and withdrawing from the much-criticised European Super League project, league leaders Inter failed to fully capitalise on second-place Milan's 2-1 loss to Sassuolo earlier in the day.

After scoring an own goal in the 1-1 draw that ended Inter's 11-game winning run in Serie A at Napoli on Sunday, some more shoddy goalkeeping from Handanovic enabled Diego Farias to put Spezia in front early on at Stadio Alberto Picco.

Ivan Perisic bundled in the equaliser on his 200th appearance in all competitions for Inter, who saw Romelu Lukaku and Lautaro Martinez each denied by the offside flag late on as they failed to find the winner that would have boosted their Scudetto hopes further.

Spezia were without their top scorer M'Bala Nzola but managed to take a surprise lead in the 12th minute when Farias' effort from just outside the box squirmed past Handanovic.

Inter's final pass was often lacking but after Nicolo Barella sliced their best opportunity wide, Achraf Hakimi teed up fellow wing-back Perisic for the equaliser ahead of half-time.

The Nerazzurri were buoyed by the goal and Martinez saw his shot come back off the post before being gathered by Spezia goalkeeper Ivan Provedel.

A woeful back pass from Ardijan Ismajli gifted Lukaku a chance to put Inter in front after the hour mark but he was unable to round Provedel cleanly and the keeper recovered well to block his second attempt.

Lukaku and Martinez were frustrated by offside decisions, but it looked like the winner was finally about to arrive when the pair combined in stoppage time. However, the Argentina international lashed his effort straight at Provedel.

What does it mean? Inter go 16 unbeaten

It was hardly a performance befitting one of the 12 best teams in Europe but Inter ultimately edged slightly further ahead in the Scudetto race.

Although reigning champions Juventus managed to move two points closer to Antonio Conte's side by beating Parma 3-1, with the undefeated run the Nerazzurri are on it would take an incredible collapse for them to lose the title from here.

He may have failed to take the chances that came his way, but Lukaku was still a key player for Inter. He created five chances for team-mates so he did plenty to help his team win despite misfiring in the box.

For just the second time in his Inter career, Handanovic has made an error leading to a goal or put through his own net in consecutive Serie A games – the previous time being when his mistakes led to Juventus and Genoa scoring in May 2015. However, he made two errors leading to goals in a single league meeting with Fiorentina in September of that year.

- Inter have drawn the joint-most away games in Serie A this season (six, level with Juventus, Udinese and Parma).
- Spezia must just one shot in the entire game. Prior to this, the last side to avoid defeat despite having only one shot in a Serie A match was Chievo, against Cagliari in January 2014.
- Perisic has scored three of his past five Serie A goals when Inter have been trailing in games.

Inter entertain Hellas Verona at San Siro on Sunday, while Spezia are at fellow strugglers Genoa one day prior.