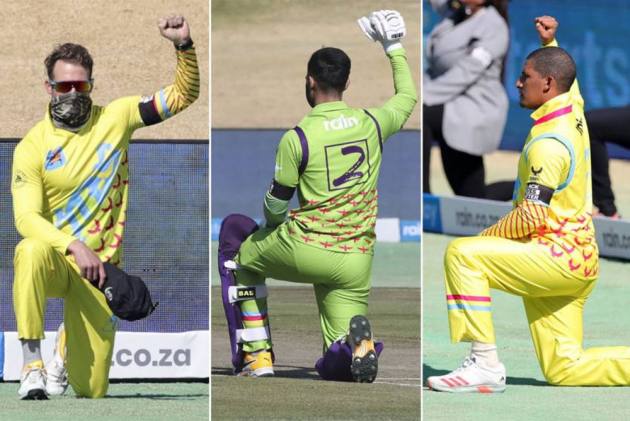 South African players won't take the knee in their limited over series against England at home as they have already expressed their support towards the Black Lives Matter movement during the 3TC game in July, coach Mark Boucher has said. (More Cricket News)

South Africa will appear in their first international assignment since the COVID-19-induced lockdown in March when they host England for three T20Is and as many ODIs, beginning on November 27 at Newlands.

South African players, match officials, administrators and commentators, including director of cricket Graeme Smith, had taken the knee while wearing black arm-bands with the BLM logo on it at the '3TCricket' match in Centurion for the Solidarity Cup on July 12.

"I have spoken to the guy (Lungi Ngidi) who was driving the whole movement within our set-up, he is pretty happy that we have done what we needed to do, in particular at that (3TC) game," Mark Boucher was quoted as saying by ESPNcricinfo.

"It's not something that we have to continue to show. It's something that you have to live... If guys who brought it up are happy with it, that's great, but if they feel we have to do more, that will be a chat and that they are open to express their opinions."

Fast bowler Ngidi had lead South Africa's response to the BLM movement, saying that racism issue is "something that we need to take very seriously and like the rest of the world is doing, make the stand."

However, he received flak for his comments with former international cricketers Pat Symcox and Boeta Dippenaar saying that Ngidi should also speak up against attacks on white farmers in South Africa.

"Our new value system is about respect, empathy and belonging and all of those lead to an environment where guys feel free to talk about these hard issues. They've got the support and respect and empathy from every other player," said Boucher.

South Africa president Cyril Ramaphosa had declared November 25-29 as national days of mourning for the lives lost to COVID-19 pandemic and gender-based violence.

Boucher said the team may wear black arm bands to support the issues in line with the president's call.

"There are a couple of other issues that our president has raised going forward with regards to gender-based violence and the victims of Covid19.

"We are going to be addressing this with the team so if there is a black armband to wear, we will probably be wearing it because of the president's call."