With Cyclone Amphan leaving a trail of destruction in its path, Sourav Ganguly was forced to play a salvaging act at his own balcony. And it reminded fans of what he did at Lord's 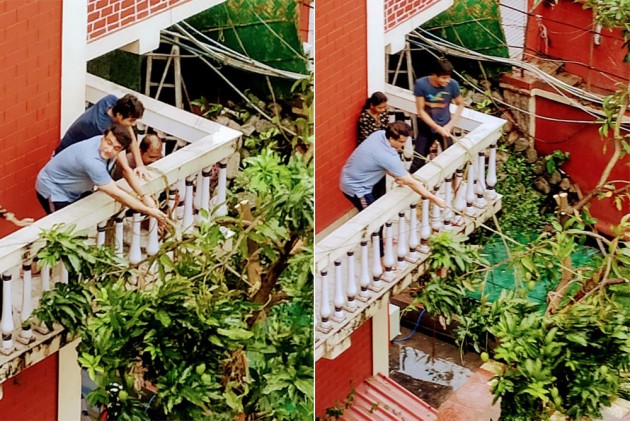 There's something about Sourav Ganguly and balconies. Remember what the 'Prince of Calcutta' did on Lord's balcony in 2002. Well, fans were treated with another balcony show on Friday, albeit in a different situation. (More Cricket News)

With Cyclone Amphan leaving a trail of destruction in its path, Ganguly was forced to play a salvaging act at his own balcony. And it reminded fans of what he did at Lord's.

"The mango tree in the house had to be lifted, pulled back and fixed again .. strength at its highest Face with tears of joy," the BCCI boss wrote.

The mango tree in the house had to be lifted, pulled back and fixed again .. strength at its highest ðÂÂÂÂÂÂÂÂÂÂÂÂðÂÂÂÂÂÂÂÂÂÂÂÂ pic.twitter.com/RGOJeaqFx1

The post became an instant social media hit, with thousands of 'likes' and heartwarming comments accentuating the 'fixing' act.

Ganguly had led India to many memorable wins, but fans are equally appreciative of the fact that one of the most celebrated Indians is taking care of a fallen tree.

For the uninitiated, after India's thrilling win in the final of 2002 Natwest final against England, Ganguly gave one of the most unforgettable celebrations by waving his shirt over on the Lord's balcony.

Ganguly, whose tenure as the president of the Indian cricket board in July, may soon find himself ruling the world cricket as the chairman of the International Cricket Council (ICC).

The 47-year-old from Behala in Kolkata has emerged as the dark horse to succeed compatriot Shashank Manohar as the ICC chairman.

Former cricketers, David Gower of England and Graeme Smith of South Africa, have already endorsed Ganguly as a worthy candidate for the position.