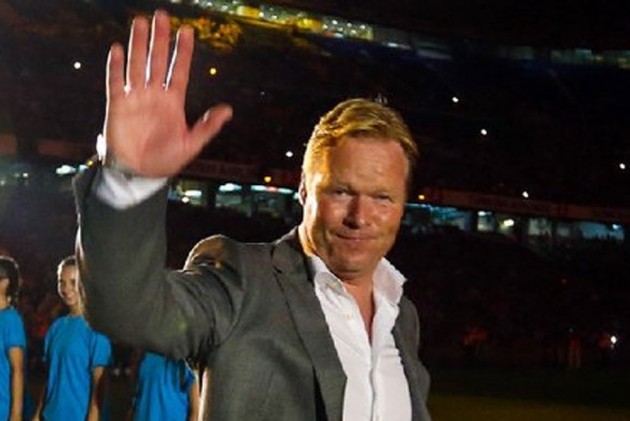 The Dutchman leaves his role as head coach of the Netherlands, having agreed a two-year deal at Camp Nou.

Setien's sacking was confirmed after just seven months in charge, as he paid the price for Barca's failure to win La Liga and their 8-2 Champions League humiliation at the hands of Bayern Munich.

That quarter-final defeat last Friday was Barca's worst since 1946 and others could yet follow Setien out of the door.

First-team technical secretary Eric Abidal has also left after his position came under severe scrutiny, while president Josep Maria Bartomeu confirmed the club's elections have been brought forward to March but has resisted calls to step down. The incumbent will not be able to stand for presidency again.

Before Koeman was confirmed, Barca announced the appointment of Ramon Planes to replace Abidal.

Changes are coming for Barca and the arrival of Koeman, who spent six years with the club as a player until 1995 and was also Louis van Gaal's assistant from 1998 to 2000, is chief among them.

Koeman had been working as head coach of his whom nation, having taken charge following Dick Advocaat's failure to qualify for the 2018 World Cup.

His impact with the Oranje was swift, leading them to the Nations League final last year and winning six of eight Euro 2020 qualifiers – their solitary defeat coming to Germany in March 2019 – en route to securing a place at the finals.

Koeman was approached by Barca when Ernesto Valverde was sacked in January but turned them down, citing his commitment to leading the Netherlands through Euro 2020. However, the tournament was postponed by a year due to coronavirus and Koeman's personal circumstances shifted when he was hospitalised for heart surgery in May.

Barca will now hope Koeman can elicit a similar response at Camp Nou as he did with his national team, but he is facing an uphill battle.

Captain and talisman Lionel Messi has reportedly told the club he wants to leave as soon as possible, while Gerard Pique has called for wholesale changes and even offered to move on for the benefit of the team.

Barca will also be without Marc-Andre ter Stegen until November after the goalkeeper had knee surgery, and the impact of the COVID-19 crisis is likely to make significant spending in the transfer market difficult.

Koeman will not have long to implement any changes, either. The 2020-21 La Liga season is due to begin in a little under a month's time.

It is widely thought Koeman is seen as a stop-gap until the club can convince former midfielder Xavi – now coach of Al Sadd – to return, having so far been unsuccessful in their attempts to bring him back. Presidential candidate Victor Font has named the ex-Spain star as a top target should he win the election.

Mauricio Pochettino had also been mentioned as a possible option and was apparently favoured by Bartomeu, but media reports claim the board refused to sanction his appointment due to his connections to local rivals Espanyol and disparaging comments he had previously made regarding the Blaugrana.