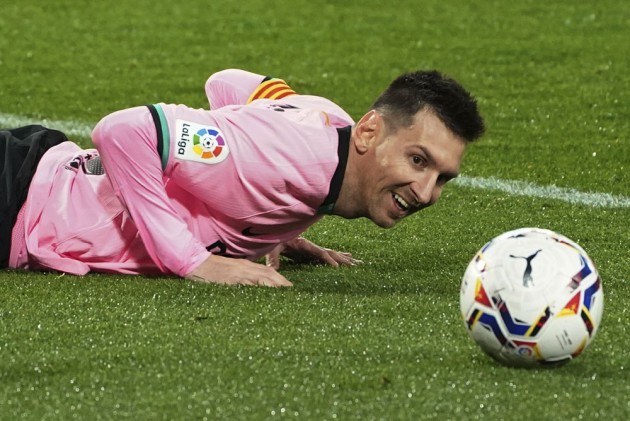 Sergino Dest scored his first goals for Barcelona on a landmark outing for Lionel Messi as the Catalans thrashed Real Sociedad 6-1 to move back to within four points of LaLiga leaders Atletico Madrid. (More Football News)

The United States international netted in each half after Antoine Griezmann had broken the deadlock against his former club on Sunday.

Messi marked a club-record 768th appearance in all competitions with Barca's fourth and sixth goals either side of a superb fifth from Ousmane Dembele, capping a resounding victory for Ronald Koeman's men on the road, with Ander Barrenetxea grabbing the hosts' consolation.

Barca's most impressive league win of the season lifted them back into second place behind Atleti, who earlier beat Deportivo Alaves, and means they head into the international break on an eight-game unbeaten run in all competitions.

3 - @FCBarcelona's Sergiño Dest  is the third American player to score in @LaLigaEN history, after Jozy Altidore in 2008 (1) and Yunus Musah in 2020 (1), and the first to score a brace. Jazz. pic.twitter.com/aMcsw1xEIt

La Real posed an early threat on the break, Marc-Andre ter Stegen making a solid block to deny Alexander Isak, but they fell behind 37 minutes in courtesy of their former star.

Dembele should have buried Jordi Alba's cross but, after Alex Remiro's save, Griezmann pounced to blast the ball home.

Barca doubled their lead two minutes before half-time, Dest producing a confident low finish after a clever turn and slide-rule pass from Messi, all after Ter Stegen had produced another fine stop following a loose goal kick.

Any hope of a Sociedad comeback was lost seven minutes into the second half, Alba surging into the box and crossing for Dest to prod in a surprise second goal.

There was less of a shock about the scorer of Barca's fourth, Messi lifting a composed finish over Remiro following a fine ball over the top from Sergio Busquets.

Dembele had a goal disallowed for a marginal offside but was not to be denied a second time, the France winger waltzing his way into the penalty area before drilling a low finish past Remiro.

The home side did at least get off the mark, substitute Barrenetxea powering an unstoppable effort beyond Ter Stegen from the edge of the box, but Messi completed the rout with a neat near-post finish after a fine move involving Alba and Riqui Puig.

What does it mean? LaLiga pauses as title race heats up

Barca have now won nine consecutive away games in LaLiga, the third best such streak in their history, while they are unbeaten in 10 league meetings with La Real.

More importantly, they have gone back into second in the table, two points above Real Madrid and four behind Atletico with 10 games remaining.

Messi makes his mark on another momentous day

Dest may have been the unlikely goalscoring hero but Messi was again integral on the occasion of another career milestone.

His pass for the full-back's first goal was superb and his own finishes equally composed as he reached 23 in LaLiga for the season.

Sociedad had responded quite well to losing 4-0 at home to Manchester United a month ago, beating Alaves and Levante and drawing away against Real Madrid and the Red Devils, conceding just once in that run.

However, back-to-back league losses to Granada and Barca may well have put paid to their top-four ambitions and they will need to recharge during the break ahead of their Copa del Rey final.

Barca return from the international break at home to Real Valladolid on April 5. Sociedad, meanwhile, will now prepare for the rearranged 2020 Copa del Rey final with Athletic Bilbao.