Manchester United took a big step to the last 16 of the Europa League after an impressive victory over Real Sociedad in Turin. 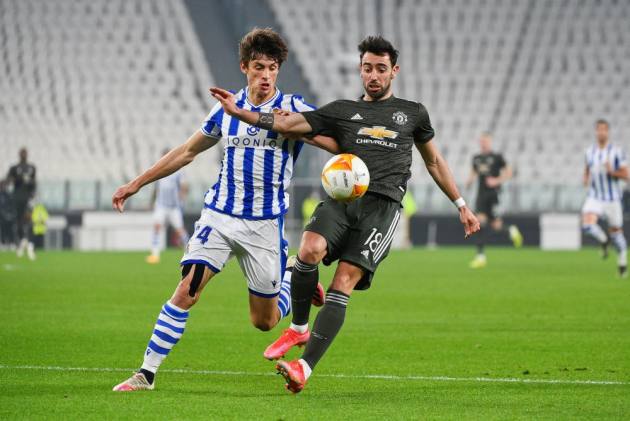 Fernandes took his tally to 33 goals in all competitions for the Red Devils to put Ole Gunnar Solskjaer's men in charge inside the first hour.

The LaLiga side had posed a threat at the Allianz Stadium in Turin, where the match was being held due to coronavirus travel restrictions, but Marcus Rashford and Daniel James struck before Amad Diallo was granted his debut late on, meaning United go into next week's return leg in a commanding position.

Former United man Adnan Januzaj curled a shot just wide of the right-hand post and Dean Henderson had to save smartly from Alexander Isak, those chances coming either side of a wasted Rashford opportunity in a thrilling opening three minutes.

Scott McTominay, who had scored three goals in United's previous four games, was denied another by the leg of Alex Remiro after driving into the box from Fernandes' pass.

Rashford then missed another glorious opportunity, firing straight at Remiro after Alex Telles' throughball to Fernandes split the Sociedad defence.

However, he turned provider in the 26th minute. This time, Remiro made a mess of things coming off his line to clear Rashford's pass and clattered into his defenders, giving Fernandes a simple finish.

La Real applied some pressure early in the second half but United doubled their lead on the break. Fernandes let Rashford's pass run to Daniel James and then swept a first-time finish past Remiro, with VAR overturning an initial offside call.

Januzaj continued to threaten against his old club, beating Fernandes and playing in a dangerous cross that Nemanja Matic cleared, but Rashford made no mistake with the third of his chances to kill off the game, slotting past Remiro after Fred's pass cut through the defence.

James had a goal disallowed for a marginal offside and fired another effort straight at Remiro, but he made no mistake with his next chance, charging into the box and squeezing a shot through the keeper's legs.

7 - Marcus Rashford has scored seven goals in European competition this season for Manchester United - excluding qualifiers, this is the most by an Englishman in a season for the Red Devils since Bobby Charlton scored eight in the 1964-65 Fairs Cup. Devil. pic.twitter.com/I3ZiWa7Gyx

What does it mean? United end Spanish hoodoo to take charge of tie

United had gone nine games without a win against Spanish sides in Europe stretching back to a 1-0 semi-final first-leg victory over Celta Vigo en route to winning this trophy in 2016-17.

This was a welcome result against a strong side that saw United find something of their attacking groove again and take control of the last-32 tie.

They have been inconsistent at home this season, but they will be firm favourites to progress next week at Old Trafford.

Fernandes has been involved in 52 goals in 58 games for United in all competitions, which is at least 10 more than any other Premier League player has managed since his debut last February.

Imanol Alguacil's set-up afforded him lots of space to exploit but, unlike some of his team-mates, Fernandes almost always applies a clinical touch.

United can still sharpen up in attack

This proved a comfortable win but, in truth, United should have had many more. Rashford missed two sitters in the first half, James spurned an easier chance than the one he converted, and Mason Greenwood dragged a good opening wide.

Should they progress to the latter stages, they will want to avoid a repeat of last year's semi-final exit when Sevilla punished their lack of ruthlessness. This was an encouraging step towards correcting that problem.

4 - Manchester United recorded the biggest away victory by an English side against a Spanish opponent in the UEFA Cup/Europa League, surpassing Newcastle United’s 3-0 win at Mallorca back in March 2004. Cruise. pic.twitter.com/g2pqoOxoyR

- This was the biggest away victory by an English side against a Spanish opponent in the UEFA Cup/Europa League, surpassing Newcastle United's 3-0 win at Mallorca back in March 2004 (in the last 16).
- Real Sociedad have only won one of their four home games in the Europa League this season (D1 L2), despite attempting 49 more shots than their opponents across these four games (77 shots for, 28 shots faced).
- Marcus Rashford has scored seven goals in European competition this season for United. Excluding qualifiers, this is the most by an Englishman in a season for the Red Devils since Bobby Charlton scored eight in the 1964-65 Fairs Cup.
- Bruno Fernandes has scored nine goals in all European competitions for Manchester United; since his European debut for the club in February 2020, only Inter's Romelu Lukaku (11) has netted more across all players in the Europa League/Champions League.
- Since his Europa League debut in February 2018, Fernandes has been involved in more goals in the competition than any other player (24 - 16 goals, eight assists).
- Dan James scored his fourth goal of the season for United (12th appearance), equalling his goal tally across all competitions for the club last term – four goals in 46 games.

Before next Thursday's second leg at Old Trafford, United are at home to Newcastle United in the Premier League on Sunday, with Sociedad hosting Deportivo Alaves in LaLiga.