Karim Benzema and Marco Asensio did the damage as Real Madrid fended off a gutsy Alaves side to move a step closer to another league title. 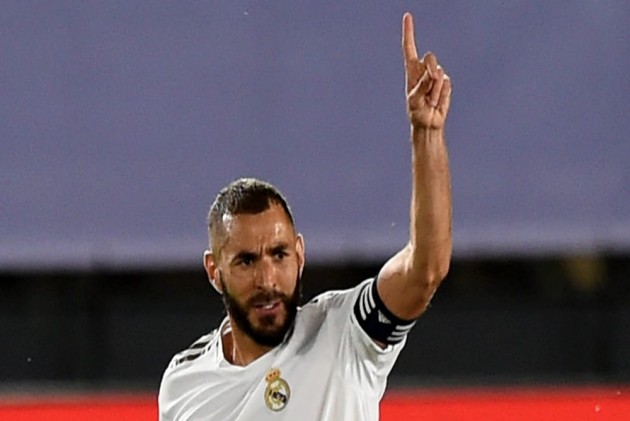 Real Madrid moved a significant step nearer to a 34th LaLiga title as Karim Benzema set them on the way to a 2-0 win over Deportivo Alaves.

The gap to Barcelona in second place is back to four points, and it would take a mighty collapse from this position for the teams to swap positions.

Marco Asensio grabbed Madrid's second goal after Benzema's early penalty, and Zinedine Zidane's side could have stretched their lead as a string of chances came their way.

But lowly Alaves contributed plenty to an entertaining game, enough to suggest they can survive in the top flight under their new coach Juan Muniz.

Madrid edged ahead with an 11th-minute spot-kick from Benzema after Ferland Mendy – starting in place of the injured Marcelo – was brought down by Alaves right-back Ximo Navarro.

Madrid had by that stage survived a scare when Joselu headed against the crossbar from just five yards and Lucas Perez's follow-up was booted off the line by Raphael Varane.

Joselu squandered another chance when he shot wide for Alaves, who have now lost six straight games to put their place among the elite in unexpected peril.

The visitors to the Estadio Alfredo Di Stefano, being led by Muniz for the first time, continued to ask questions of Madrid's backline.

But the jig was up for them early in the second half, with Benzema fed by Rodrygo before slipping in Asensio to score from close range. To the naked eye, Benzema appeared offside, but VAR replays favoured Zidane's team.

Benzema and Rodrygo saw shots pushed away by Roberto Jimenez as Madrid went in for the kill.

It hardly mattered that they failed to add to their haul, the pressure now overwhelming for Barcelona as they head to Real Valladolid on Saturday.

What does it mean? Madrid edge closer

Barcelona are waiting for a Madrid stumble that does not look like coming. Los Blancos rode their luck in this game, especially in the first half when the clearest chances were created by Alaves, but it is eight wins from eight since the restart for Madrid, and a four-point cushion with three rounds remaining is massive. Alaves could do with halting their slide sooner rather than later, given their last game of the season is against Barcelona.

Not only did Madrid's number nine take over penalty duties from Ramos, he also took on the captaincy and performed like a true talisman. He finished the game in the stands, seemingly nursing an injury that may make him a doubt for upcoming fixtures.

3 - @realmadriden have scored three penalty goals in three games in a row in #LaLiga for first time since April-May 2006. Curious. pic.twitter.com/IaEY9WxcmE

Reasons to be cheerful for Muniz

Alaves are worryingly close to the drop zone, but this was always unlikely to be the game where they turned the corner results-wise. Six straight defeats is an awful run at any stage of the season, but it could be calamitous now should it be extended any further. However, for much of the first half here they were the more dangerous attacking unit, with Oliver Burke and Joselu especially threatening, and they should survive if this bold performance was not a one-off to mark the arrival of Muniz.

Madrid are back in action when they face Granada on Monday. That could be the game in which they win the title, should Barcelona slip up against Real Valladolid on Saturday. Alaves face Getafe next, also on Monday.