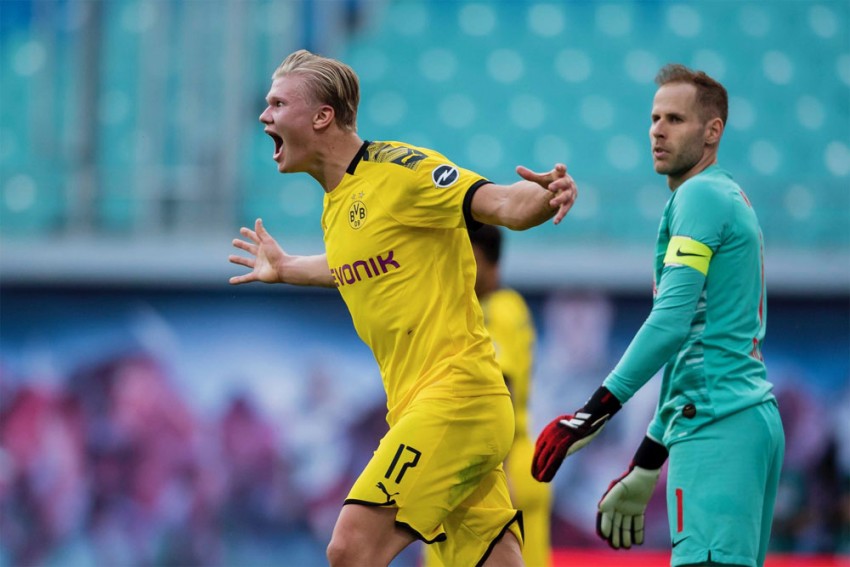 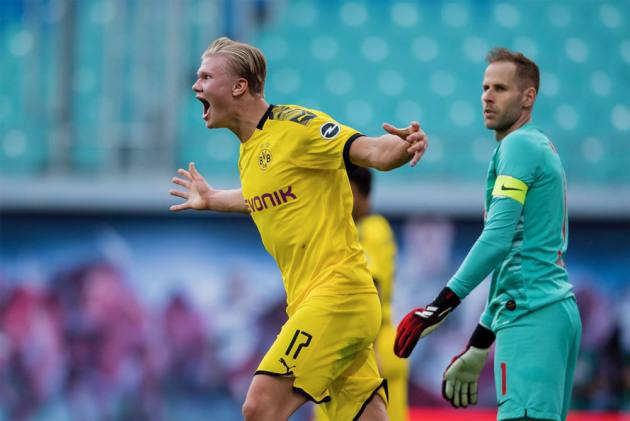 Erling Haaland scored twice as Borussia Dortmund made sure of a second-place finish in the Bundesliga with a 2-0 victory away at RB Leipzig. (More Football News)

Haaland's left-footed finish fired low beyond Peter Gulacsi in the 30th minute gave the visitors a deserved lead as they dominated in the first half.

Indeed, a lethargic Leipzig were indebted to their Hungarian goalkeeper for keeping the gap down to one, the visitors - who had Giovanni Reyna making his first league start with Jadon Sancho on the bench - seizing control from the outset.

Haaland was twice denied in quick succession by Gulacsi, who was also required to turn aside a fierce strike from Thorgan Hazard.

However, Dortmund's dominance eventually resulted in an opener. A flowing team move - one that began deep in their own territory - was finished off by Haaland converting Reyna's unselfish lay-off inside the penalty area.

Mateu Morey failed to mark his maiden Bundesliga start with a goal as he poked wide when clean through early in the second half, while a combination of Gulacsi's legs and the crossbar denied Haaland adding a second.

But, after weathering a brief Leipzig rally, the Norwegian did score again in the third minute of added time, getting the final touch to convert Julian Brandt's low cross.

What does it mean? Mixed feelings for Dortmund

So second spot secured, but evaluating Dortmund's campaign depends on your overall outlook. The optimists will point to the emergence of teenage talents Haaland and Reyna as reasons to be upbeat for the future.

However, having spent big to close the gap on Bayern, they will come up well short in the final reckoning. BVB were also knocked out at the last-16 stage of the Champions League again, so has Favre really taken things forward in his second year in charge?

A Rey of hope

Denied the chance to make his first league start when injured in the warm-up against Schalke last month, Reyna made up for lost time. The United States international's touch to tee up Haaland's goal was sublime.

The Germany international had just one attempt at goal before he was substituted. Still, his goals this season seem set to secure Leipzig a place in next season's Champions League, their cause aided by Bayer Leverkusen losing away to Hertha Berlin on Saturday.

The final round of fixtures in the Bundesliga season take place next Saturday. Dortmund host Hoffenheim, while Leipzig travel to Augsburg hoping they