Marcus Rashford scored twice as Manchester United began their Premier League campaign with an emphatic 4-0 win over Chelsea at Old Trafford on Sunday. 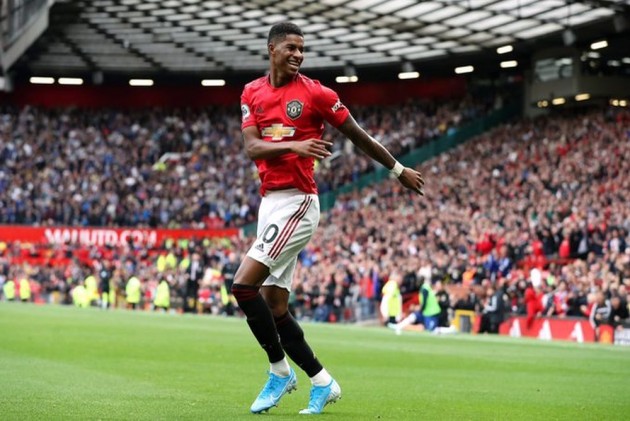 Red Devils manager Ole Gunnar Solskjaer had suggested in pre-season Rashford and Martial were set to share striker responsibilities this term and they were the inspiration as United clinched an emphatic opening-day win, albeit one that somewhat flattered them.

Chelsea certainly edged a first half that was arguably more entertaining for its seemingly constant stream of errors than anything else, but United led 1-0 at the break thanks to Rashford's penalty, despite Tammy Abraham and Emerson Palmieri hitting the post for the visitors.

Quality initially remained at a premium in the second half, but two fine goals – one apiece for Rashford and Martial – in the space of 95 seconds after the hour turned United's nervy lead into a comfortable one, with debutant Daniel James completing the scoring late on.

It took Abraham – the scorer of 26 Championship goals with Aston Villa last season – just four minutes to try his luck, striking the left-hand post from 18 yards.

A United side featuring new signings Harry Maguire and Aaron Wan-Bissaka took the lead against the run of play 14 minutes later, Rashford coolly finding the top-left corner with a penalty after being clumsily felled by the hapless Kurt Zouma.

While United's nerves settled a little with the goal, Chelsea continued to look the better side and went close twice towards the end of the first half – Ross Barkley forcing David de Gea into a vital save, before Emerson struck the post from close range.

Solskjaer's men took control just past the hour, though, as Chelsea were caught on the break and Martial bundled in Andreas Pereira's sublime cross.

It was three shortly after, Paul Pogba providing an excellent assist after an underwhelming first-half display, clipping a ball over Cesar Azpilicueta for Rashford to bring down and nonchalantly slot past Kepa Arrizabalaga.

James, introduced for Pereira, got in on the act nine minutes from time – his deflected effort beating Kepa to round off what ultimately turned into a great day for a United side that started shakily.

What does it mean? Solskjaer building United in his 'baby-faced' image

United's starting XI was the youngest named by any manager on the opening weekend of this Premier League season, with an average age of 24 years and 227 days. Solskjaer has insisted he will look to blood as much youth as possible, and he certainly appears to be living up to that.

Another pledge was to play quick, attacking football. They did not do that for the entire match, but with Rashford and Martial generally among their better players, it seems Solskjaer's plan has legs.

Much has recently been said regarding Rashford's ability to lead the line for United, particularly after Romelu Lukaku's departure left him as the club's senior striker. He did well on Sunday, running the channels effectively and grabbing two goals.

Azpilicueta fails to lead by example

Usually Chelsea's most dependable defender, Azpilicueta did not meet that criteria at Old Trafford. He allowed Martial to get ahead of him for the second goal and was then caught out badly for the third.

United travel to Wolves a week on Monday for their second Premier League outing of the campaign. Chelsea play their first match at Stamford Bridge this season a day earlier against Leicester City, though they first have the UEFA Super Cup against Liverpool to contest on Wednesday.