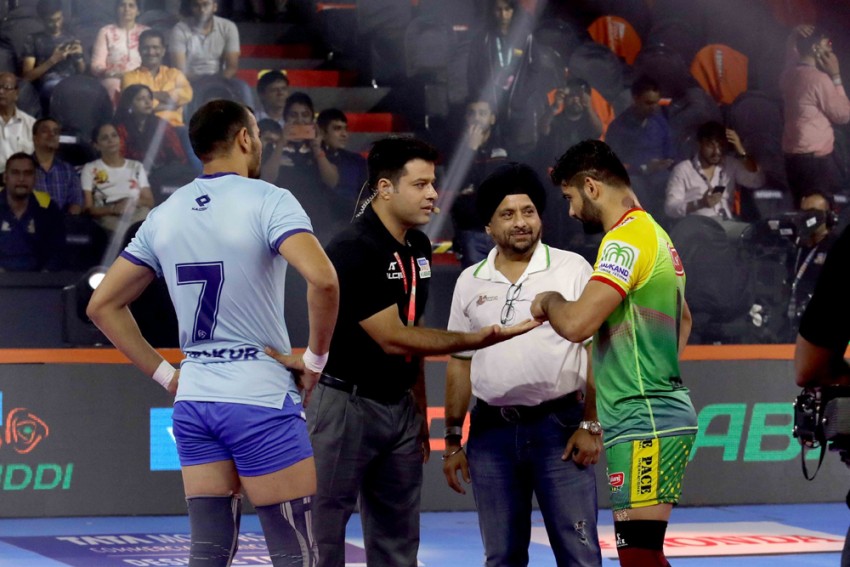 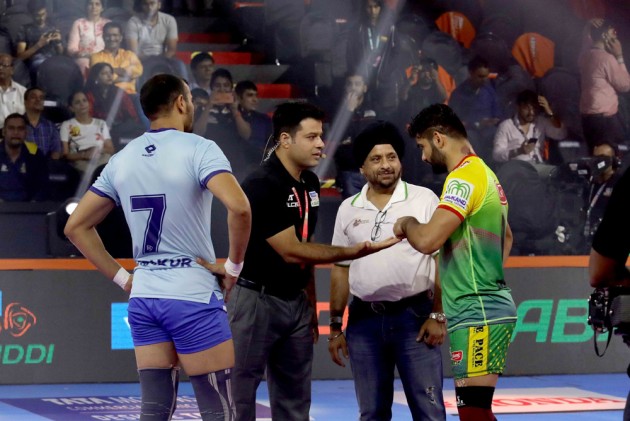 The match was billed as an encounter between "The Showman" Rahul Chaudhari against the "Record Breaker" Pardeep Narwal, who are the two most successful raiders in Pro Kabaddi League history.

But it turned out that the defence of Patna tilted the match in their favour with super tackles throughout the match.

Jaideep scored seven tackle points and was ably supported by young Monu who chipped in with a strong all-round performance. Rahul Chaudhari completed 900 raids, making history in Pro Kabaddi League Season 7and top-scored with five points for the Tamil Thalaivas.

Jaideep, on the other hand, was a rock at the back for Patna Pirates and showed tremendous amount of strength and toughness.

Rahul Chaudhari, who always delivered his best against Patna, got his first raid point in the 4th minute to give Thalaivasa 4-0 lead. The first half was all about super tackles for Patna Pirates.

Jaideep forced one in the 4th minute to get Patna off the mark. It was one of those rare occasions when Pardeep Narwal failed to open his account in the first half.

With Narwal misfiring, it was left to Patna's defence to get the points on board. Ajay 'Iceman' Thakur is the 2nd leading raid point scorer against Patna with 110 raid points.

Hadi Oshtorak forced a super tackle in the 17th minute to send Rahul Chaudhari to the bench and averted an all\R- out for Patna Pirates. At the end of the first half, both teams were levelled at 11 points each.

Chaudhari, who is the all\R- time leading raid point scorer against Patna Pirates with 145 raid points in 15 matches, which is also the most by any player against a single team, scored just one point in the first half.

For Thalaivas, Manjeet Chhillar picked up four tackle points in the first half alone. Ajay Thakur, who reached 600 raid points creating history in the Pro Kabaddi League Season 7, had a quiet match.

Patna Pirates began the second half on the same note as they forced another super tackle to lead 14-13 after 27 minutes.

Rahul Chaudhari picked up a two-point raid to level the match at 16-16. Patna Pirates then forced another tackle to take 18-16 lead in the 32nd minute.

In the 38th minute, Pardeep Narwal got his first point and sent Manjeet Chhillar to the bench.

In the last minute Rahul Chaudhari made an unforced error and handed Patna Pirates a victory in the end.

Maninder Singh was the chief architect of Warriors' win as he scored 14 raid points and got able support from Mohammed Nabibakhsh who chipped in with 8 crucial raid points.

For Puneri Paltan, Girish Ernak scored three tackle points and Pankaj Mohite top scored with 6 points but Bengal Warriors had an answer to everything their opponents threw at them.

Bengal Warriors made the best start possible as Maninder Singh made a super raid to give them a 4-1 lead. Puneri Paltan recovered from the early onslaught and forced a super tackle in the 5th minute to trail 4-5. The next few minutes was all about Bengal Warriors as they scored seven straight points, including an all out, to lead 11-4.

Pankaj Mohite picked up two quick raid points for Puneri Paltan as they trailed 7-13 after 14 minutes. Maninder Singh produced another super raid in the 15th minute to give Bengal Warriors a 16-7 lead.

Bengal Warriors ended the first half on a high as they led 18-9 at the break.

Bengal Warriors began the second half in an emphatic manner as they inflicted an all out in the 24th minute to lead 24-11. Maninder Singh completed his Super 10 in the second half as he continued to hurt Puneri Paltan.

Mohammed Nabibakhsh produced a terrific Super Raid in the 29th minute as Bengal Warriors inflicted another all out to lead 33-11.

Puneri Paltan were down and out by this time and Bengal Warriors continued to pile the points. Rinku Narwal achieved a High 5 and also reached the 50 tackle points landmark in Pro Kabaddi League.

Pankaj Mohite scored with a two-point raid in the 33rd minute as Puneri Paltan trailed 16-37.

Bengal Warriors took their foot off the pedal as Pankaj Mohite picked up a slew of raid points to reduce the margin of defeat.

Bengal Warriors forced a super tackle in the 37th minute to lead 40-19.

Bengal Warriors picked up a couple of more points in the last two minutes and emerged victorious in the end.