The first time Pep Guardiola was drawn to face a Bundesliga team in the Champions League as Manchester City manager, the match was postponed after a torrential pre-match downpour soaked the Etihad Stadium. (More Football News)

Twenty-four hours later, Borussia Monchengladbach were swatted aside 4-0 but there were some other, more incongruous storm clouds hovering.

Sergio Aguero scored a hat-trick, already his second of the campaign to move on to nine goals in his first five outings under Guardiola.  A brace that weekend at Swansea City took him to 11 in six, but his manager was not completely satisfied with the bigger picture.

"Sergio just has a talent to score goals that is natural, I cannot teach him that," Guardiola said.

"What I can tell him is there is a team behind him that is going to help him. I want to convince him to help them and, if it happens in that way, he's going to score a lot of goals."

Those fraught moments in Guardiola and Aguero's early relationship at City, one that looked to be hurtling towards an early end when Gabriel Jesus arrived in January 2017 and displaced the Argentina striker from the starting line-up, were long forgotten in the glowing tributes paid last week.

Aguero will leave City when his contract expires in June as the club's all-time record goalscorer and the top scoring overseas player in Premier League history.

Bundesliga opponents are back on the agenda this week, with Borussia Dortmund in town for the first leg of a Champions League quarter-final. Erling Haaland, presumed by many to be Aguero's most suitable heir, will be the focus of much pre-match attention.

Should City emerge from the pack of European heavyweights to claim Haaland's signature, the experience of Guardiola's previous centre forwards – from those who eventually thrived like Aguero, to those who fell by the wayside – suggest there would be plenty of hard work ahead for the Norwegian youngster.

Guardiola's most celebrated innovation during his trophy-laden stint in charge of Barcelona was Lionel Messi's deployment as a false nine, helping Aguero's compatriot to flourish into he world's finest player.

However, more traditional centre-forwards experienced collateral damage. Samuel Eto'o and Thierry Henry flanked Messi in the 2009 Champions League final triumph over Manchester United. A year later they had both left Camp Nou, as had Zlatan Ibrahimovic after a year under Guardiola most notable for his string of subsequent withering comments about the Catalan tactician.

If the assumption was these supreme strikers were simply victims of playing second fiddle to Guardiola's star pupil, his stint at Bayern Munich suggested something more baked in to his football philosophy that meant centre forwards would adapt to the coach and not the other way around.

After a season under Guardiola in 2013-14, Mario Mandzukic stomped off to Atletico Madrid and accused the coach of a lack of respect. Robert Lewandowski took his place but the returns that now make the Poland superstar the most feared number nine in Europe were not immediately forthcoming.

A haul of 17 Bundesliga goals in 2014-15 was way below the levels he would go on to set. The breakout moment of his Bayern career came in September 2015, when he ravenously rattled home five goals in a mind-boggling nine minutes against Wolfsburg. An often-forgotten plot point of those Lewandowski heroics is they came as a substitute. Guardiola had started Mario Gotze, Thomas Muller and Douglas Costa in the sort of fluid forward line that did for the likes of Ibrahimovic and Mandzukic. 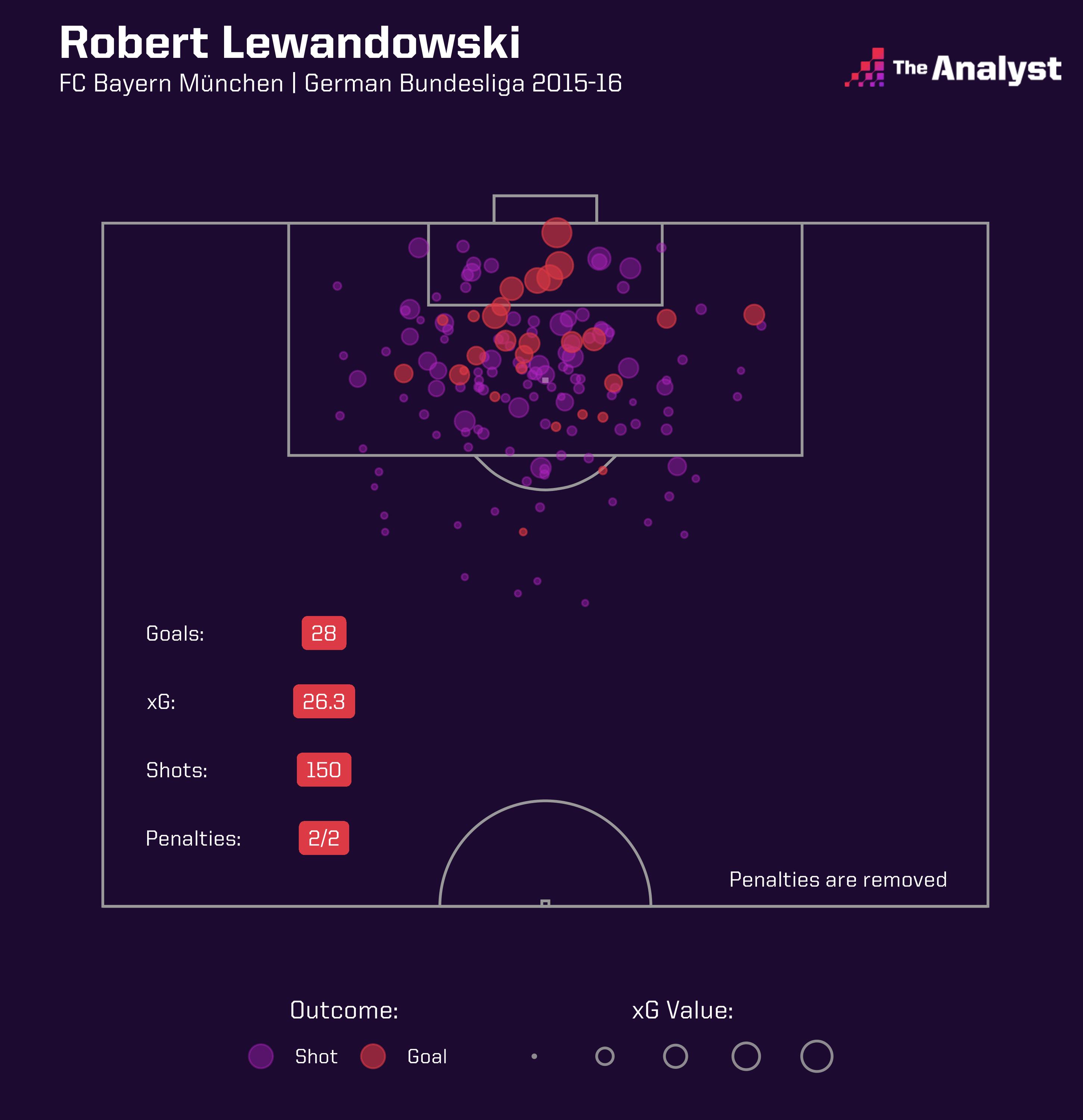 Since August 2011 – the month of Aguero's City debut and the first season Lewandowski was a regular starter at Dortmund - only Messi (483) and Cristiano Ronaldo (460) have scored more goals across all competitions among players from the top five European leagues than Bayern's star striker.

If Haaland were to link up with Guardiola, history suggests these are the sort of levels he will have to hit. The signs of the past 18 months point promisingly in that direction.

There were echoes of Lewandowski's Wolfsburg heroics – and, for that matter, Aguero's "anything you can do…" efforts of five goals in 20 minutes against Newcastle United a month later – in Haaland's sensational Bundesliga debut last January 18.

The 20-year-old came on as a second-half substitute and fired a 23-minute hat-trick to inspire Dortmund's 5-3 win over Augsburg.

In the spell from that game onwards, Haaland has 49 goals in all competitions, a haul only bettered across the top five leagues by Lewandowski (67) and Ronaldo (52). Despite being in contention for four major honours this term, City's leading scorers during the same period are Raheem Sterling and Jesus, with 24 and 22 respectively.

It seems Haaland would offer an obvious uplift, thanks in large part to his remarkable efficiency in front of goal. At Dortmund, he boasts a shot conversion rate of 33.6 per cent – better than any other player with 20 or more goals during this time.

For context, Lewandowski is back on 27.8 per cent and Romelu Lukaku and Andre Silva – each speculated alternatives should City be unable to land Haaland – convert just under a quarter of their attempts with 23.7 and 24.5 per cent respectively. Jesus (17.5) and Sterling (16.9) are about half as reliable as the man they will face this week. 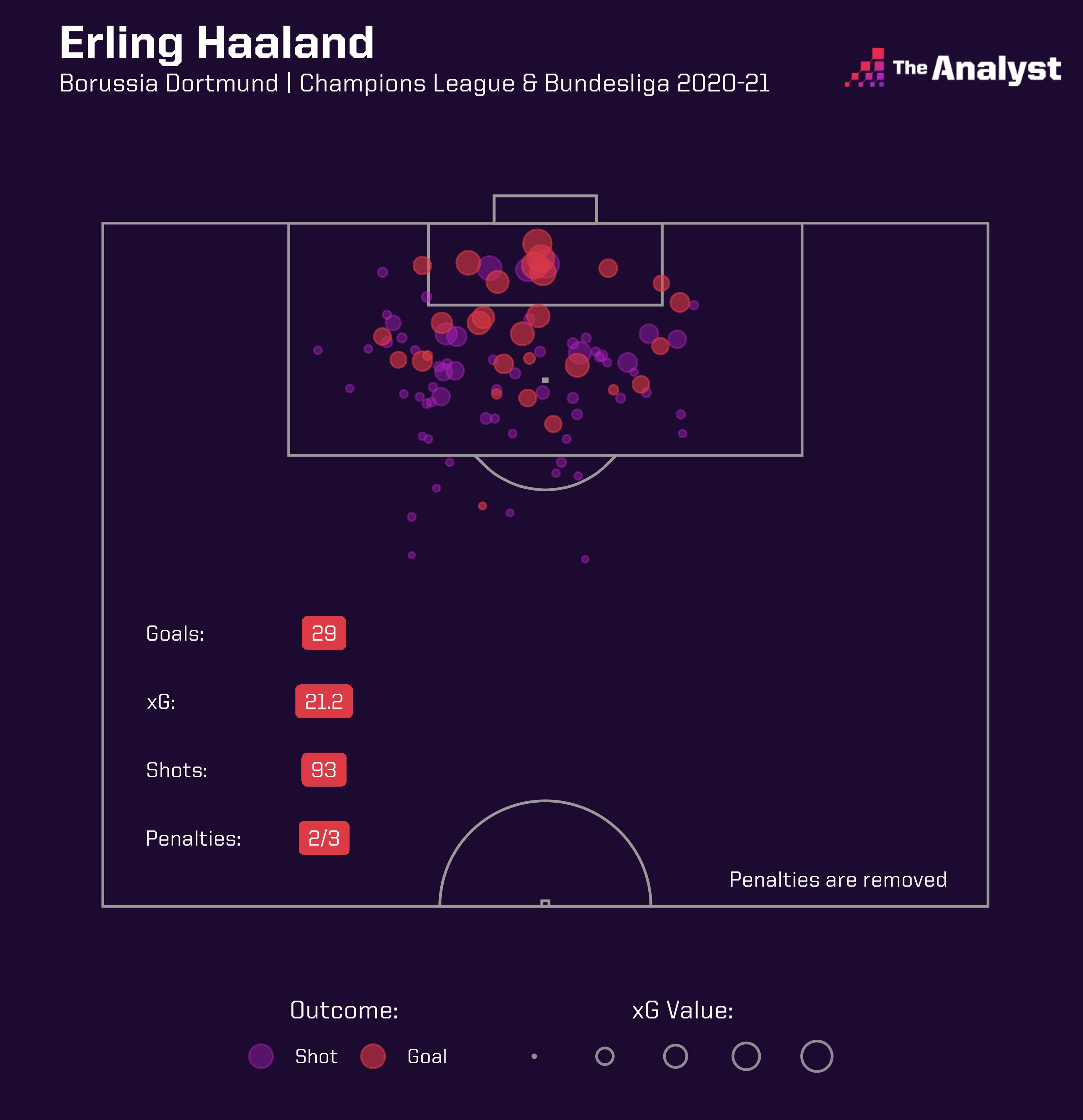 A look at Haaland's expected goals (xG) figures for this season suggests judicious shot selection is a key part of his lethal makeup.

In the Bundesliga and Champions League combined, he has 29 non-penalty goals from 93 shots that have a cumulative xG value of 21.2.

By way of comparison, in 2018-19 – the campaign that will stand as his last truly great one in City colour – Aguero scored 24 times from open play in the Premier League and Champions League, outperforming an xG of 20.6 accumulated from 144 attempts.

Haaland's efficiency is again illustrated but a higher xG figure from 51 fewer efforts shows he is coldly selective when it comes to taking on shots, usually only pulling the trigger when a clear opportunity presents itself and to great success.

The speculative strike is not something he has a need to call upon too often, which holds an obvious appeal for a coach like Guardiola, who places such an emphasis on his team controlling every aspect of matches.

Attackers going rogue and firing off shots from all over the place is not high on the list of things he enjoys to see, placing a big tick next to Haaland.

Running and pressing until the end

Kevin De Bruyne's midfield masterclass to inspire a 2-0 weekend win at Leicester City was something of an archetype for what is required from City's big hitters.

Along with moments of high artistry such as his immaculate throughball to make Jesus' game-sealing goal possible, the Belgium international regained possession 14 times and contested 20 duels.

"This is one of our identities. When the most talented players in the world are able to do this kind of job," Guardiola said.

"There is no negotiation on this. You can play really badly but in terms of running and pressing for your team-mates until the end, we have to do it. Do it for your mates, because in the next action your mates are going to do it for you.

"We cannot deny that in the five years we were together the players we had run and fight every single game. That is one of the things I am proud of the most."

So, how would Haaland shape up to this non-negotiable part of the job description?

In 2020-21, the Dortmund centre-forward has won possession in the final third 31 times, made 65 recoveries overall, nine interceptions and contested 195 duels.

Even taking into account a BVB playing style that can be more chaotic than Guardiola's finely grooved City, these efforts stack up well compared to peak Aguero.

Only once under Guardiola has he won back the ball deep in opposition territory more frequently – 33 times in 2018-19, when he made his sole foray into double figures for interceptions (13) during the Catalan's tenure. 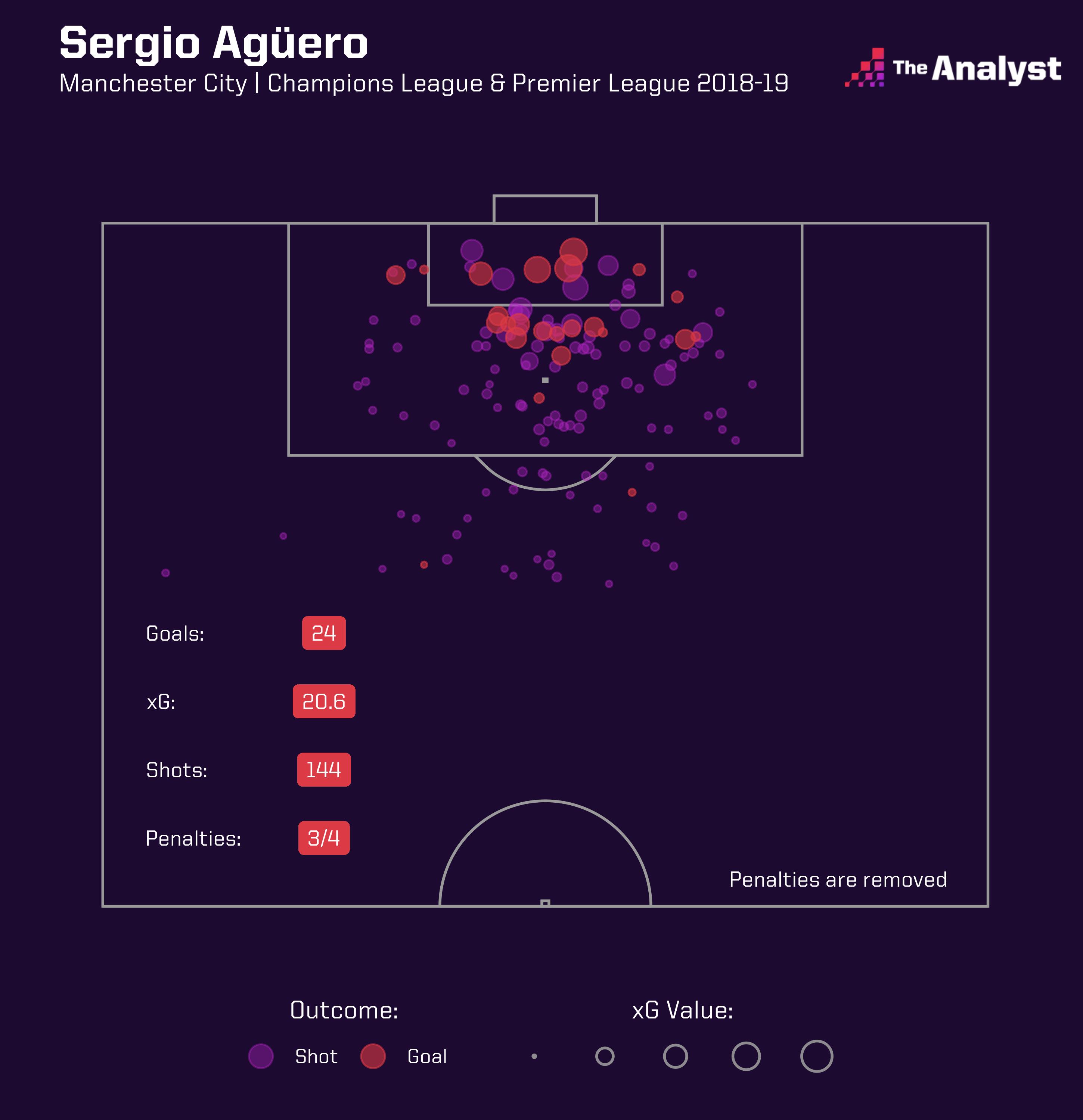 Aguero made 122 recoveries and contested 481 duels during Guardiola's first season at the helm in 2016-17, when City were some distance from their present model of efficient dominance. His recoveries/duels returns of 86 and 310 and 89 and 325 during the subsequent back-to-back Premier League triumphs are more in line with where Haaland might be at the end of the current campaign.

This begins to demonstrate that Guardiola's running and pressing until the end is not quite as advertised. Much as with Haaland's shot selection, there is an emphasis on picking your moments to lay down maximum effort. His is not the Heavy Metal Football under which the Dortmund of a previous era thrived, more Post-Rock Football laced with frequent and precise tempo changes.

In his final two seasons under Manuel Pellegrini, when City's sole major honour was the 2015-16 EFL Cup, Aguero won back possession in the final third 35 and 40 times – returns never bettered in the Guardiola era despite an improvement in his work off the ball being rightly lauded. A total of 126 recoveries in 2015-16 is one he has not topped, while 24 interceptions back in 2011-12 showed Roberto Mancini benefitting from the youthful enthusiasm of his record signing.

The idea that Guardiola strikers have to run themselves into the ground for scant reward is a horror story Mino Raiola might try to spin for his new favourite client. But Aguero's experience shows it is more of a "you scratch my back, I'll scratch yours" relationship.

Taking some time to adapt to Guardiola's methods is neither unusual nor limited to strikers, with Joao Cancelo and Rodri's second-season improvements this time around standing as the latest examples.

If Haaland became a blockbuster signing, there is no reason to think his rewards would be anything other than plentiful after a period of assimilation. For the next week or so, however, Guardiola's only concern will be keeping his precocious talents under wraps.