In the opener of the Olympic Qualifier, Indian team displayed grit and character as they dream of a spot in the 2020 Tokyo Games. They have defeated Indonesia third time straight in 2019 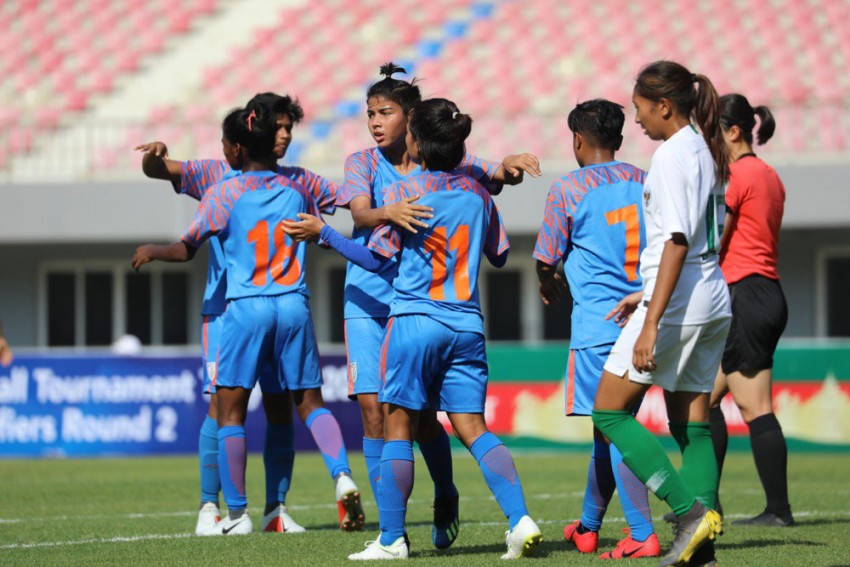 The Indian women's national football team took a step closer towards the dream to make it to the 2020 Tokyo Games after notching up a 2-0 victory over Indonesia in its opening match of the Olympic Qualifiers Round 2 on Wednesday.

Dangmei Grace's brace (27 and 67 minutes) proved to be the difference between the two sides.

Maymol Rocky's wards largely dominated the match in terms of both possession and chances created.

"We wanted to start our qualifying campaign on a winning note and we have done so. Indonesia proved to be tough opponents that committed bodies in defence but we found a way to gather three points," Maymol said after the match.

"It is important to keep the winning momentum alive and we were able to do so. We are taking one match at a time and our focus shifts on our next opponents Nepal (on April 06)," she added.

Maintaining the winning momentum after the success of their fifth consecutive SAFF title triumph, the Indian women applied pressure on the opponents right from the opening minute.

Some crafty work down the wings by Sanju and Ratanbala Devi wreaked havoc on the opposition's defence, which failed to counter the Indians between the lines.

Sanju's cross in the 24th minute caused chaos in the Indonesian defence with one defender almost turning it into an own goal, before clearing the lines.

Sandhiya's run in the 26th minute, after she was found by Sanju left a trail of Indonesian defenders in her wake – sidestepping one and casually rolling the ball into the space to create a shot, beating another.

Her stinger of a shot from inside the box was saved by the Indonesian custodian Riska Julianti but Dangmei Grace applied the finishing touches from close range to give India the lead in the 27th minute.

The India defence made quick work of any Indonesian counter-attacks to equalise deficits with goalkeeper Linthoingambi Devi not being tested even once.

India continued with their attacking tempo in the second half as well.

Ratanbala Devi's shot from distance in the 56th minute earned an uncanny save from the Indonesian goalkeeper as she fluffed a routine collection. Three minutes later Dangmei Grace failed to score from close range after Sanju found her with a rasping cross that bewildered the Indonesian defence line.

In the 67th minute, India doubled their lead when Dangmei Grace once again applied the finishing touches to a shot from Sumithra Kamaraj, which was haphazardly parried away by Riska Julianti.