Manchester United have been a team on the rise in 2020. Unfortunately, goalkeeper David de Gea is heading in the opposite direction 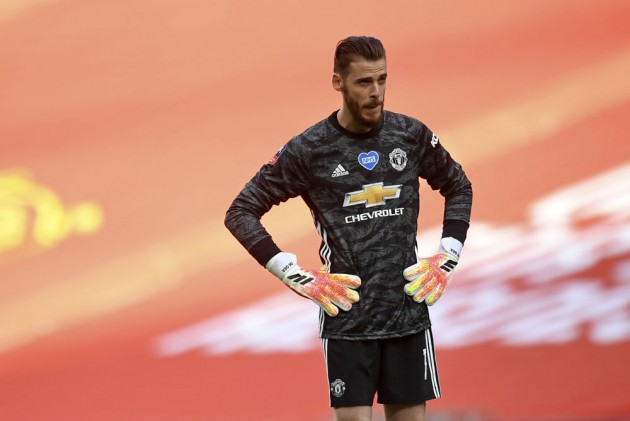 In a recollection that jars somewhat, given the Spain international's latest addition to his catalogue of horrors at Wembley on Sunday, Schmeichel recalled the moment he became convinced by his fellow gloveman's brilliance.

It was a game against Chelsea.

"It was at Stamford Bridge in his first season. We'd gone 3-0 down and fought back to 3-3, and then, right at the end of the game, he clawed away a free-kick from Juan Mata, right in the top corner, and saved a point for us right at the end," Schmeichel explained.

"From that point on, I was looking at David and thinking: this guy… he's something special. This guy's mentality is incredible. You can't break him."

For his own sake, you have to hope De Gea is unbreakable after what transpired in Chelsea's 3-1 FA Cup semi-final win. For a man who had a strong case when it came to identifying the outstanding European goalkeeper of the previous decade, it is beginning to feel like we've reached the point of no return.

United's number one had little time to react when Olivier Giroud got on the end of Cesar Azpilicueta's cross in the final minute of the first-half's stoppage-time marathon.

Victor Lindelof carelessly let the France striker get across him. Still, De Gea got plenty on the ball, certainly enough for him not to have to scramble after it as it crossed the goal line.

Schmeichel and other members of the goalkeepers' union might have had some sympathy for De Gea at that point. He would certainly have delivered a verbal volley to Lindelof somewhat at odds with harmonious Scandinavian relations.

But when Mason Mount scored Chelsea's second, De Gea had nowhere to hide, even within the oddity that is a deserted national stadium.

6 - Manchester United have been eliminated from the FA Cup by Chelsea for a sixth time (including three of the last four seasons) – only Arsenal (7) have knocked the Red Devils out of the competition on more occasions. Agony. #MNUCHE pic.twitter.com/q7ldUjR8Gv

Mount's strike was no more than speculative, although goalkeepers who cough up frequent errors tend to invite such probes. It is debatable whether opposition players would have felt such shots at goal were not worth their time a few years ago.

Indeed, it is easy to forget the heights from which De Gea has fallen.

Consider United's illustrious history, littered with football's most famous names. De Gea is the only man to have won the Sir Matt Busby Player of the Year award on four occasions.

Those gongs arrived over the course of five seasons, spanning 2013-14 to 2017-18. He stood as the last remaining example of excellence at a club that prided itself on such a standard under Alex Ferguson.

Then came a chastening World Cup with Spain and things have never really been the same since.

During the five seasons leading up to Russia 2018, De Gea made three errors leading to goals in Premier League matches, with none at all in 2013-14 and 2017-18. In the two since, he has committed seven. Those numbers, of course, do not include his FA Cup aberration.

A player of such accomplishment deserves better than to be the subject of Roy Keane's latest frothing viral clip, but that ignominy probably only stops now if Ole Gunnar Solskjaer decides to move on. It is beyond the point where the United boss should do so.

He has Argentina international Sergio Romero waiting in the wings and Dean Henderson excelling on loan at Sheffield United. Sunday's defeat was United's first since January, meaning a resurgent United now a more enticing prospect for would-be signings than they have been for a long while.

"This team is evolving under Ole and that means that David's role is changing too," he said. "If you're a goalkeeper that has been busy for years, and now you're not busy, you have to change your game a little bit.

"You need to find new ways of keeping your concentration, of staying with the game."

As Mount wheeled away in celebration, De Gea could not have looked further away from the game and the moment where his team needed him.

Solskjaer has undeniably made United a more progressive, attacking and attractive side. His next positive move should be to find a new number one for next season.