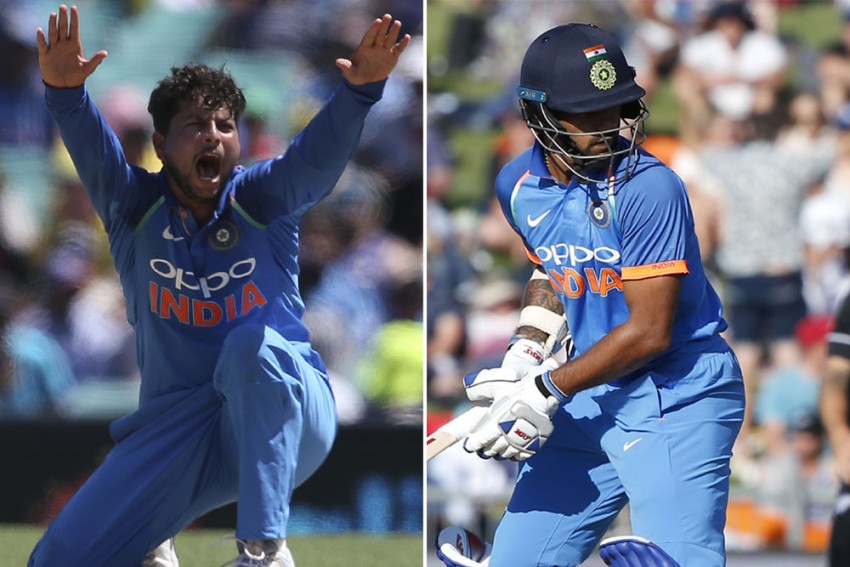 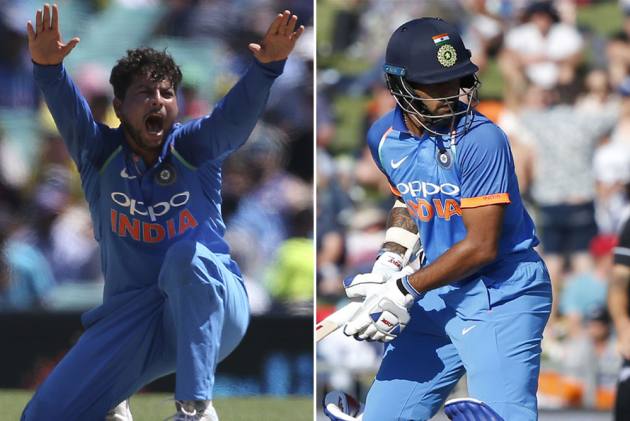 India won by eight wickets in DLS method after the target was revised by one run thanks to unprecedented sun stoppage. Ambati Rayudu hit the winnings runs, a single off the fifth ball of the 35th over, bowled by Tim Southee. Shikhar Dhawan remained unbeaten on 75.

Entering the five-match series following maiden Test and ODI series triumphs in Australia, India signalled their intent with a clinical display, which saw them chase down a revised target of 156 by eights wickets in 34.5 overs.

The Duckworth-Lewis method came into the picture for an interruption which was not caused by rain for the first time.

On a near-perfect day, the only thing that didn't go their way was the toss. But India made light of that by bowling out the home team for a paltry 157 in 38 overs.

Wrist spinner Kuldeep Yadav was the most successful bowler, returning figures of 4/39 in 10 overs, while seamer Mohammed Shami finished with an excellent 3/19 in six overs. There were also two wickets for leg-spinner Yuzvendra Chahal.

Captain Kane Williamson top-scored for the hosts with 64 off 81 balls.

In response, Shikhar Dhawan began the innings with a flurry of boundaries, eventually finishing as the top-scorer with 75 off 103 balls.

Man of the match: Mohammed Shami

After 33 overs, India were 148/2 with Shikhar Dhawan and Ambati Rayudu unbeaten on 73 and 8 respectively.

Virat Kohli departed after making 45 off 59 balls, in the 29th over, caught behind off Lockie Ferguson.

After a brief stoppage, match was reduced to 49 overs with India's target revised to 156.

Shikhar Dhawan and Virat Kohli have added 50 runs from 46 balls for the second wicket. India need another 65 runs.

For many, this is new. And this was what one of the umpires, Shaun Haig told the broadcasters: "The setting sun is directly in the eyes of the batsmen. So we got to consider the safety of the players, umpires. So we have decided to suspend play until conditions improve.

"This is the first time in my 14 years I have seen something like this happen on a cricket field. Good news is we have 30 minutes extra time. We are hoping to be back in 30 minutes and it will still be a 50-over game."

During the stoppage, Mayor of Napier Bill Dalton jokingly said that "The idea was to put our executive who is the largest in New Zealand on top of the grandstand so that he can block the sun but then we thought he might get bored. We are working through with a plan to sort this issue." Jokes apart, he did acknowledge the gravity of the situation.

"We were very conscious that this would happen and had made a plan for it," he said.

Celebrated commentator has this to say:

That is a first for me. Game called off because the setting sun is in the batsman's eyes! Surely pitches have to be laid north-south!!

Post dinner break, India lost Rohit Sharma off the very first ball. Then, in a very unusual manner, the play was stopped due to the setting sun. India were 44/1 after 10 overs, still needing 114 runs.

Steady start from India. 41 without loss after nine overs with Shikhar Dhawan (29) and Rohit Sharma (11) laying the perfect platform. India still need another  117 runs from 41 overs.

That's some demolition job by the Indian bowlers. After Mohammed Shami set-up with an early burst, spin twins Kuldeep Yadav and Yuzvendra Chahal completed the job by sharing six wickets between them.

Yuzvendra Chahal struck in the 15th over to remove dangerous Ross Taylor (24), caught and bowled. The veteran batsman was in the middle of building a good stand with Kiwi skipper Kane Williamson. The hosts were 66/3 after 17.

Mohammed Shami removed both the New Zealand openers, Martin Guptill (5) and Colin Munro (8), to give India just the perfect start. Kiwis were 20/2 after seven overs. By removing Guptill, he also became the fastest Indian to take 100 ODI wickets.

confident India, which won their maiden bilateral ODI series in Australia, meet a brimming New Zealand in a fight of equals.

New Zealand in their own backyard have always been a force to reckon with and the touring Indian teams over the years will testify that having won only 10 out of the 35 ODIs, including a 0-4 drubbing during the last series in 2014.

As international cricket returns to McLean Park in Napier, India's top-order will be tested against New Zealand swing bowlers. The clash, however, will see spinners playing their own parts.

India have not won a series for nearly a decade. In 2009, MS Dhoni led India to their first ever ODI series. Then Virat Kohli, who won the big three ICC awards on the eve of the match, was not selected for that tour.

In the last tour, India suffered a 0-4 thrashing in the five-match series in 2014.