The Golden State Warriors suffered a season-worst 53-point defeat at the hands of a rampant Toronto Raptors in the NBA on Friday night. 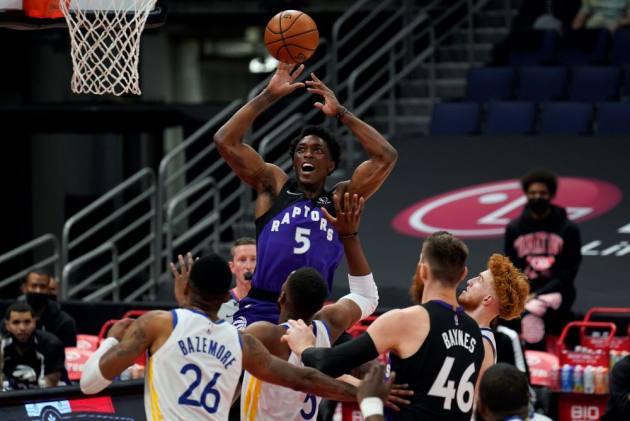 The Golden State Warriors suffered a season-worst 53-point defeat at the hands of a rampant Toronto Raptors in the NBA on Friday night. (More Sports News)

The Raptors led by as much as 61 points in the last quarter, threatening the NBA's all-time record win of 68 points when the Cleveland Cavaliers beat the Miami Heat in 1991.

Pascal Siakam, on his 27th birthday, did plenty of damage with 36 points, seven rebounds and five assists as Toronto won the second and third quarters with a cumulative 81-30.

The Warriors' franchise record defeat is also 63 points, so some late points ensured they avoided further ignominy as they lined up without Stephen Curry and Draymond Green.

"Without Steph and Draymond out there, I think we were a little bit rudderless when things went south," Warriors coach Steve Kerr said.

The Phoenix Suns also handed out a hiding, beating the Oklahoma City Thunder 140-103, with guard Devin Booker scoring another haul of 32 points.

The Suns have won five in a row and are firm in second in the West with a 34-14 record.

Birthday buckets for Siakam! @pskills43 tallies a season-high 36 PTS in 3 quarters of action to lift the @Raptors on his birthday! pic.twitter.com/HtcDLYIhpx

Giannis Antetokounmpo produced a massive 47-point performance as the Milwaukee Bucks flexed their muscle with a 127-109 win over the Portland Trail Blazers.

The Blazers, who have been in good form led by Damian Lillard, were humbled by the title contenders but Giannis played a major role.

The Greek forward scored 47 points and had 12 rebounds, while guard Jrue Halliday added 22 points and 10 assists to improve their record to 31-17.

Kyle Kuzma got 30 points as the Los Angeles Lakers claimed another win without LeBron James, getting past the Sacramento Kings 115-94.

The ladder leaders Utah Jazz made it eight wins in a row with a 113-106 victory over the Chicago Bulls led by Donovan Mitchell's 26 points, while Rudy Gobert had a double-double with 19 points and 13 rebounds.

Jaylen Brown had 22 points and 11 rebounds in the Boston Celtics' 118-102 triumph over the Houston Rockets while Luka Doncic starred as the Dallas Mavericks beat the New York Knicks 99-86.

Charlotte Hornets forward Gordon Hayward suffered a foot sprain which will likely sideline him for a period in his side's win over the Indiana Pacers. He'd shot 13 points, had eight rebounds and six assists before being forced out of the game, joining LaMelo Ball in the Hornets injury ward.

It's hard to go past Giannis, with his 47-point display making him the second player in league history to score 45-plus points while shooting 85 per cent or better from the field along with having 10 or more rebounds. Wilt Chamberlain is the other. Exclusive company.

Giannis Antetokounmpo is just the second player in @NBAHistory to score 45+ points while shooting 85% from the field or better and grab 10+ rebounds in the same game. He joins Wilt Chamberlain (53 points, 20-23 FGM, 38 rebounds on 12/20/1967). @EliasSports pic.twitter.com/crcpIRy5Q1

Several top sides are in action on Saturday including the leaders Utah Jazz (37-11) against the up-and-down Orlando Magic (17-31).