Giannis Antetokounmpo produced a performance not seen since Charles Barkley in the 1980s as the Milwaukee Bucks won again. 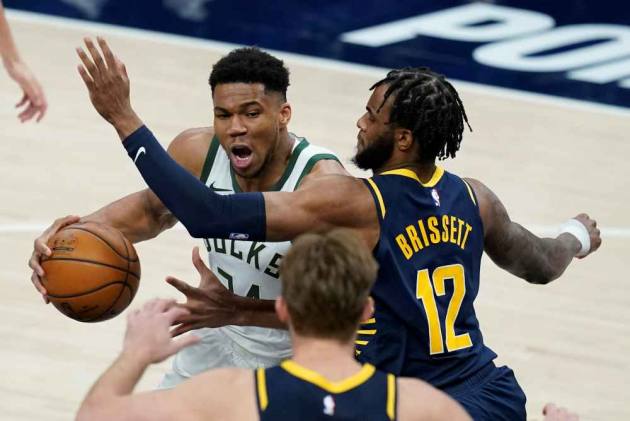 Giannis Antetokounmpo produced a remarkable individual performance to keep the Milwaukee Bucks in the Eastern Conference top two hunt with a 142-133 win over the Indiana Pacers on Thursday. (More Sports News)

Antetokounmpo scored 40 points, with 15 rebounds and six assists as the Bucks closed in on the second-placed Brooklyn Nets (46-24), improving their record to 45-25.

Milwaukee shot at 57 per cent on the night, boosted by the Greek forward who shot 14-from-18 from the field, going at 77.8 per cent.

Antetokounmpo's display was the first since Charles Barkley in 1988 where a player had at least 40 points, 15 rebounds, five assists and shot at higher than 75 per cent.

At the top of the Eastern Conference, the Philadelphia 76ers missed the chance to claim first seeding again, going down 106-94 to the surging Miami Heat.

The 76ers trailed by 19 at the half with Joel Embiid returning from illness, while Jimmy Butler had 16 points by the main break.

Butler finished with 21 points including four-from-four beyond the arc as the Heat claimed their sixth win from their past seven.

The Portland Trail Blazers left the door open for the Los Angeles Lakers to usurp them in the playoffs race after going down on the buzzer 118-117 to the Phoenix Suns.

C.J. McCollum, who had 27 points, had a shot to win the game on the buzzer but missed, meaning the Blazers move to 41-30, marginally ahead of the Lakers on 40-30 and seventh in the West. Damian Lillard had 41 points for Portland.

The New York Knicks kept up their push for a top four spot in the East with a 102-98 win over the San Antonio Spurs, who qualify for the play-in tournament after the Sacramento Kings lost.

Julius Randle had 25 points with nine rebounds and nine assists for the Knicks, while R.J. Barrett scored 19 of his 24 points in the second half.

MVP favourite Nikola Jokic faced off against Rookie of the Year candidate Anthony Edwards as the Denver Nuggets won 114-103 over the Minnesota Timberwolves.

Jokic dominated with 31 points and 14 rebounds, while Edwards had 29 points, seven rebounds and five assists.

The Atlanta Hawks made it 10 consecutive home wins with a 116-93 victory over the Orlando Magic led by Clint Capela with 14 points and 14 rebounds.

The Sacramento Kings' 116-110 loss to the Memphis Grizzlies means they are mathematically out of post-season calculations, which also means they long wait for playoffs basketball extends. The Kings have not made the playoffs since 2006.

Clippers on-song beyond the arc

The Los Angeles Clippers scored an outstanding 21 three-pointers as a team in their 113-90 win over the Charlotte Hornets. They went at 46.7 per cent from range with Reggie Jackson draining five after coming off the bench.

Got it moving and knocking down shots. pic.twitter.com/MFM28fziJS

The Philadelphia 76ers, after back-to-back losses, will look to seal top seeding in the Eastern Conference when they host the lowly Orlando Magic.