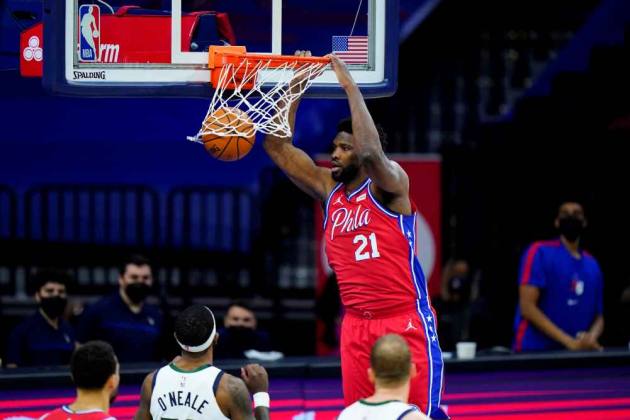 Joel Embiid enhanced his MVP credentials with a monster double-double as the Philadelphia 76ers trumped the NBA-leading Utah Jazz in a thrilling battle, 131-123 after overtime. (More Sports News)

Embiid hit a game-tying three-pointer with 5.3 seconds remaining to force OT – Eastern Conference leaders the 76ers outscoring the Jazz 13-5 in the additional period to reign supreme in Philadelphia on Wednesday.

MVP candidate Embiid finished with 40 points and 19 rebounds to fuel the 76ers to back-to-back wins heading into the break, with the All-Star Game scheduled for Sunday.

Sixers team-mate Tobias Harris scored 11 of his 22 points in overtime as the 76ers improved to 24-12.

Never a doubt after it left his hands. pic.twitter.com/dnM632ODpe

James Harden showed no mercy in his first game against the Houston Rockets since January's blockbuster trade to the Brooklyn Nets.

Former MVP Harden had 29 points, 14 assists and 10 rebounds for his eighth triple-double since joining the Nets, who downed the injury-hit Rockets 132-114.

T.J. McConnell put up 16 points on eight of eight shooting, 13 assists and 10 steals off the bench in the Indiana Pacers' 114-111 win at the Cleveland Cavaliers. McConnell became the first player in NBA history to record 10-plus steals and make 100 per cent of his field-goal attempts in a game, per Stats Perform. He also became only the 10th player with a 10-plus steal triple-double since steals began being tracked in 1973-74.

Trae Young ended the game with 32 points as the Atlanta Hawks edged the Orlando Magic 115-112.

Triple-doubles from Mason Plumlee (14 points, 11 rebounds and 10 assists) and Dennis Smith Jr. (10 points, 12 rebounds and 11 assists) inspired the Detroit Pistons to a 129-105 win over the Toronto Raptors. Norman Powell had a game-high 36 points for the Raptors.

Playing without LeBron James for the first time this season and with Anthony Davis already sidelined, defending champions the Los Angeles Lakers went down 123-120 to the Sacramento Kings. The Lakers have lost six of their last eight games, falling into a tie for third place in the Western Conference heading into the All-Star weekend.

The Rockets have lost 13 games in a row – the franchise's longest skid since dropping 15 straight in 2001.

Damian Lillard (22 points) scored the final eight points for the Portland Trail Blazers, including the game-winning three with 13.7 seconds remaining, in a 108-106 win against the Golden State Warriors. Stephen Curry's 35 points were not enough for the Warriors.

DAME. FROM. DEEP. @trailblazers up 2 with 13.7 left on ESPN! pic.twitter.com/aefe5Sam7F

The Los Angeles Clippers (24-13) will look to snap a run of back-to-back defeats before the All-Star break when they visit the lowly Washington Wizards (13-20) on Thursday.