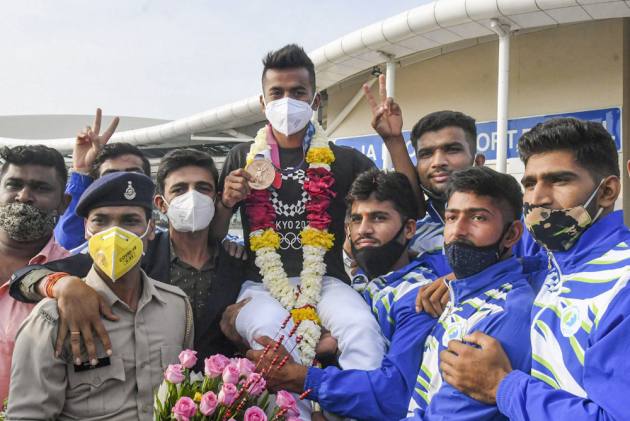 Hockey player Vivek Sagar, who was part of the Indian squad that won the bronze medal at the recent Tokyo Olympics, was felicitated by Madhya Pradesh Chief Minister Shivraj Singh Chouhan in Bhopal on Thursday.

The CM presented a cheque of Rs one crore and a shawl to the midfielder hailing from MP during a function held at Minto Hall in Bhopal, and also announced his appointment as the deputy superintendent of police (DSP) and a house for his family wherever they wish in the state.

"Sagar will be the DSP from today," an elated Chouhan said.

The CM also announced that each member of the Indian women's hockey team's Olympic squad will be given Rs 31 lakh for putting up a spectacular performance at the Games.

"Though the women's team stood fourth in the Olympics, they won the hearts of Indians by their magnificent play,'' he said.

The history-making Indian women's hockey team's dream of securing its maiden Olympic medal remained unfulfilled as it lost 3-4 to Great Britain in a hard-fought bronze play-off, but the stout-hearted side managed to record its best-ever finish at the Games last week.

Chouhan said that determination and passion bring forth success. "Just give them facilities and they will pull off miracles," he added.

"Vivek hailed from a humble family. His father is a teacher, while his mother a homemaker. They live in a kutcha house. Vivek used to play with broken sticks and even borrowed shoes," the chief minister said.

But despite the shortcomings, he had a passion for hockey that paid off. His father used to shout at him and ask him to study instead of playing…Similarly, my father would also ask me to study and keep away from politics, he added.

"Hockey had become a history before the spectacular show put up by Indian men's and women's hockey teams at the Tokyo Olympics. Now the game is witnessing a revival,” he added.

He asked her to launch a talent search for budding players in the state in order to hone their skills with an aim to lift the name of the country at the international level.

He said the state has made adequate budgetary allocations for sports activities and no hurdles will come in the way.

In her address, Scindia said that Chouhan has enhanced the budgetary allocations and boosted the morale of the sportspersons.

"We had been on the threshold of getting an Olympics medal for quite some time. Now, Vivek Sagar has opened that gate,” the sports minister said.

In his address, Sagar said that he joined the Madhya Pradesh Sports Academy in 2013, where he received good training, healthy diet, hockey equipment and other facilities.

He said that self-determination, discipline, hard work and respect for all pay off.

Earlier in the day, Chouhan and Sagar planted a sapling at the Smart City Park here.

After Sagar scored a goal in the match against Argentina that ensured India's place in the quarterfinals of the Olympics, Chouhan had spoken to the midfielder and congratulated him. The Indian hockey team later entered the semi-finals and won the bronze medal at the Olympics.