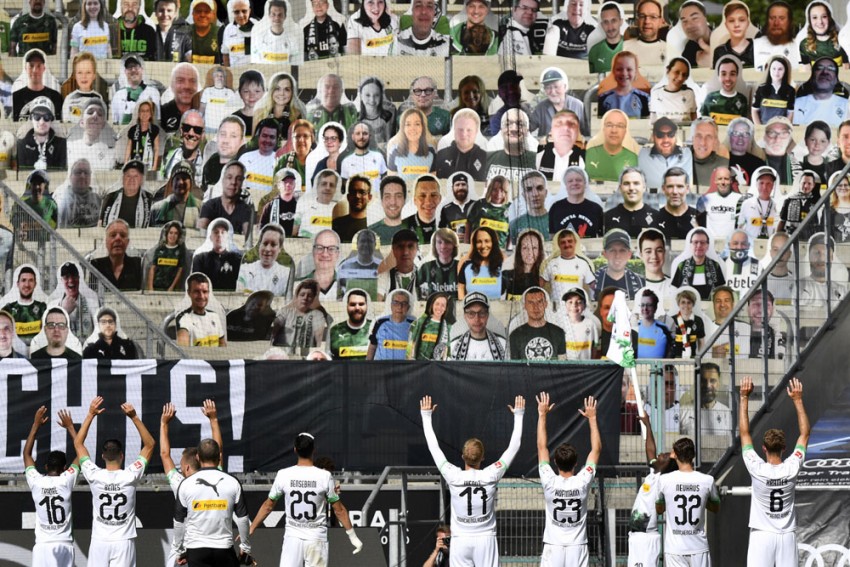 Moenchengladbach players celebrate in front of the cardboards with photos of fans displayed on the stands at the end of the German Bundesliga soccer match against Union Berlin on Sunday, May 31, 2020.
AP Photo/Martin Meissner, Pool
Omnisport 2020-05-31T21:23:02+05:30 Monchengladbach 4-1 Union Berlin: Thuram Takes A Knee As Foals Boost Champions League Hopes 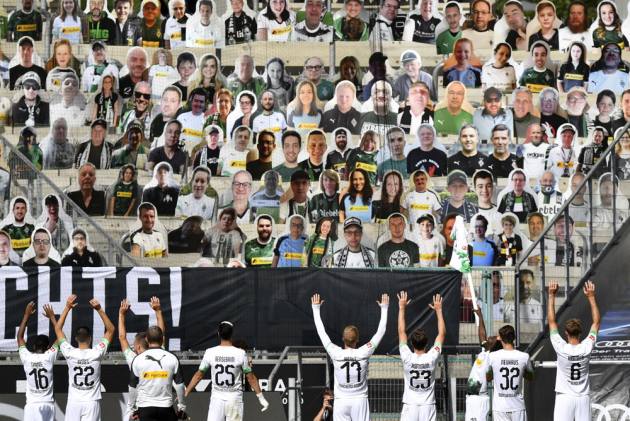 Borussia Monchengladbach propelled themselves into third place in the Bundesliga as Marcus Thuram struck twice, taking a knee in celebration, in a 4-1 demolition of Union Berlin. (More Football News)

Needing a victory to move above RB Leipzig and Bayer Leverkusen, Gladbach produced a dominant performance at Borussia-Park on Sunday - aside from one lapse in concentration.

Some shoddy marking from a set-piece gifted Sebastian Andersson a goal five minutes into the second half, as Union hauled themselves into contention following Florian Neuhaus' opener and a Thuram header.

Union's fightback was short-lived, though, with Thuram helping himself to a second before the hour and Alassane Plea on target late on as Gladbach moved back into the Champions League places.

Neuhaus tried his luck with an ambitious effort from inside his own half 13 minutes in, forcing Rafal Gikiewicz into a full-stretch stop, with Union's goalkeeper then denying Thuram.

Yet Gikiewicz was beaten in the 17th minute, Neuhaus shrugging off Marvin Friedrich before slotting a low finish in off the left-hand upright.

And Gladbach had their second four minutes before the break - Thuram heading in from Plea's precise cross and subsequently celebrating by taking a knee, likely in relation to tensions over perceived racism in the United States.

But Gladbach's lead was reduced in the 50th minute, Andersson on hand to nod home from Marcus Ingvartsen's fortuitous knockdown.

Patrick Herrmann looked set to restore the two-goal cushion a few moments later, only to drill an effort into the side netting under pressure from Keven Schlotterbeck.

Ramy Bensebaini went close with a free-kick, but Gladbach did not pass up their next opportunity - Plea again teeing up Thuram.

What does it mean? Pressure on RB Leipzig

It is incredibly tight in the race for the Champions League, and with Gladbach and Leverkusen both winning their matches this weekend, the onus will now be on Leipzig to defeat Cologne on Monday and get themselves back into pole position.

While Neuhaus was a standout performer in midfield, it was the double-act of Thuram and Plea which did the most damage, with the latter twice teeing up his strike partner before getting in on the act himself. With the duo firing on all cylinders, Gladbach stand a great chance of sealing a Champions League berth.

While Gladbach's attacking talents excelled at times, Marco Rose will be furious with the goal his side conceded early in the second half, with slack marking enabling Union to pull themselves back into the game.

A trip to Freiburg comes next for Gladbach, who are in action on Friday. Union do not play until two days later, when they face Schalke.