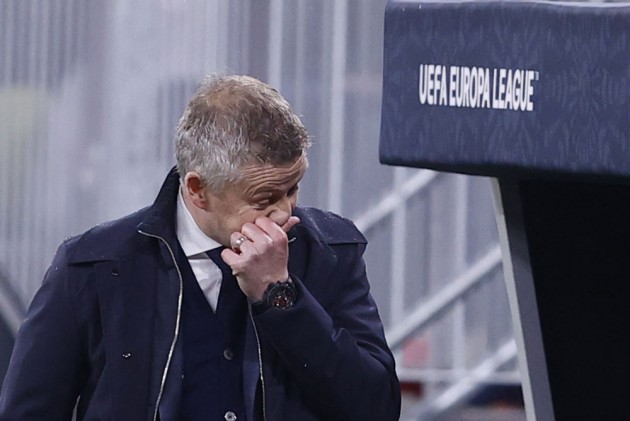 United lost 11-10 to Villarreal on penalties in Wednesday's decider in Gdansk after a 1-1 draw across 120 minutes – the Red Devils ending their 2020-21 season without a trophy.

Solskjaer's United have lost six of their last seven penalty shoot-outs in all competitions, only winning against Rochdale in the EFL Cup in September 2019 during that time.

Edinson Cavani – who cancelled out Gerard Moreno's first-half opener in the 55th minute – became just the third player aged 34 or above to score in a major European final for an English club, after Gary McAllister (36) for Liverpool in the UEFA Cup final against Deportivo Alaves in 2000-01 and Didier Drogba (34) for Chelsea in the Champions League final versus Bayern Munich in 2011-12.

Premier League giants United – who finished second behind neighbours Manchester City this term – have not won any silverware since 2017 and have been linked with a host of players to bolster their squad this off-season, including Tottenham star Harry Kane, Borussia Dortmund's Jadon Sancho and Villarreal centre-back Pau Torres.

"We've done as well as anyone could imagine," Solskjaer said during his post-game news conference. "We need to do better, we need to work better, harder, cleverer.

"Two or three players to strengthen the starting XI is important for us to go even further. I'm sure our contenders, challengers will also want to improve as well."

David de Gea's selection in the United XI was hotly debated, with competition from Dean Henderson – who played several of their late season Premier League matches.

Spain international De Gea was unable to make any saves during the shoot-out before seeing his own decisive penalty blocked by Villarreal goalkeeper Geronimo Rulli as the Yellow Submarine won their first major European title.

"You go through every scenario and it has crossed my mind in the build up to the game, but we were confident in David," Solskjaer said, when asked if he considered bringing on Henderson to replace de Gea for the shoot-out. "I stuck with the keeper that played all the games."

Solskjaer conceded United's 2020-21 season, which is now over, was not a success given they failed to win a trophy and implored his side to find the will to improve.

The Red Devils lost in the EFL Cup semi-finals and FA Cup quarter-finals, while they were eliminated in the Champions League group stage.

Solskjaer pinpointed United's start to the Premier League, collecting only seven points from their first six games, as an area for improvement next term.

"That disappointment is the worst feeling," he said. "These are the moments you remember most.

"There are two ways, you can feel sorry for yourself or you can do something about it and come back stronger.

"We know that we didn't start this season great. We fell behind, too far behind. We need to start really well."