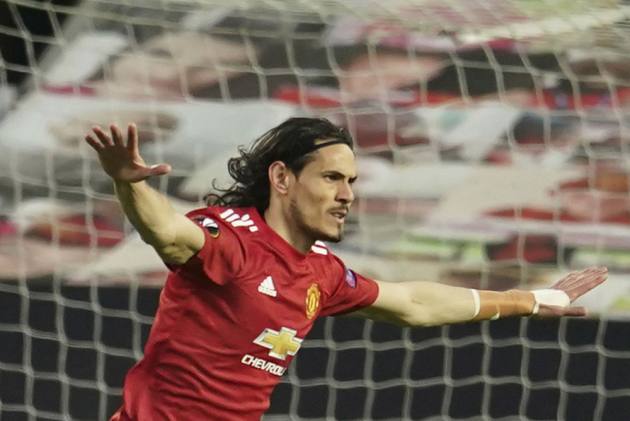 Cavani's milestone strike, and his first in Europe for United, was an expertly controlled volley into the bottom-right corner after six minutes at Old Trafford.

Yangel Herrera – on loan from United's rivals Manchester City – could have cancelled out United's lead on the night, while Cavani missed a great chance to add further gloss in the second half.

Donny van de Beek was then inches away from his first United goal since September, though the misses mattered little as United eventually got their second in the 90th minute, Jesus Vallejo heading into his own net as a semi-final clash with Roma was confirmed.

11 - Edinson Cavani has scored in European competition for the 11th consecutive season, with this being his first goal in the UEFA Europa League since December 2012 (for Napoli v PSV). Permanent. pic.twitter.com/mbsGhcsXRm

United wasted no time in extending their advantage in the tie – Cavani firing home from Paul Pogba's flick.

Herrera could have restored parity within two minutes, only to head wide from close range, and the Granada attacker squandered a similar opportunity in the 20th minute.

His second opportunity came from a free-kick conceded by Pogba, whose earlier booking for a foul on German Sanchez had made him something of a target for Granada, and the Frenchman was sensibly taken off at half-time.

Jorge Molina was the next to test United's resolve but headed straight at David de Gea, before Pogba's replacement Van de Beek centred for Mason Greenwood, who was unable to direct a looping header beyond Rui Silva.

Cavani could only get a shoulder to Bruno Fernandes' delightful cross, with Van de Beek then arrowing a foot wide from distance.

German dragged wide from inside United's area soon after – just another missed opportunity which Granada were left to rue as Vallejo's late own goal compounded their exit.

What does it mean? Liverpool's record in United's sight

United are into their 18th semi-final in all European competitions – only Liverpool (19) have appeared in more among English sides.

The Red Devils fell to eventual winners Sevilla at the last-four stage last season, and they will be determined to go one better against Roma, who just about overcame Ajax.

Half-century up for Cavani

Cavani has now scored in European competition for the 11th consecutive season, with this being his first goal in the Europa League since December 2012 (for Napoli v PSV).

It was a landmark 50th goal in UEFA competition for the striker and once again proved his importance to United as rumours circulate over his future.

No risks taken with Pogba

Perhaps scarred by the repercussions of not taking Fred off while on a booking as United suffered a damaging defeat to Paris Saint-Germain, Ole Gunnar Solskjaer took no gamble with Pogba's ability to avoid a second yellow.

Pogba's flick-on for Cavani's strike was an exceptional one, and from a free role on the left the France star created two chances and registered 51 touches. However, he also conceded three fouls, and it was just not worth the risk to keep him on.

- United have won three consecutive knockout stage games without conceding in major European competition for the first time since April 2008.
- Granada have lost their last three matches in the Europa League, having lost just two of their first nine in the competition (W5 D2 L2).
- Since losing their first two home games in the Europa League in the 2011-12 season, United have gone unbeaten in their last 17 games at Old Trafford in the competition (W13 D4).
- United have kept five clean sheets in six Europa League games since the turn of the year, more than any other side in 2021.
- Cavani (34y 60d) became the oldest United player to score in a knockout game in European competition since Zlatan Ibrahimovic against Saint-Etienne in February 2017 (35y 136d).
- Pogba has provided three assists in his last four games in all competitions, as many as in his previous 51 combined.

United are at Old Trafford again on Sunday, hosting Burnley, while Granada are not back in LaLiga action until they face Eibar on April 22.