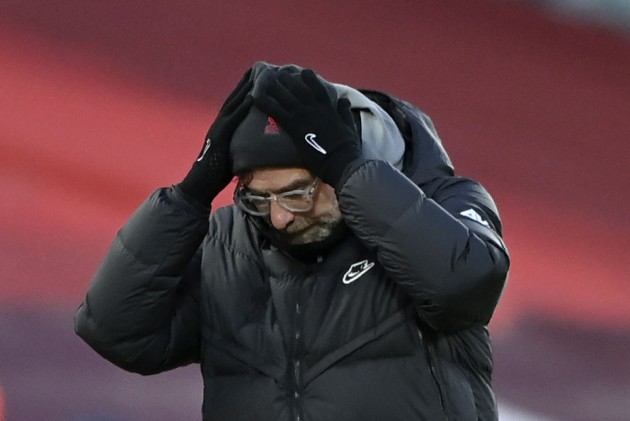 Jurgen Klopp claims Manchester City could not have won the Premier League had they endured the same sort of injury crisis Liverpool have, and says clinching a top-four spot will mean as much as winning a trophy. (More Football News)

Liverpool ended a 30-year wait for top-flight glory in memorable fashion during the heavily disrupted 2019-20 campaign but it has been a disappointing title defence.

The Reds have been blighted by injury issues, particularly at centre-back where Virgil van Dijk and Joe Gomez each sustained season-ending injuries and Joel Matip has missed large chunks of the campaign.

Liverpool's struggles were highlighted by a record run of six consecutive home league defeats between January and March, leaving thoughts of Champions League football next term looking fanciful at best.

But since the last of those, a 1-0 loss to relegated Fulham, the Reds have won seven and drawn two in the Premier League and three points against Crystal on Sunday will likely be enough to finish fourth – although an unlikely scenario whereby Chelsea and Leicester City each win and the latter manage to overtake Liverpool on goal difference could scupper that.

Klopp paid tribute to the character of his side and is convinced even Pep Guardiola's runaway champions would have faltered in similar circumstances.

"This year, with the amount of injuries we have had, it was not the year to become champions. No chance. For nobody," Klopp said.

"Sometimes we suffer things, we don't have a lot of influence on that. That's why things go the wrong way but I never question the character or the mentality of this team."

Take a look back at our best bits against @CPFC at Anfield last season pic.twitter.com/cNElqF4WUp

Klopp has delivered Champions League and Premier League glory to Anfield during his time at the helm but says the possible top-four achievement, a significantly more modest accomplishment on paper, will mean just as much given the context.

"Look, I don't know in how many years, but we will look back at our time here and this season is part of our story and our history, definitely," he added.

"Yes, it means as much to me [as winning a trophy], definitely. It is clear we wouldn't come to this situation if the boys wouldn't have shown this kind of character. They have very special character.

"For a long time it looked like this would not be a year they will talk a lot about in the future. 'Okay, that happened and then rest...forget it'. But the boys still did something really special, I have to say. Really special.

"It was a tough one, it is a tough one – losing all of our centre-halves, we broke our leg.

"We never blamed each other or pointed a finger at each other and said 'it is because of you or you'. We didn't get distracted. We always knew, we came here together, we go through this together and we will get stronger because of it.

"We have to show that next year obviously in the new season, but we will give it a proper try to use all the experiences from this year as well."