Pep Guardiola: Manchester City Will Give Liverpool The Guard Of Honour They Deserve 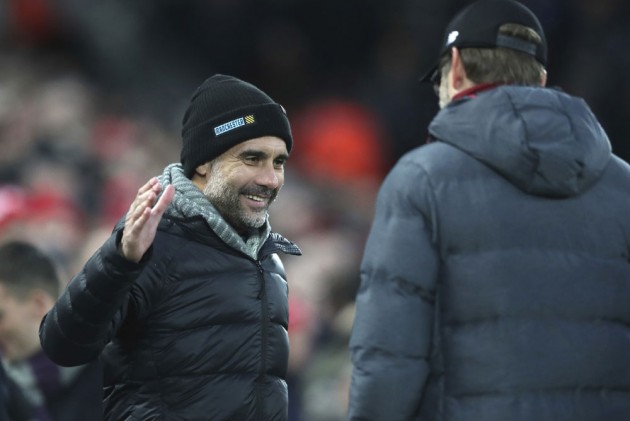 Manchester City manager Pep Guardiola has confirmed his team will give Liverpool a guard of honour when they face the newly crowned Premier League champions at the Etihad Stadium next week. (More Football News)

The developing rivalry between City and Liverpool has featured moments of simmering tension over the recent seasons.

The visiting team bus was attacked with missiles before Liverpool recorded a resounding Champions League quarter-final win at Anfield in 2018, while the sides took last year's title race to the wire – Guardiola's men prevailing by 98 points to 97.

Yet the Catalan insisted it is only right that he and his players applaud their rivals, to pay respect to what Jurgen Klopp and his all-conquering squad have achieved.

"We are going to do the guard of honour, of course," he said.

"Always we receive Liverpool, when they came to our house, in an incredible way. They cannot complain.

"Of course we are going to do it because they deserve it."

Congrats to all @LFC players and staff on winning the @premierleague. Well-deserved. https://t.co/Po64SSN9b3

Guardiola noted Liverpool's hunger to end a 30-year wait for a top-flight crown, saying they played every match as if it was "their last".

The ex-Barcelona boss is confident he knows why City came up well short in their bid for three in a row but balked at questions over the hunger of a team that has won six of the past eight major honours on offer in English football.

"I did not say [City played] without passion. Don't put words I didn't say," he said, bristling at the suggestion.

"I don't know the passion from Liverpool. I guess, I imagine what happened, when you are three-zero years without winning the Premier League, after winning the Champions League you are focused on that.

"But I didn't say this. Because a team that wins eight titles (including the 2018 and 2019 Community Shields) has passion. In every single game, every single competition. No one in this country can say that [City don't have passion].

"It is so difficult what we have done in the most difficult league by far in the world.

"In sport you have to live for the future, the next, but you have to have a little bit, one eye, on what we have done.

"Don't forget we are an incredible club and an incredible organisation. What we have to do is learn. I think we know the reason why we suffered this season and we're going to try to solve it next season."

The next focus... Sunday in the #FACup

Next up for City is a trip to Newcastle United in the quarter-finals of the FA Cup – one of two pieces of silverware they can add to this season's EFL Cup, with a long-awaited Champions League return against Real Madrid to come in August.

Goals from Gabriel Jesus and Kevin De Bruyne established a 2-1 advantage over Zinedine Zidane's men at the Santiago Bernabeu back in February.

"Of course, we have a big challenge for these two titles," Guardiola added.

"We fought for the Carabao Cup with the way we played and won the Community Shield against the champions of Europe.

"We are going to try at Newcastle to win and prepare for the last games of the Premier League, and arrive in the best conditions possible for Madrid."