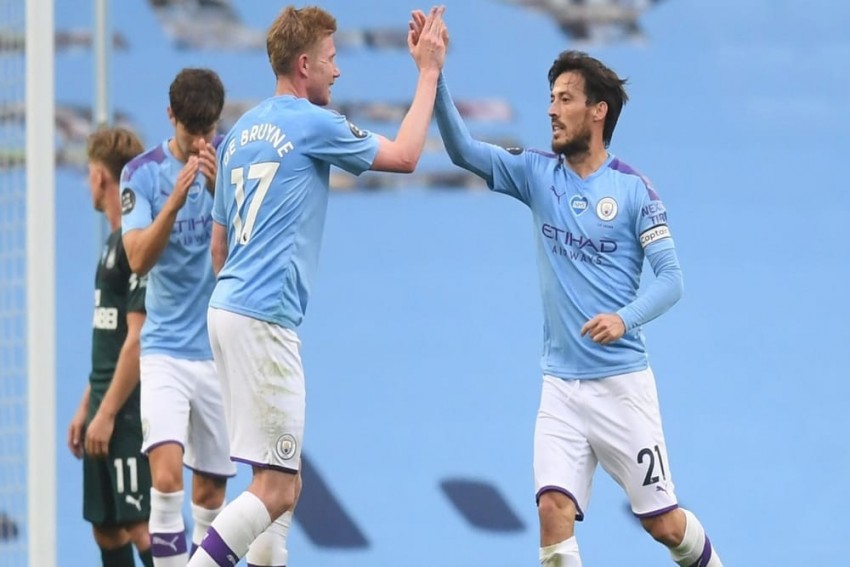 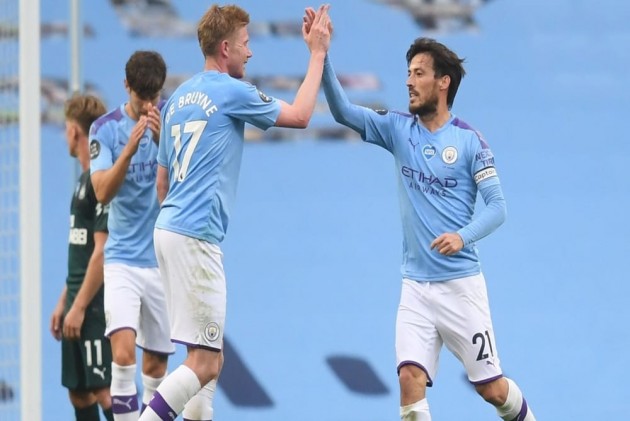 Manchester City put their defeat to Southampton behind them with a comprehensive 5-0 home victory over Newcastle United on Wednesday.

The 1-0 loss at St Mary's Stadium was City's ninth of the Premier League season and left them a demoralising 23 points behind new champions Liverpool at the top.

That gap was closed back to 20 - while the distance to Chelsea in third was stretched to nine - as Pep Guardiola's side brushed aside Newcastle through goals from Gabriel Jesus, Riyad Mahrez, David Silva, Raheem Sterling and a Federico Fernandez own goal.

Newcastle were happy to cede possession and keep their defensive block in place, but the game plan was undone just 10 minutes in when Jesus finished from Silva's cut-back after some slack marking.

The visitors were unable to cope with City's high press and, when they lost the ball again 35 yards out, De Bruyne ran onto Phil Foden's simple pass and squared for Mahrez to side-foot home.

That goal meant City became the first team to have five players hit 10 goals in a single Premier League season and there should have been another when Jonjo Shelvey gave up possession but Foden shot wide.

Foden somehow prodded wide with the goal gaping soon after the restart, but City had only to wait until the 58th minute for their third goal, Matt Ritchie kicking the ball in off Fernandez while trying to stop Jesus.

Silva made it 4-0 with a precise free-kick from 25 yards out, the disjointed Newcastle wall summing up the Magpies' scant overall resistance, and the Spaniard set up substitute Sterling for a simple fifth after intercepting a pass.

10+ - Manchester City are the first English top-flight side to have five different players score at least 10 league goals in a single season since Everton in 1984-85. Apportion. pic.twitter.com/Y6XzpL2bTS

What does it mean? City consolidate second... and wonder why

City's latest goalscoring record took them to 86 in the league this season, 14 more than leaders Liverpool, but did little more than make finishing second almost certain.

The kind of attacking interplay and unshakeable dominance of the game against Newcastle only adds to the bemusement as to how they have lost nine times and let Jurgen Klopp's side have such a simple time of things in the title race.

It was a first league loss for Steve Bruce's side since February 22, keeping them six points outside of the top eight but comfortably 16 clear of the drop zone.

Silva reached 10 assists in all competitions and scored a sublime goal to cap a typically creative, stylish performance. Surprisingly, it was the first time he had scored and set up a goal in a league match since January 2016.

He has just two more home league games to come as a City player. It is a shame they will be held without the crowd ovation he deserves.

Newcastle's 4-5-1 shape was never likely to work if the players were so quick to lose focus. The first-half goals both came from the position Emil Krafth should have been occupying, although he was given next to no protection out wide by DeAndre Yedlin and Valentino Lazaro.

93.7 - Manchester City completed 93.7% of their passes against Newcastle (787/840), the highest recorded figure in a Premier League game since full passing data is available (2003-04). Pollock. pic.twitter.com/RDlj2DRUjS

- Manchester City have won 11 consecutive top-flight home games against a single opponent for the very first time in the club's history.
- Newcastle United boss Steve Bruce has failed to win any of his 23 Premier League away games in Manchester (D4 L19), with this his ninth such defeat against City (10 v United).
- Thanks to Riyad Mahrez's strike, Manchester City are the first English top-flight side to have five different players score at least 10 league goals in a single season since Everton in 1984-85 (Raheem Sterling, Kevin De Bruyne, Sergio Aguero, Gabriel Jesus, Mahrez).
- De Bruyne has assisted 18 Premier League goals this season for City, the most by any player in a season in the division since the Belgian himself also set up 18 in 2016-17.
- David Silva has now reached 10+ assists in all competitions in all 10 of his seasons with Manchester City, with his second in this game his 121st in total for the club.
- City have now won 30 of the 31 Premier League matches when Jesus has scored, drawing the other.

City head to Brighton and Hove Albion on Saturday, the same day Newcastle face a Watford side still fighting for Premier League survival.