PSG star Kylian Mbappe reached 100 Ligue 1 goals as they went top with a thumping win over Lyon, but his night was ended early by injury 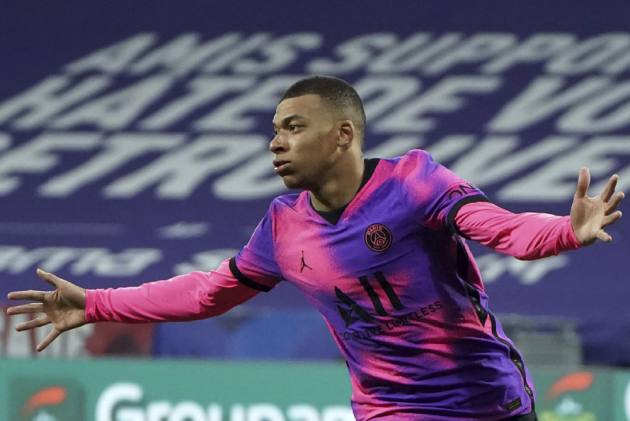 Kylian Mbappe reached 100 Ligue 1 goals but suffered an injury as Paris Saint-Germain surged to the top of the table with a 4-2 win at fellow title challengers Lyon. (More Football News)

The defending champions went into the game knowing they could overhaul Lille at the summit with a victory following Les Dogues' shock 2-1 home loss to Nimes earlier on Sunday.

And they made no mistake in taking advantage of that slip-up, the instrumental Mbappe opening the scoring in the 15th minute and Danilo Pereira doubling the lead 17 minutes later.

Angel Di Maria, whose house was burgled during PSG's defeat to Nantes last week, made it 3-0 shortly after the restart before Mbappe brought up his hundred at the end of a rapid counter-attack.

Mbappe limped off in the second half and was replaced by the returning Neymar in between consolation goals from Islam Slimani and Maxwel Cornet, putting the France star's participation in the upcoming World Cup qualifiers in question.

PSG should have been ahead in the sixth minute following tremendous work down the left from Mbappe, who outpaced a pair of defenders and produced a pinpoint cross only to see Moise Kean shoot straight at Anthony Lopes.

Mbappe took it upon himself to do what Kean could not, beating Lopes by rifling through his legs at the near post after the Lyon goalkeeper could only parry Marco Verratti's shot.

Kean forced Lopes into action again with an effort from the edge of the box and Angel Di Maria blazed over after a perfectly weighted pass from Mbappe.

But the second that PSG's dominant start warranted arrived in superb fashion.

Lyon failed to clear a corner and Marquinhos met Presnel Kimpembe's chipped pass with a cushioned header down into the path of Danilo, who rattled a first-time effort into the bottom-left corner.

And the hosts were given a mountain to climb a minute and 45 seconds into the second half as Di Maria's inswinging free-kick found its way through a mass of bodies in the box and beyond a stricken Lopes.

Fewer than five minutes later Mbappe moved into three figures in typical fashion, racing on to Verratti's delicate ball over the top and dispatching a confident finish.

Substitute Slimani reduced the arrears with a fierce strike from outside the area and, after Neymar took Mbappe's place in attack, Cornet capitalised on some slack PSG defending to make the finish more nervous than it had any right to be.

What does it mean? - PSG take control of title race

PSG are level on points with Lille, but their vastly superior goal difference means it is they who now hold a familiar position at the summit.

Lyon are three points adrift, with Monaco a point further back, but Mauricio Pochettino will know their task is far from over, particularly after a sloppy finish to a contest they dominated.

Mbappe's landmark was just reward for an electric performance in which he ran the Lyon defence ragged. He played two key passes and hit the target with each of his three shots, his last seeing him denied a hat-trick by Lopes before he came off with an injury that will be of greater immediate concern to Didier Deschamps than to Pochettino.

Cornet will reflect on an up-and-down evening. It was his foul that gave away the free-kick from which Di Maria put PSG in complete command and he had the worst passing accuracy (70.6%) of any Lyon player. However, he did pounce on poor defending from Alessandro Florenzi to give Lyon a glimmer of hope.

The international break may be seen as serendipitous for PSG given Mbappe's knock. If he misses the qualifiers it will give him chance to rest for a huge clash with Lille on April 3, with the first leg of the Champions League quarter-final with Bayern Munich coming four days later.

Next up for Lyon is a trip to Lens after the break.