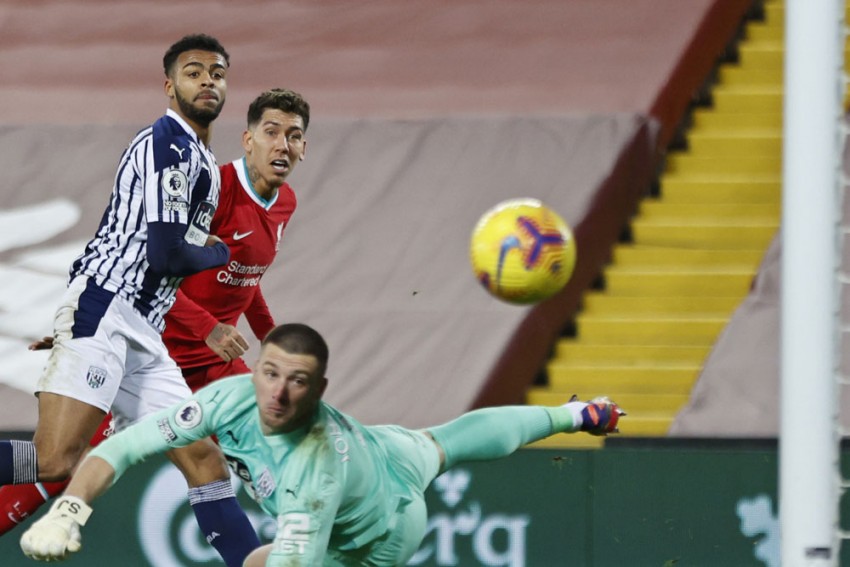 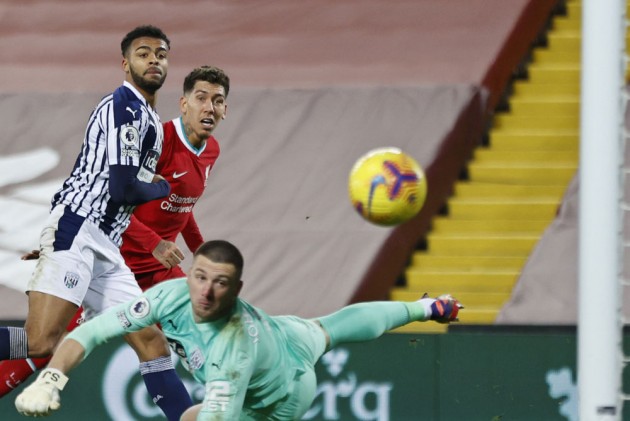 Semi Ajayi claimed another valuable point for West Brom in their survival fight as his 82nd-minute header snatched a 1-1 draw against Liverpool. (More Football News)

The centre-back's deflected shot - later credited as a Ruben Dias own goal - helped Albion to earn a share of the spoils at Manchester City earlier this month and his looping effort came off the post before spinning beyond a helpless Alisson at Anfield on Sunday.

Liverpool were dominant during the first half and should have had more than Sadio Mane's sublime finish to show for their efforts.

However, nerves set in and, after Joel Matip added to Jurgen Klopp's injury headache at centre-back, an increasingly emboldened West Brom drew level.

Sam Johnstone saved magnificently to keep out a Roberto Firimino header as Liverpool had to settle for extending their lead at the summit over Everton to three points.

6 - Liverpool have failed to win six of their 15 Premier League games this season (W9 D5 L1), as many as they did in the entirety of last season in the league (W32 D3 L3). Mortal. pic.twitter.com/RpAkpio5r9

West Brom were obligingly pegged back during the opening stages and Mane made the pressure tell with a fabulous piece of skill in the 12th minute. The Senegal international drifted away from Ajayi to control Matip's floated pass on his chest and steer a finish beyond Johnstone.

Darnell Furlong's long throws asked moderate questions of Liverpool early in the second period and they never looked completely secure after Matip pulled up with an apparent groin injury.

Liverpool did not heed the warning, however, and a sloppily conceded corner led to Ajayi converting from substitute Matheus Pereira's cross, albeit with a slight touch of fortune.

Johnstone had excelled himself to thwart Raheem Sterling and Ilkay Gundogan in stoppage time in the draw at the Etihad Stadium and Firmino became the keeper's latest victim, the Brazil star having done all he could to produce a dramatic winner.

What does it mean? Liverpool unable to pull away

A draw between Leicester City and Manchester United before more dropped points for Chelsea on Boxing Day, along with Manchester City's tough trips to Everton and Stamford Bridge on the horizon, meant the festive schedule looked made to measure for Liverpool.

Klopp's side could still boast a handsome lead at the summit by the time they finish their first game of 2021 at Southampton, but an unpredictable season seems to throw up further twists and turns just when the best teams appear to have settled into a rhythm.

No half measures for Semi

An unforgettable maiden Premier League goal was just reward for Ajayi, who played a full part in West Brom's dogged rearguard, making seven clearances and contesting the same number of aerial duels during the contest.

Allardyce sets the template for Albion

The former England boss has wasted little time in fashioning a team in his image. At times during the first half, it felt like an embattled defence were organising their line inside the deserted Anfield Road Stand. By the interval, West Brom had managed two shots in three halves under Allardyce, while their 46 passes were the joint-second fewest by a Premier League team in the first half of a game this season, with only bottom club Sheffield United being less productive.

Stretching his personal unbeaten run at Anfield to four matches is validation for now, but it remains to be seen whether such tactics will be enough for an Albion side still five points from safety.

5 - Five of the last six goals Sam Allardyce's teams have scored at Anfield in the Premier League have been scored in the final 20 minutes of play. Sting. pic.twitter.com/iywoKD5UqK

Key Opta facts
- Liverpool failed to win for only the second time in their past 34 home league games (W32 D2), also drawing 1-1 with Burnley in July.
- Allardyce is unbeaten in four Premier League games at Anfield (W1 D3), all coming while in charge of a different club (Sunderland, Crystal Palace and Everton before West Brom).
- This was the first time Liverpool failed to win a home league game against a side starting the day in the relegation zone despite taking the lead since a 2-2 draw with West Ham in December 2016.
- Mane scored his 69th league goal for Liverpool, moving him level with Luis Suarez and behind only Robbie Fowler (128), Steven Gerrard (120), Michael Owen (118) and Mohamed Salah (86).
- Among defenders since the start of the 2018-19 season, only Virgil van Dijk and Aaron Pierre (both nine) have scored more headed league goals in England's top four tiers than Ajayi (eight)

Another exercise of attack vs defence could be on the cards when Klopp takes his team to Newcastle United on Wednesday, with West Brom's game against Marcelo Bielsa's Leeds United a day earlier promising a similarly sharp contrast in styles.