India endured mixed results as medal eluded the country on Day 3. Catch highlights and updates of Indians competing on day 3 at Tokyo 2020 here

Dark clouds hovered over India on Sunday after silver lining provided by Mirabai Chanu's historic weightlifting silver on Saturday. Apart from PV Sindhu, MC Mary Kom and Manika Batra winning their league matches, India had little to cheer about. Medal hopes vanished when Manu Bhaker’s gun developed a snag, while Yashaswini Singh Deswal failed to make the cut in 10m air pistol. Deepak Kumar and Divyansh Singh Panwar faltered in men’s 10m air rifle. Swimming saw both Srihari Nataraj and Maana Patel failing to qualify. But the shocker was reserved for the end of the day as India’s men’s hockey team were thrashed 1-7 by Australia. Follow highlights of Day 3 here:

Congratulations @mirabai_chanu . Emotional and happy to embrace each other. A proud Manipuri and a fighter for India in one frame. @NBirenSingh pic.twitter.com/5qrfbDervF

That's it folks, India have been completely outplayed. India now must get ready to face Spain their next match

4th  Quarter: India 1-7 Australia.  Australia are now piling on misery, India have now no chance of even making a comeback in this match.

Australia have outclassed India and with just last quarter to go, India will be looking to minimise the damage.

Australia are now scoring goals at will. The sixth goal came of penalty corner conversion through Blake Govers. Govers also scored through penalty stroke. Three minutes to go in the third quarter and India are now completely running out of ideas.

3:45 PM IST:  Swimming: Australia claimed a third straight gold in the women's 4x100-metre freestyle relay in world-record time at the Olympics on Sunday.

Chastening! Aussies have killed the contest in the first half. India will need a miracle. Even a green card, not the popular one though, for Dilpreet Singh.

And Joshua Beltz produces a stunning reverse flick to make it 4-0 for the Aussies with four minutes left in the quarter.

Aussies doubled the lead with a conversion from a penalty corner. Brilliant drag flick from Jeremy Thomas Hayward.

And within seconds, made it 3-0 by Flynn Andrew Ogilvie with a brilliant field goal. And the quarter still has more than seven minutes left.

James Daniel Beale gave Australia the lead. India looked for a strong finish but, the Aussies were effectively good in defence too.

India's line-up revealed. Have a look

Indian team arrives for the clash against Australia. 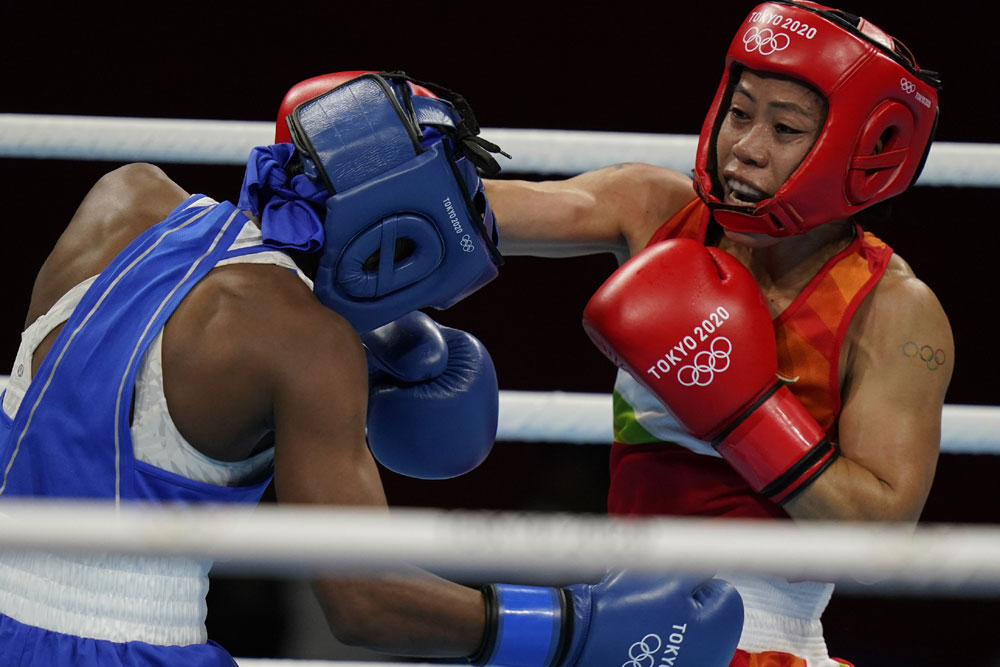 Even with the lead, Mary Kom going for the broke. She's not taking any chance. And the referee warns Miguelina Garcia not to hold. More connections from Mary Kom. This is a masterclass from the legend.

Mary Kom is showing her experience. A couple of connections with her right. Her opponent from the Dominican Republic is doing all the attacking, though. But not necessarily landing. And another 3-2, in Mary's favour.

Up against 15-years  her junior, Mary Kom is taking blows as she tries to measure Miguelina Garcia's reach in the opener. 3-2 in favour of Mary Kom. 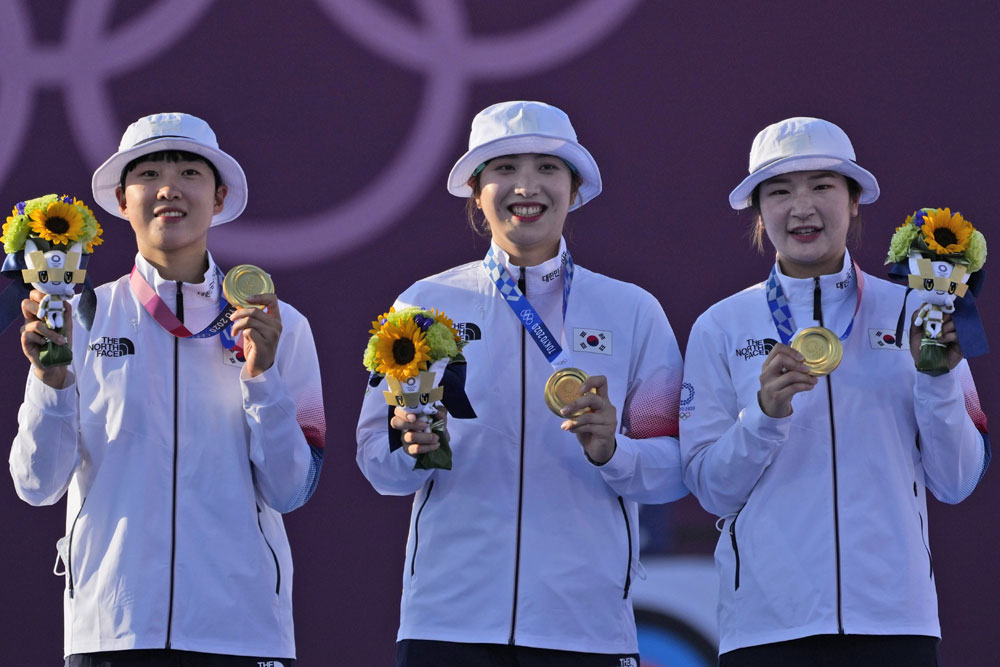 Manika Batra wins the 6th game 11-5 to force the decider against Margaryta Pesotska of Ukraine.

Coming up! MC Mary Kom, 38, starts her campaign against 23-year-old Miguelina Garcia of the Dominican Republic.

Manika Batra fights back to draw level with her Ukrainian rival, Margaryta Pesotska. It's 2-2 now.

Up next is Manika Batra, in her women's singles second round match.

Softball: Australia 1 United States 2 in an extra-inning contest, with Monica Abbott (USA) striking out 13 in a complete-game 8-inning effort.

Basketball: Competition is underway, with the Czech Republic beating Iran 84–78 in the men's opening game.

Beach volleyball: Evandro Goncalves/Bruno Oscar Schmidt of Brazil opened with a 2–1 win over Chile's Marco and Esteban Grimalt, after dropping the middle set.

Canoe slalom: Competition has begun with the heats. Slovenia's Benjamin Savsek leads the men's after the first run with a total time of 98.82.

Hockey: After defending champions Great Britain lost in women's Pool A to Germany, Australia and New Zealand each recorded victories in Pool B, 3–1 over Spain and 3–0 over Argentina respectively.

Volleyball: There were wins for both U.S. teams today, the men beating France and the women over Argentina, in straight sets.

G Sathiyan loses the fifth game 9-11 to Lam Siu Hang of Hong Kong. Now, it's 3-2 in favour of the Indian player.

G Sathiyan makes it 2-1 with an 11-4 win in the third game against Lam Siu Hang of Hong Kong.

G Sathiyan fights back to win the second game, 11-7 after losing the first 7-11 to Lam Siu Hang of Hong Kong.

After round 2, Angad Vir Singh and Mairaj Ahmad Khan are placed 9th and 14th respectively. Top six make the final after the two-day qualification.

Sania Mirza and Ankita Raina lose the second set 6(0)-7 in 58 minutes as Ukraine's Liudmyla and Nadiia Kichenok make a resounding comeback to force the decider.

Defending champion Andy Murray is being replaced by Max Purcell of Australia vs against Canada's Felix Auger-Aliassime.

In a statement released by Team GB, Murray said:

“I am really disappointed at having to withdraw but the medical staff have advised me against playing in both events, so I have made the difficult decision to withdraw from the singles and focus on playing doubles with Joe [Salisbury].”

The Briton, however, remains in the doubles draw.

Russian Vitaina Batsarashkina (ROC) sets a new Olympic record to win gold with a score of 240.3 points, ahead of Antoaneta Kostadinova of Bulgaria and China's Jiang Ranxin.

Aussies destroy the field to claim the gold ahead of Canada and USA. Bronte Campbell, Meg Harris, Emma McKeon and Cate Campbell clocked 3:29.69 to better their own 3:30.05 (April, 2018). 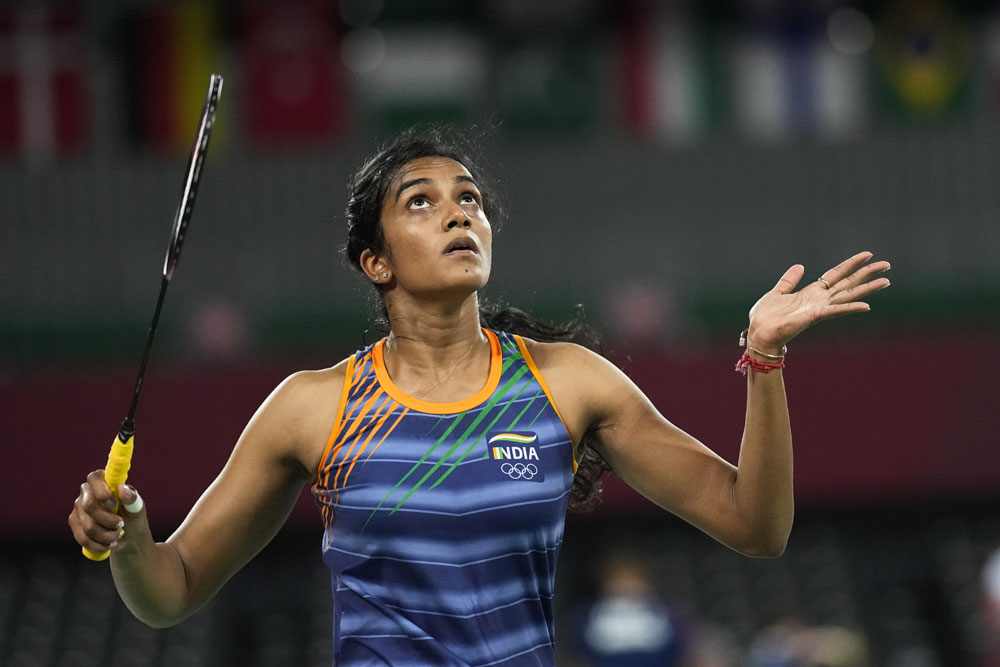 PV Sindhu opens her campaign with an easy outing against Ksenia Polikarpova of Isreal. It takes just 28 minutes for the sixth-seeded Indian to win the match in straight games (21-7, 21-10).

1-2 for USA as Kalisz Chase and Jay Litherland take gold and silver. Bronze for Brendon Smith of Australia.

Coming up - PV Singhu vs Ksenia Polikarpova of Isreal

Indian pair of Arjun Lal and Arvind Singh finishes third in Repechage 2 and makes it to Semifinal B.

Series 6 - Another shocker from the shooting range. Both Manu Bhaker and Yashaswini Singh Deswal fail to qualify for the final, after finishing 12th and 13th respectively. Both manage only 95s in the final round for 575 and 574 points. Meanwhile, China's Jiang Ranxin creates a new Olympic qualification record with grand total of 587. 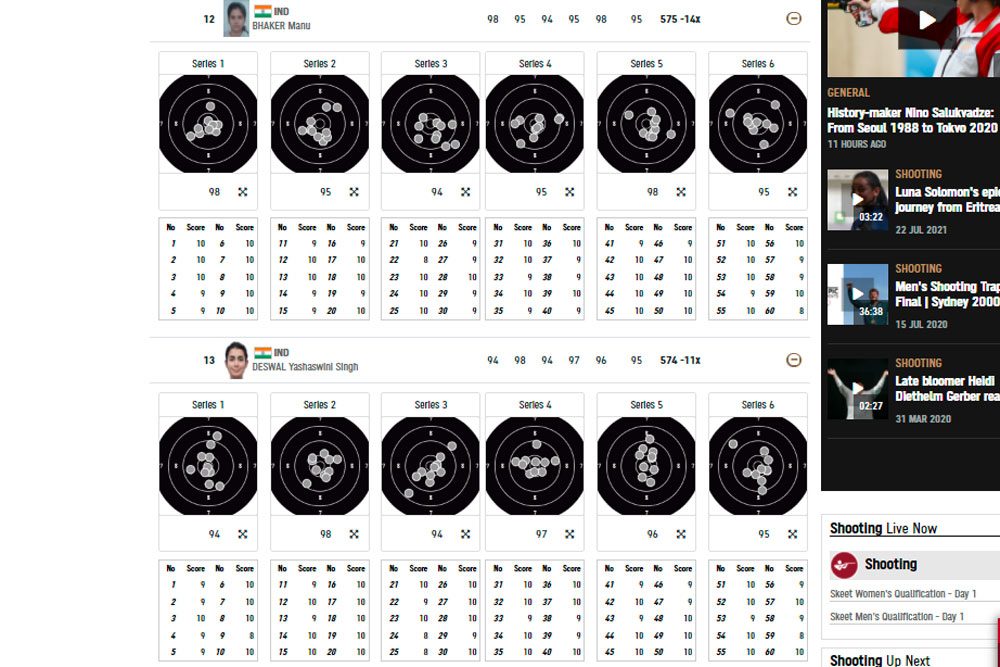 Arjun Lal and Arvind Singh are in repechage action now.

Series 5 - Another sensational round from Yashaswini Singh Deswal. She shoots 98 with eight 10s. But underwhelming performance from Manu Bhaker. She manages on 96. Do or die time for both in the final series. Top eight make to the final.

Series 2 - Manu Bhaker manages 95, while Yashaswini Singh Deswal gets 98 with a series of 10s in the last seven shots.

Coming up - Arjun Lal and Arvind Singh will feature in Repechage 2. They will be in lane 5.

Series 2 - Not the best of shooting from the two Indian shooters in qualification. Manu Bhaker is shooting 9s in the second series - so far four out of six; while two 9s for Yashaswini Singh Deswal.

Coming up - Mairaj Ahmad Khan and Angad Vir Singh will be in action.

5:05 AM IST: Medals to be decided on Big Sunday

The senior-most member of India's Olympic contingent -- 48-year-old skeet shooter Mairaj Ahmed Khan -- and one of the youngest -- 19-year-old air pistol shooter Manu Bhaker -- will start their Tokyo 2020 respective campaigns on Sunday. After a poor opening day at the Asaka Shooting range on Saturday, where the fancied Elavenil Valarivan and Saurabh Chaudhary drew a blank, much will be expected from Manu Bhaker and Yashaswini Deswal in10m air pistol. Should they cross the qualification barrier, the duo will be top medal contenders and the first good news of the day can come as early as 9 AM IST!

PV Sindhu will be back in competitive action after more than a year. She has a fairly easy group but upsets can't be ruled out. Advancing from her group will be key. Sindhu plays Israel's Ksenia Polikarpova. The Rio 2016 silver medallist has admitted all games will be tough and the absence of injured defending champion Carolina Marin is no big advantage.

Talking of advantage MC Mary Kom, almost certainly in her last Olympics, will leave nothing to chance in her opening bout against Dominican Republic's Miguelina Garcia Hernandez in 51 kg class. Manish Kaushik will also begin his campaign in the 63 kg division.

Sania Mirza and Ankita Raina will team up for women's tennis doubles while Manika Batra will like to keep her singles campaign going in Round 2. Focus will also be on India's sailors Nethra Kumanan and Vishnu Saravanan. The Indian men's hockey team play world champions Australia in a group match after making a winning start against New Zealand.

All in all, an interesting Sunday!