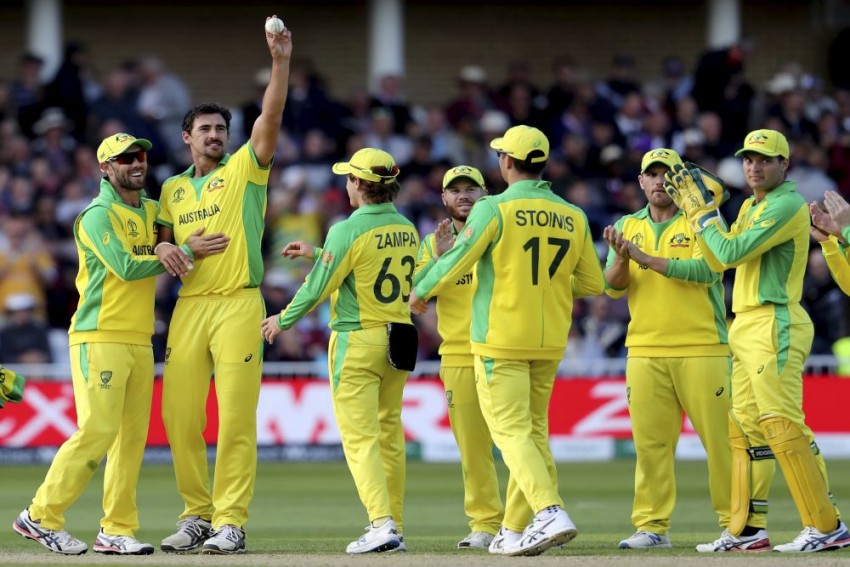 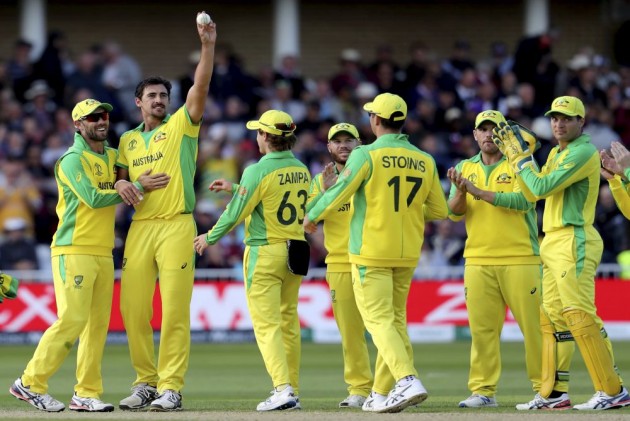 Australia defeated West Indies by 15 runs in a ICC Cricket World Cup 2019 fixture at Trent Bridge, Nottingham on Thursday. Asked to bat first, Australia lost half their side inside the first 20 overs but Nathan Coulter-Nile's 60-ball 92 and Steve Smith's 73 propelled the defending champions to 288. In reply, the Windies lost wickets at crucial intervals and were restricted to 273/9. Mitchell Starc, who took five wickets, became the fastest to 150 ODI scalps. Get highlights and match report of the Australia Vs West Indies encounter here (MATCH REPORT | SCORECARD | POINTS TABLE | FULL SCHEDULE)

Nathan Coulter-Nile, Man of the Match: "No. I did not think I would get that much. I remember Smith being on 81 and me not hanging around in a practice game, so I thought I would stick around a little bit. Played a pull shot second ball and it went up, luck went my way - couple dropped safely and inside edged a few. That's the way cricket goes. We back ourselves, we got two world class bowlers and Zamps. We back ourselves to defend anything."

23:02 hrs IST: That's it. Australia win by 15 runs, their second consecutive victory in the tournament.

22:43 hrs IST: DOUBLE-STRIKE! Starc gets Brathwaite and Holder in the space of six balls, becomes the fastest to 150 ODI wickets. Good decision by Finch to go with his main bowler. West Indies are 252/8 after 46 overs, need 37 off 24.

22:32 hrs IST: SIX! Bouncer from NCN and Brathwaite muscles it over mid-wicket for a maximum. Also, Holder completes his fifty. Steady innings from the skipper. West Indies are 243/6, need 46 off 36.

22:11 hrs IST: OUT! Totally unecessary from Russell. Full delivery from Starc, the West Indian looks to hit it over mid-wicket but miscues and Maxwell runs back from point to complete a fine catch. Carlo Brathwaite comes to the crease. West Indies are 217/6, need 72 off 66.

21:47 hrs IST: Aaron Finch sticks with Glenn Maxwell. The all-rounder on with his sixth over. Jason Holder hits the first two balls for fours. Poor bowling from the Big Show. 10 runs from the over. West Indies are 188/4 after 34 overs.

21:43 hrs IST: Pat Cummins continues. Five runs from the over, including a four off the fifth ball. Shai Hope plays a well calculated shot to fine leg after shuffling his stance to meet to the bouncer. West Indies are 178/4 after 33 overs.

21:20 hrs IST: WICKET! Massive blow to Windies. Hetmyer, who was looking so good, is run-out. Sharp throw from Pat Cummins (from mid-off) and Maxwell does the rest. Jason Holder comes to the crease. West Indies are 151/4 after 28 overs.

21:05 hrs IST: FOUR! Fraction short from Zampa, Hope rocks back and smacks it in the gap between long-on and deep mid-wicket boundary. Costly over from the Australian, 10 runs off it. West Indies are 126/3 after 24 overs.

21:01 hrs IST: FOUR! Short delivery from Starc and Hetmyer pulls it through mid-wicket. Fast hands! West Indies are 116/3 after 23 overs.

20:43 hrs IST: FOUR! Another short ball, this time from Stoinis, and Hope pulls it in the gap between fine leg and deep square. West Indies are 99/2 after 19 overs.

20:40 hrs IST: FOUR! Touch short from Zampa, Hope goes back and punches it past the fielder at cover. First boundary after 52 balls. West Indies are 93/2 after 18 overs.

20:37 hrs IST: Pooran going well, but Hope still struggling a bit. Partnership worth 57 off 73 deliveries. Just what the doctor ordered for Windies after they lost their openers cheaply. West Indies are 88/2 after 17 overs. Pooran 39*, Hope 16*

19:47 hrs IST: OUT! And Gayle isn't third time lucky. Starc finally gets his man. Nicholas Pooran comes to the crease. West Indies are 31/2 after 5 overs. Cummins to continue. It was a no-ball. Should have been a free-hit. Starc clearly overstepped. Poor umpiring!

19:40 hrs IST: Pat Cummins on with his second over. A dot to Shai Hope, then a single. Chris Gayle then hits back-to-back fours. A couple, then a four. 15 runs from the over. Those couple of bad calls seems to have infuriated the Universe Boss. West Indies are 27/1 after four overs.

19:35 hrs IST: What an over! Chris Gayle is asking umpire, Chris Gaffaney, what have I done to you? First, a caught behind, which was not. Gayle was bowled, but bails remain stuck in the groove. Then a LBW, with the ball missing the leg stump by miles. Both times, Gayle took the review immediately, without consulting his partner. Such was his confidence. Five runs from Mitchell Starc's second over. West Indies are 12/1 after three overs.

19: 23 hrs IST: Mitchell Starc starts with the proceedings in the second half of the match. Chris Gayle faces the first ball, and five wides, down the leg. Two singles and four dots. Seven runs from the over. Target is 289. Evin Lewis is Gayle's opening partner.

18:33 hrs IST: Sheldon Cottrell returns. Huge applause for Chris Gayle, who stops a Nathan Coulter-Nile shot at short fine leg. Diving. And he acknowledges. A single, then Coulter-Nile hits a four and two successive sixes. Australia are 268/7 after 46 overs. 54 off the last five overs.

18:21 hrs IST: Ashley Nurse continues. Nathan Coulter-Nile is playing a blinder of an innings. He hits the spinner for a four off the first ball, to fine leg. A wide, the Shimron Hetmyer drops him at deep mid-wicket. A single off it. Three singles, a wide and a double from the remaining deliveries. 12 runs from the over. Australia are 245/6 after 44 overs.

18:17 hrs IST: Big over for Australia. 15 runs from Carlos Brathwaite's 8th, with Steve Smith and Nathan Coulter-Nile hitting a four and a six off the second and fifth balls respectively. Australia are 233/6 after 43 overs.

18:03 hrs IST: Russell struggling with his knee problem. He still has two overs left but it doesn't look like he'll be back. Windies will hope he's fit enough to bat. Australia are 202/6 after 39 overs.

17:51 hrs IST: FOUR! That's fifty for Smith. Needs to carry on and get a big one. Support from other end will be important here. Australia are 181/6 after 36 overs.

17:42 hrs IST: Couple of boundaries for Coulter-Nile. Moves into double-figures. Thomas proving to be expensive. Australia are 166/6 after 34 overs.

17:29 hrs IST: OUT! Edged and gone! Second scalp for Dre Russ. Windies X-Factor? Carey gone for 45(55). Nathan Coulter-Nile comes to the crease. Stupendous over, a wicket and two runs. Australia are 148/6 after 31 overs.

17:24 hrs IST: Andre Russell comes back into the attack. Can he strike?

17:21 hrs IST: Both batsmen nearing half-centuries. Has been a good recovery from Australia. Smith at No. 4 seems to be a great option. Will be crucial to his team's chances in the tournament. Australia are 146/5 after 30 overs. Time for drinks!

17:09 hrs IST: FOUR! Length ball from Holder and Carey drives on the rise through cover. Moves into 30s. Australia are 129/5 after 27 overs. Ashley Nurse comes into the attack.

16:36 hrs IST: The bouncer barrage from Thomas continues but Smith negotiates it well. Australia are 82/5 after 19 overs. One more wicket and the defending champs will find it tough to get past 180.

16:23 hrs IST: OUT! Short ball from Holder, Stoinis times the pull well but finds Nicholas Pooran at mid-wicket. Australia in all sorts of trouble now. Alex Carey comes to the crease. Steve Smith is the absolute key here. Windies need to find a way to get rid of him.

16:18 hrs IST: Impressive over from Holder, only three runs off it. Australia are 75/4 after 15 overs. This partnership has stabilised things a bit for the Aussies but a lot of work remains to be done.

16:04 hrs IST: FOUR! Length delivery from Brathwaite, outside off, Smith punches it away through point. Australia are 60/4 after 12 overs. Jason Holder comes into the attack.

15:59 hrs IST: FOUR! Full-toss from Russell and Smith hits it straight down the ground. Easy pickings! Australia are 54/4 after 11 overs. Brathwaite again.

15:54 hrs IST: FOUR! Short delivery from Brathwaite, Stoinis gets into position early and pulls it to deep backward square leg. Good over for Australia, eight runs off it. Australia are 48/4 after 10 overs.

15:49 hrs IST: Magnificent over from Russell, only two runs off it. Australia are 40/4 after 9 overs. Smith 4*, Stoinis 0*. Carlos Brathwaite comes into the attack.

15:44 hrs IST: OUT! Short-pitched bowling does it for Cottrell. Maxwell looks to pull but gets a top-edge and Hope takes his third catch of the match. Windies pacers on fire! Marcus Stoinis comes to the crease. Australia are 38/4 after 8 overs. Russell to continue.

15:38 hrs IST: OUT! And Russell joins the party, removes Khawaja who never looked comfortable at the crease. Remember, this was the same ground where Pakistan were bowled out for 105 against Jason Holder's side. Glenn Maxwell comes to the crease. Australia are 36/3 after 7 overs.

15:32 hrs IST: Cottrell continues to keep it tight. Australia are 33/2 after 6 overs. Khawaja 11*, Smith 2*. And here comes the first change in bowling. Andre Russell is into the attack.

15:28 hrs IST: FOUR! Short ball from Thomas, Khawaja shuffles and pulls it to fine leg for a boundary. Australia are 32/2 after 5 overs. Cottrell again.

15:23 hrs IST: Another tidy over from Cottrell, only four off it. And he gets the better of Warner, who hit an unbeaten 89 against Afghanistan. This is a superb start for West Indies. Australia are 26/2 ater 4 overs. Steve Smith comes to the crease.

15:17 hrs IST: Solid over from Thomas, a wicket and seven runs. Australia are 22/1 after 3 overs. Cottrell to continue.

15:12 hrs IST: OUT! Good length ball from Thomas, moves away off the pitch, Finch gets an outside edge and Hope does the rest. Excellent delivery! Usman Khawaja comes to the crease.

15:09 hrs IST: Decent start from Cottrell. Five runs off his first six deliveries. Australia are 15/0 after 2 overs. Thomas to continue.

15:05 hrs IST: Single off the last ball for Finch. Not the best of the starts for Thomas. Australia are 10/0 after the first over. Sheldon Cottrell comes into the attack.

15:02 hrs IST: FIVE WIDES! Thomas gets the line wrong, down the leg-side, wicket-keeper Shai Hope fails to collect and it goes to the boundary. Warner gets off the mark with a single off the next delivery.

14:33 hrs IST: West Indies have won the toss and have opted to field.

Aussie captain Aaron Finch: "I think if we are tentative and if we are a bit standoffish and wait for things to happen, that's when they can dominate you from the start. It's important that you turn up with the right attitude and the right intent in the first 10 overs, bat or ball."

14:15 hrs IST: Chris Gayle has scored at least a half-century in six consecutive ODIs. Only one batsman, Javed Miandad, has ever put together a longer run (nine).

13:58 hrs IST: BIG NUMBER - Mitchell Starc is four wickets away from becoming only the 10th bowler to pick up 150 ODI scalps for Australia.

13:55 hrs IST: STAT ATTACK - Australia have won nine of their last 10 ODIs against West Indies, although the teams have not met in the 50-over format since 2016.

13:49 hrs IST: Hello and welcome to Outlook's live coverage of the 2019 Cricket World Cup match between Australia and West Indies.

In previous matches of the ICC Cricket World Cup 2019, Australia limited Afghanistan to 207 in Bristol, before cruising home by seven wickets on the back of David Warner's unbeaten 89 and a fluent 66 from skipper Aaron Finch. The Windies, on the other hand, skittled out Pakistan for 105 before sealing the deal by seven wickets.

Australia were subjected to a humiliating 242-run thrashing in Nottingham 12 months ago as England racked up a record ODI total of 481-6. However, a much-changed Australia line-up will be confident of ensuring a different outcome today.

Australia are set to be field an unchanged XI. For West Indies, Andre Russell is a doubtful starter after a recurring knee problem flared up in the clash against Pakistan.