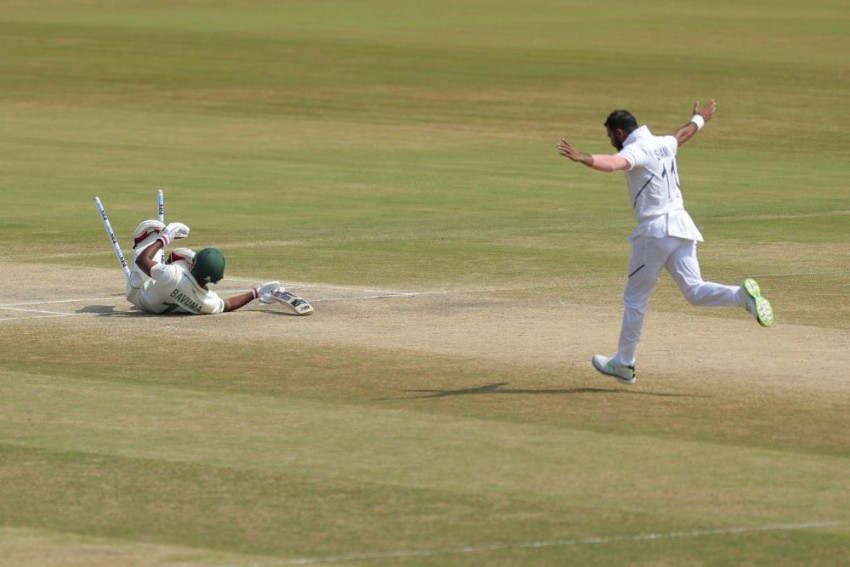 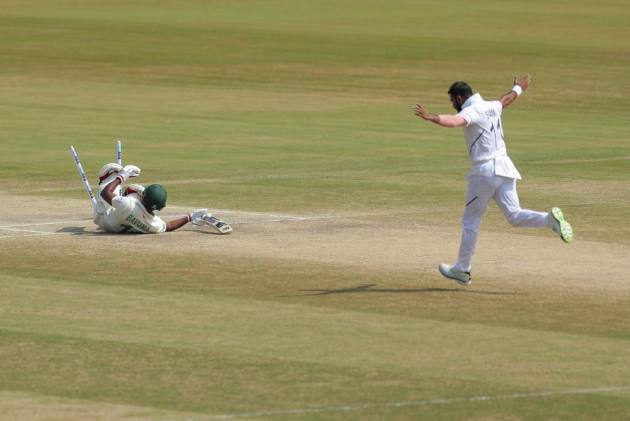 India defeated South Africa by 203 runs on the fifth and final day of the first Test in Visakhapatnam on Sunday (October 6). Defending a 395-run target, the hosts rode on brilliant spells from Ravindra Jadeja and Mohammed Shami to seal the deal and take a 1-0 lead in the three-Test series. Shami took five wickets and Jadeja scalped four, while R Ashwin took one to equal Sri Lankan great Muttiah Muralitharan in becoming the joint-fastest to 350 wickets. Get here ball-by-ball commentary, highlights of fifth day's play of India vs South Africa at ACA-VDCA Cricket Stadium, Visakhapatnam. (SCORECARD | CRICKET NEWS)

Virat Kohli: "I think the wicket played really good for the first three days. We lost one session so it was going to be a bit tougher. But once you have 500 on the board, it's difficult for the opposition. Mayank and Rohit played brilliantly. Pujara too in the second innings. It was a hard grind though because of the weather and the pitch slowing down. It's all about the attitude. If fast bowlers step out thinking, spinners are going to do the job, then it's not going to happen. But fast bowlers have been brilliant."

Faf du Plessis: "India batted really well in the first innings. We fought well but the second innings was tough. Rohit played really well. I thought up until this morning we competed really well. You can always sit after a game like this what you can do but apart from Shami this morning, the seamers' job was of holding. On a day five pitch, things happen quicker, but it's the nature of Test cricket."

Mohammed Shami: "It's difficult to bowl on such a wicket because it was getting slower. So the plan was to bowl at the stumps. Jaddu and Ash bowled well. We knew variable bounce and reverse swing would help us in the second innings. So we tried to attack the stumps. It was important to get the top batters out as early as possible."

13:47 hrs IST: OUT! That's it. India register a convincing 203-run win. Shami completes a five-for. Length ball that find Rabada's outside edge, and Saha does the rest. It's a great win for Kohli's side. Lot of positives for them! India now have 160 points on the World Test Championship table.

13:25 hrs IST: OUT! Piedt's solid show comes to an end. Full from Shami, outside off, the South African (56) looks to drive away from the body but gets an inside edge on to the stumps. India one wicket away from victory now. Kagiso Rabada comes to the crease.

Phil Foden's lack of game time at Manchester City will not dissuade youngsters from joining the Premier League champions, according to Pep Guardiola. Former Barcelona and Bayern Munich boss Guardiola has frequently spoken of his admiration for Foden, calling him "the most talented player" he has coached, but the teenager has still managed just 10 minutes as a substitute in the Premier League this season. READ HERE

12:41 hrs IST: FOUR! Length ball from Ishant, outside off, and Piedt helps this past slip towards third man for a boundary. No fielder there. South Africa are 125/8. Piedt 36*, Muthusamy 23*

12:28 hrs IST: Welcome back. Jadeja to start after lunch

Asian champion Gopi Thonakal finished 21st in the men's marathon race as India ended their World Athletics Championships campaign with mixed results at Doha, on Sunday (October 6). Laggards at the world stage, the 27-member Indian team was not expected to win any medal but it performed better than expected in this world championships with three finalists -- in mixed 4x400m relay, men's 3000m steeplechase and women's javelin throw. READ HERE

11:48 hrs IST: That's lunch. India the dominant side right from the word go, taking seven wickets in 33 overs. We will be back soon. Stay tuned!

11:40 hrs IST: STAT ATTACK - Rohit scored 303 runs in his maiden Test as an opener - the most by any player. The previous best were Tillakaratne Dilshan's 215 runs against New Zealand in Galle in 2009.

India have requested to extend the first session by 15 minutes.

10:53 hrs IST: WICKETS! Jadeja gets the better of Markram (39), Philander (0) and Maharaj (0) in an over. The Indian was on a hat-trick but Piedt negotiated that delivery. 'Sir' Jadeja. You can't keep him out of the game! Turning out to be a dream session for the hosts. Pitch doing a lot more as compared to the last four days. South Africa are 70/8.

Former India captains, Sourav Ganguly and Mohammad Azharuddin, have been nominated from their respective associations - Cricket Association of Bengal and Hyderabad Cricket Association - as representatives at the upcoming BCCI Annual General Meeting, set to be held on October 23.

10:35 hrs IST: OUT! SHAMI - YOU BEAUTY! Length, around off, De Kock looks to defend, but the ball comes back in and crashes into the off-stump. Also, the lack of bounce contributed to the dismissal. Senuran Muthusamy comes to the crease. South Africa are 60/5.

10:26 hrs IST: OUT! Short of a length delivery from Shami, it seams back in, keeps low to shatter the off-stump. Du Plessis, who has been leaving a number of balls around off, can't believe what just happened. Second wicket for the Indian. Quinton de Kock, who hit a century in the first innings, comes to the crease. South Africa are 52/4. Drinks are on the field now.

10:20 hrs IST: Jadeja comes into the attack. He gets some sharp turn. Markram (26*) and Du Plessis (9*) need to be watchful here. Not exactly a minefield for batsmen. India's batting on this track in the second innings was an exhibition of the runs one can score if only one applies himself. South Africa are 48/3

10:09 hrs IST: FOUR! Full from Ishant, on the pads, and Du Plessis whips this away through square leg. Shot! Footwork was really good from him. South Africa are 38/3. Markram 16*, Du Plessis 9*

Meanwhile, Ole Gunnar Solskjaer maintains he can turn Manchester United's fortunes around - but only if he is given sufficient time at the helm. The Red Devils head to Newcastle United on Sunday after a disappointing nine points from their first seven Premier League games of the season. READ HERE

09:52 hrs IST: FOUR! Too straight from Shami, strays on the pads this time, and Du Plessis flicks this to fine leg. Easy pickings! South Africa are 24/3. Markram 7*, Du Plessis 4*

09:44 hrs IST: OUT! A length delivery from Shami, keeps low, Bavuma tries to adjust, but can't bring his bat down on time. Goes right through him! South Africa in all sorts of trouble. They need to show a lot of determination to survive the day. Skipper Faf du Plessis comes to the crease. South Africa are 20/3

09:39 hrs IST: OUT! ASHWIN COMPLETES 350 WICKETS! Tossed up, wide of off, De Bruyn looks to cut this away, but finds the ball dipping, and ends up playing it off the inside edge on to his stumps. Temba Bavuma comes to the crease. South Africa are 19/2

09:35 hrs IST: FOUR! Length ball from Shami, just a bit of away movement, De Bruyn looks to hit through covers but gets a thick outside edge between slip and backward point for a boundary. Seven off the over. South Africa are 18/1. De Bruyn 10*, Markram 5*. Ashwin comes into the attack.

09:31 hrs IST: Shami will start for India. Markram and de Bruyn at the crease. Here we go.

09:04 hrs IST: Rohit smashed 13 sixes - six in the first innings and seven in the second. He went past the previous record of 12 by Wasim Akram against Zimbabwe in Sheikhupura in 1996-97.

08:55 hrs IST: The Proteas lost first-innings centurion Dean Elgar for two in fading light, Ravindra Jadeja getting the late breakthrough with the aid of DRS after his LBW appeal was initially rejected by on-field umpire Richard Illingworth.

Aiden Markram is unbeaten on three, while Theunis de Bruyn is five not out.

DID YOU KNOW? Rohit Sharma became the sixth India batsman to score centuries in each innings of a Test. The ones to do so before him are Vijay Hazare, Sunil Gavaskar (thrice), Rahul Dravid (twice), Virat Kohli and Ajinkya Rahane.

08:41 hrs IST: Hello and welcome to Outlook's live coverage of the fifth and final day of the opening Test between India and South Africa.