India need just two more wickets to clinch a 3-0 win over South Africa. The visitors, after being asked to follow on, were 132/8 at stumps on Day 3 of the final Test in Ranchi. Get here highlights of IND vs SA, 3rd Test, Day 3 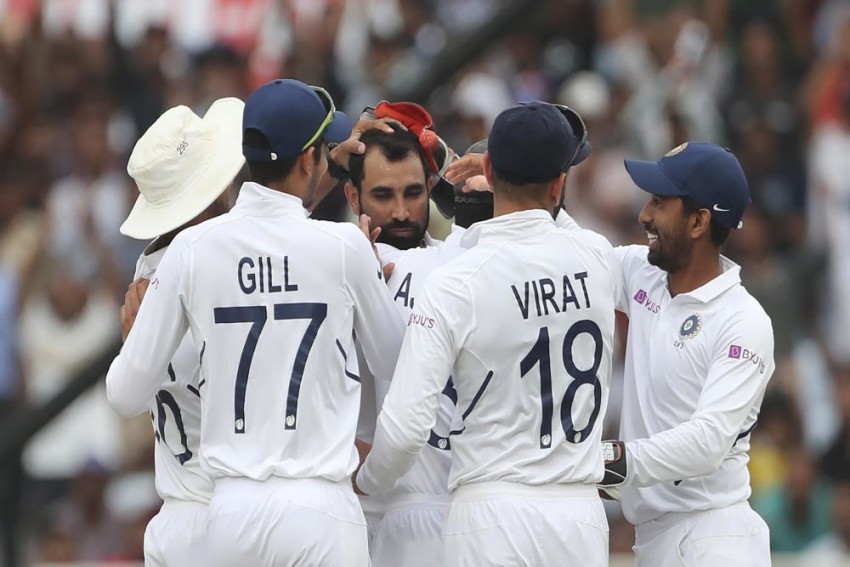 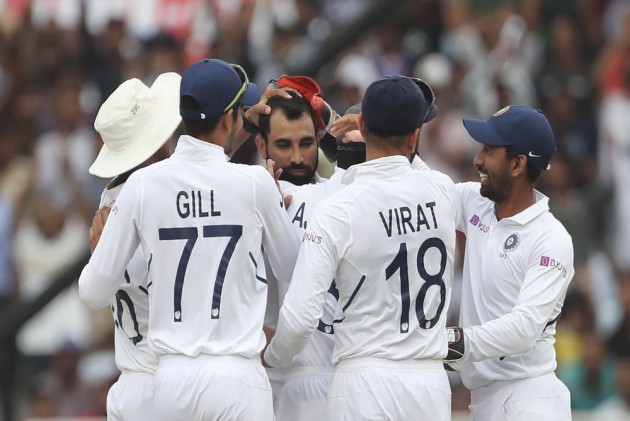 Mohammed Shami claimed three key wickets on Monday (October 21) as India eyed a series whitewash after making South Africa follow on in the third Test. At stumps on Day 3 in Ranchi, the tourists were trailing India by 203 runs. South Africa were bowled out for 162 in their first innings. Follow highlights of IND vs SA here (SCORECARD | CRICKET NEWS)

17:12 hrs IST: That'll be stumps. South Africa 132/8. De Bruyn 30*, Nortje 5*. India on cusp of series whitewash! Have hardly seen the Proteas being thrashed like this. India, on the other hand, are really the side to beat at the moment.

17:00 hrs IST: OUT! Ashwin removes Rabada, gets his first wicket of the match. South Africa eight down. We'll have another 2-3 overs.

16:42 hrs IST: OUT! Piedt comes down the track, Jadeja sees this and bowls this a bit quicker and flatter. The South African misses, and it hits the top of leg stump. Rabada comes to the crease. South Africa 98/7

16:19 hrs IST: WICKET! Excellent work from Nadeem! Direct hit at the bowler's end from square leg. Linde is well short of the crease. He goes for 27(55). Theunis De Bruyn comes to the crease. South Africa are 67/6

Saha hit on the left thumb. Rishabh Pant will take the gloves.

15:24 hrs IST: OUT! Length ball from Umesh that holds its line, Klaasen is late on the shot. He's caught on the crease and umpire raises his finger straightaway. Dane Piedt comes to the crease. South Africa 36/5. India on a rampage!

In case Elgar can't resume his innings, the Proteas can have a concussion substitute.

14:37 hrs IST: Elgar hit on the helmet! He's on the ground. India players rush towards him to see if he's alright. The physio rushes in. The umpires have called an early tea. Join us in 20 minutes!

14:32 hrs IST: WICKET! EDGED AND BAVUMA IS OUT! He's drawn forward with the length, Bavuma gets a thin edge as the ball moves away and Saha takes a fine catch. Heinrich Klaasen comes to the crease. South Africa are 22/4

14:24 hrs IST: OUT! Plumb and Du Plessis is gone! He's reviewed, but shows no bat and three reds. It's in line, and will hit the top of off stump. Second wicket for Shami. This is turning out to be a dream series for India. South Africa are 18/3. Bavuma comes to the crease.

14:03 hrs IST: OUT! Perfect length from Shami, just straightens after being angled in. Hamza is a little late on it. Beats the outside edge, thereby crashing into off stump. Faf du Plessis comes to the crease. South Africa are 11/2

13:56 hrs IST: OUT! Good length delivery from Umesh, around middle and off, De Kock plays down the wrong line in defence. Hint of away swing and that's enough to beat the outside edge and hit the off stump. What a start for India! Nine good balls away from making it 3-0. Zubayr Hamza comes to the crease. South Africa are 10/1

13:51 hrs IST: FOUR! Half-volley from Shami, no footwork from De Kock and ends up getting a thick edge that flies comfortably over the slip cordon. South Africa are 5/0. Umesh comes into the attack.

13:48 hrs IST: All set for South Africa's second innings. De Kock and Elgar are at the crease. Shami to start. Two slips, a gully, a mid-wicket and cover in place

13:37 hrs IST: OUT! Nadeem gets Nortje. India have enforced the follow-on. The last time South Africa followed-on twice in a series was against England at home in 1964/65.

13:30 hrs IST: OUT! Length ball from Umesh, wide of off, Linde looks to drive but gets an outside edge and Rohit Sharma, the fielder at second slip, makes no mistake. Third scalp for Umesh. Lungi Ngidi comes to the crease. South Africa are 162/9

13:19 hrs IST: Time for drinks! South Africa 161/8. Linde 36*, Nortje 4*. Both batsmen have batted well. Kohli has tried almost all his bowlers but hasn't been able to break the stand. Time to bring himself into the attack?

13:04 hrs IST: India have managed to pick up two wickets after lunch. But Linde (32*) and Nortje (4*) have hung in there for sometime and would be looking to drag the innings further. South Africa are 156/8

12:22 hrs IST: WICKET! Umesh with a direct hit! Rabada hits to mid-off, the Indian dives to stop it, recovers quickly and fires a throw at the non-striker's end. This is poor cricket from the Proteas (130/8). Anrich Nortje comes to the crease.

12:17 hrs IST: OUT! Keeps low and Piedt has been given out LBW. Ball angles in, beats him for pace and hits him on the left pad. That's plumb! Second wicket for Shami. Kagiso Rabada comes to the crease. South Africa are 129/7. Ashwin comes back into the attack.

12:12 hrs IST: Welcome back! Piedt on strike. Shami to begin

Andy Murray claimed a fairy-tale victory as he rallied to beat Stan Wawrinka in the final of the European Open. He sealed his first ATP Tour crown since March 2017 by coming from behind to win a battle lasting two hours and 27 minutes in Antwerp. READ HERE

11:32 hrs IST: That's lunch. South Africa 129/6. Linde 10*, Piedt 4*. Another brilliant session for India. The visitors still trail by 368 runs. The hosts will be aiming to wrap up the tail quickly. Or will we see South Africa's tail adding some important runs like they did in Pune? We'll be back in 35 minutes. Stay tuned!

11:10 hrs IST: OUT! Nadeem gets his first wicket! Flights this, pitched around middle and leg, Bavuma steps out to defend but the turn on it takes him by surprise. Saha grabs it and while the batsman tries his best to get back inside the crease, he fails to do so. Two wickets in as many overs. South Africa (114/5), once again, in trouble. George Linde, who took four wickets, comes to the crease.

11:03 hrs IST: OUT! Straighter delivery from Jadeja, around middle and leg, Hamza looks to punch it off the back foot, but the ball goes through him and hits the leg stump. After playing a fine 62-run knock, the youngster departs. Debutant Heinrich Klaasen comes to the crease. South Africa are 107/4. Bavuma 32*

10:33 hrs IST: Drinks are on the field now. South Africa 85/3. Hamza 50*, Bavuma 22*. The Proteas lost Du Plessis early but Hamza and Bavuma have helped them make progress after that. They'll need these two to carry on.

10:29 hrs IST: SIX! Ashwin offers flight, Hamza decides to take him on and smacks it over mid-on for a maximum. What a way to get to your maiden half-century! Needs to get a big one here. South Africa 81/3. Bavuma 18*

10:08 hrs IST: BOUNDARIES! Pitched up from Shami, Hamza presents the full face of the bat and caresses it past the bowler. The second one was a thick edge that raced between third slip and gully. Expensive over from Shami, nine off it. South Africa 51/3. Hamza 32*, Bavuma 10*. Some spin now. R Ashwin comes into the attack.

09:55 hrs IST: FOUR! Fuller delivery from Umesh, outside off, Hamza leans forward and drills it away through the covers. Easy pickings! Costly over from the Indian, 12 off it. South Africa 37/3. Hamza 19*, Bavuma 9*

Meanwhile, an Afghanistan player entered the history books as the first to be picked in the draft for the inaugural season of The Hundred, while Andre Russell was snapped up but Chris Gayle and Lasith Malinga went unsigned. FIND FULL LIST HERE

09:50 hrs IST: FOUR! Short ball from Shami, wide outside off, and Bavuma slashes away behind point for his first boundary. South Africa are 25/3. Bavuma 9*, Hamza 7*

09:36 hrs IST: OUT! Umesh - you beauty! Length ball, nips away to beat Du Plessis' outside edge as he looks to defend and the stumps are rattled. Absolute peach. Dream deliyery for any pacer! Seven off the over. South Africa 16/3. Temba Bavuma comes to the crease. He's had a poor series so far. Shami comes back into the attack.

09:31 hrs IST: All set for play. Three slips in place for Hamza, who will face the first ball. Umesh to resume proceedings.

Enoch Nkwe, South Africa's team director - "We've struggled to respond to pressure at certain points. We understand this is a rebuilding phase but that's no excuse. At certain times we've had opportunities to put India under pressure, but we haven't been able to sustain it. Just looking at the team spirit, they understand it has been tough. They were determined to close the day with no wickets lost but the Indians were fired up and you could see how they wanted to put us on the back foot. It's upto us, how we want to respond."

BIG NUMBER - Seven centuries scored by India in the ongoing series against South Africa - the most in a series against the Proteas surpassing six in the home series in 2009-10.

09:05 hrs IST: The groundstaff are peeling the covers off. No threat of a delayed start. But it's not completely sunny. Some grey clouds hovering over the ground.

DID YOU KNOW? This was the second instance of Indian batsmen scoring three double tons (Mayank Agarwal, Virat Kohli and Rohit) in a single series. The previous one came against New Zealand at home in 1955-56 (Polly Umrigar and Vinoo Mankad (2)).

08:30 hrs IST: Hello and welcome to Outlook's live coverage of Day 3 of the third and final Test between India and South Africa.