Follow here highlights of third day's play of 1st Test between India and Bangladesh, being played at Holkar Stadium, Indore 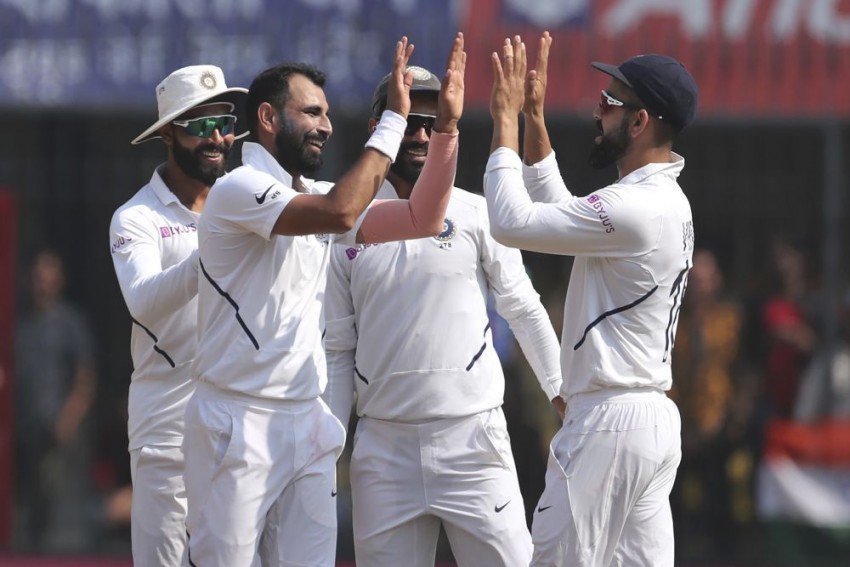 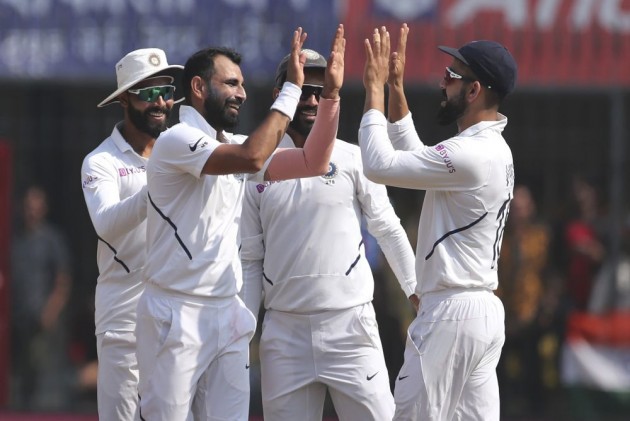 India (IND) beat Bangladesh (BAN) by an innings and 130 runs in the Indore Test to go 1-0 up in the two-game series. India declared their first innings at 493/6 after bowling out Bangladesh for 150 in the visitors’ first essay. In their second innings, Bangladesh were bundled out for 213. For the hosts, Mohammed Shami was the pick of the bowlers, finishing with a match haul of 7/58. Catch highlights of IND v BAN, 1st Test, Day 3 here (REPORT | SCORECARD | CRICKET NEWS)

Virat Kohli - "Don't know what to say (laughs), another clinical performance. Very professional with the bat, playing five batters with one guy taking responsibility is what we want with overseas tours coming up. Hats off to the boys. These guys (our fast bowlers) are on top of their game, when they bowl, it looks like any pitch is a good pitch, Jasprit isn't here but this is a dream combination for any captain. Having strong bowlers the most important thing in any team."

Mohammed Shami - "We enjoy each other's success. [On bowling with pink ball] What I try to do is to pitch it on a good spot, nothing special. I just try to execute good line and length."

Ishant Sharma - "There is not about being senior. It'a a healthy competition. I am only 31 but having played almost 100 games, the body does feel old. Looking forward to pink-ball Test."

Umesh Yadav - "The incentive for us at home is, if you take more wickets, you get to bowl more. [On his batting] We try to score as much as possible. If last four make 25 each, that's 100 for the team. Batting coach and captain just ask me to enjoy our batting. In Ranchi, Virat asked me to score quickly. I just went out to try and hit, it came off the middle and you feel confident. There have been times in England when I have stayed with the batsman. Now it was time to enjoy, so I just did that."

15:35 hrs IST: WICKETS! That's it. India win by an innings and 130 runs, go 1-0 up in the two-match Test series! What a performance! Sheer class by both batsmen and bowlers. Slip fielding is an area where the hosts need improvement. On the other hand, the visitors have a lot of ponder. Won't be easy to make it 1-1.

15:23 hrs IST: OUT! Short one does it for Shami. Gets his fourth. A bouncer aimed at Taijul's head, the ball takes the shoulder of the bat, Saha comes forward and takes it easily.

14:36 hrs IST: OUT! Umesh sends Mehidy (38) back to the pavilion. India register a wicket in the first over after tea. It was a short length ball, with extra bounce, and ricocheted onto the bails. Bangladesh 194/7. Taijul Islam comes to the crease

14:13 hrs IST: That's tea. Bangladesh 191/6. Rahim 53*, Mehidy 38*. Kohli turned to spin for most of this session. While Ashwin bowled well, Jadeja wasn't that effective. Rahim was dropped initially by Rohit, but has hung in and hit a half-century. We'll be back in 20 minutes. Stay tuned!

14:00 hrs IST: Guess it's time to bring Shami back into the attack and a change of ends for Ashwin could be helpful for the offie

13:35 hrs IST: FOUR! Flatter delivery from Ashwin, wide of off, Mehidy goes back and carves it away wide of backward point for a boundary. Bangladesh 155/6. Rahim 40*, Mehidy 15*

13:23 hrs IST: OUT! Liton (35) steps out to hit over the top, can't get the elevation and Ashwin takes a smart return catch. A threatening partnership has been broken. Mehidy Hasan comes to the crease. India four wickets away from going 1-0 up.

12:51 hrs IST: FOUR! Pitched up from Ishant, just outside off and that's a boundary. Comes a touch forward and drives it through cover. 100 comes up for Bangladesh

12:32 hrs IST: OUT! Length ball from Shami, outside off, Mahmudullah (15) pokes at it and gets a healthy edge to second slip - Rohit was the fielder. Half the Bangladesh side are back in the pavilion. Liton Das comes to the crease. Bangladesh 76/5

12:20 hrs IST: Magnificent over from Jadeja, just one from it. Sharp turn for him. Will be an interesting battle! Bangladesh 64/4. Rahim 9*, Mahmudullah 8*

Lionel Messi was delighted with Argentina's win over Brazil, saying the rivalry between the South American nations was stronger than ever. On his international return, Messi scored the only goal of the game in Riyadh as Argentina recorded a friendly win. The star tapped in a rebound after his penalty was saved by Alisson, while Gabriel Jesus earlier put a spot-kick wide for Brazil. READ HERE

11:33 hrs IST: That'll be lunch. Bangladesh 60/4. Rahim 9*, Mahmudullah 6*. The Indian pace trio of Ishant, Umesh and Shami have been too good for the tourists. Day three pitch, no overs to Ashwin and Jadeja yet. We'll be back in 40 minutes!

11:20 hrs IST: Two of the most experienced Bangladeshi players at the crease now. While India are expected to take a 1-0 lead, it would be interesting to see if this pair can put up a fight and show some character in an otherwise one-sided Test.

10:57 hrs IST: OUT! Shami strikes again as Bangladesh slip to 44/4. Bouncer, Mithun looks to pull but ends up mistiming a dolly to mid-wicket. Easy catch for Agarwal. Two wickets in two overs for Shami. Mahmudullah comes to the crease

10:42 hrs IST: OUT! Huge appeal for LBW as Mominul (7) is hit on the pad. Shami brings it back from around the stumps, given not out and Kohli reviews. Hawkeye confirms the ball would've crashed onto leg stump so Rod Tucker has to change his decision. Mushfiqur Rahim comes to the crease. Bangladesh 38/3

Mohammad Shami comes into the attack

10:33 hrs IST: Drinks are on the field now. Another hour where the Indian pacers have been impressive. Superb stuff from Ishant and Umesh. They have made the ball talk and the batsmen have struggled to combat it. Bangladesh 33/2. Mithun 14*, Mominul 7*

10:07 hrs IST: OUT! Goes through the defence. Length ball from Ishant, from around the wicket, it comes in after pitching. Shadman (6) looks to defend but ends up leaving enough gap between the bat and the pad for the ball to sneak in and hit the stumps. Brilliant! Just the kind of start Virat Kohli would have wanted from his bowlers. Mohammad Mithun comes to the crease. Bangladesh 16/2

09:59 hrs IST: OUT! Fuller from Umesh, just around off, and swings in. Kayes (6) went for the drive but managed only an inside edge. The ball clatters into the leg stump. India have the first breakthrough. Kayes never looked at ease. He could have played that with a straighter bat. Mominul Haque comes to the crease. Bangladesh 14/1

09:54 hrs IST: Get a feeling India have declared at a perfect time. They wanted Bangladesh to bat in the morning session without any waste of time (and conditions too). Have to admit the World Test Championship is a great idea! Solid competition! At the end of the day, it's all about those winning points, be it 60, 40, 30 or 24.

Alexander Zverev defeated Daniil Medvedev in straight sets to progress at the ATP Finals and end Rafael Nadal's hopes of glory in London. The reigning champion set up a semi-final showdown with Dominic Thiem, while the other last-four clash will see Stefanos Tsitsipas face Roger Federer. READ HERE

09:36 hrs IST: Nice and tidy start from Ishant. No margin for error. Bangladesh 3/0 after the first over. Shadman 3*, Kayes 0*. Umesh Yadav comes into the attack. He took two wickets in the first innings.

09:31 hrs IST: Time for live action. Imrul Kayes and Shadman Islam are at the crease. Ishant Sharma to open the attack

09:00 hrs IST: India have declared overnight. The tourists will need to make 343 to avoid an innings defeat. At the moment, taking the game into the fourth day seems difficult.

08:56 hrs IST: Mayank Agarwal - "In terms of mindset, the fear of failure and letting go of it helped me change a lot. After that I got hungry for runs. There have been times where I haven't gotten runs. Everytime I get set, I try to make it a point to convert into a big score. Definitely enjoyed it (about his journey with the Indian team so far). Playing my first game at Melbourne was something special and having contributed to the team's win and India winning the series down under for the first time was a top feeling. That's the feeling that wants me to keep going and everybody else to go out there and win tournaments for the team. It is about playing one ball at a time and keep batting as long as possible. He's (Ajinkya Rahane) a senior pro, he's played a lot of Test cricket and kept guiding me throughout. The plan was to get a small partnership and take our time. Be cautious, then it was about building it more and more."

08:45 hrs IST: Mayank Agarwal's 243 is the fifth-highest by an Indian opening batsman in Tests. All the four higher scores belong to one player - Virender Sehwag.

Lionel Messi Told Me To Shut Up, Says Brazil Boss Tite After 0-1 Loss To Argentina